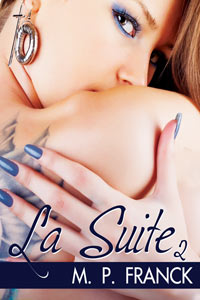 “Come and sit down. I’ve made tea. Is that all right?” Gaëlle said, as she showed Gabi into her apartment a week later.

“I drink far too much coffee, so yes, tea is great.”

They chatted for half an hour, tentative conversation. Gaëlle attempted to appear cheerful, and Gabi was apparently endeavouring to be careful in her choice of subjects.

“I can see you looking around. Do you want to have the tour?” Gaëlle asked.

“This is my bedroom,” Gaëlle said, opening the door.

“I have far too many clothes, I know, but I haven’t got round to sorting them out yet,” Gaëlle told her, leading Gabi into the second bedroom.

“Another wardrobe, Gaëlle?” Gabi said, turning to her. “You can’t have enough clothes to fill two! May I look?”

Before Gaëlle could react, Gabi had opened the doors wide.

“You never wore dresses like this at work,” Gabi said, looking hard at Gaëlle.

“Neither did you!” Gaëlle retorted. “It isn’t a work dress.”

“That’s the least you can say! You must look very sexy in it.”

“Yes, well…shall we finish our tea?”

Gabi’s visit ended with an agreement that they would meet again, a week later. It became a regular feature over the following months, and Gaëlle felt better for the relief of light conversation and gossip.

Gabi made herself comfortable on the sofa facing Gaëlle. They had finished their drinks, coffee this time, and were sitting in companionable silence. The sounds of the city drifted in through the open window.

“You know I said that we all looked up to you, Gaëlle?” Gabi began. “Well, there’s an extra reason for that in my case.”

“Well… you remember I mentioned about how we chatted when I was just a beginner?”

“Look, to say what I’m going to tell you, I need to go back a bit. You know how people often play tricks on new staff? My dad was a mechanic, and they used to send apprentices to get a left-handed screwdriver and so on.”

“Yes, that sort of thing. Well, it was the tradition when I started in my current job, four years ago, to load the new arrival’s desk with mail, as if that were the usual quantity. Most of it was junk, treatments for baldness and impotence, stuff like that. Porn magazines, too, of course, and sex catalogues, but with the real stuff hidden in among it. You had to sort it so you didn’t throw out some minister’s next speech! I’d been warned, so I went through it before I slung most of it straight in the bin, but in that process, on the front of one of the catalogues on my desk there was a photo of something that caught my eye. Can you guess what?”

She paused and looked across at Gaëlle. There was no response.

“It was the remote control for a wireless vibrating egg,” Gabi announced. “And I knew where I’d seen an identical one…that day, on the desk in your office!”

“I’m right, aren’t I?” Gabi went on. “That wasn’t a crumb you choked on, that was my oh-so-perfect, always in control boss, having a full-on, can’t-control-it orgasm!”

“And that made me admire you even more for your daring! Did you know the girls were all sure that you had a secret sex life? People who’d met your Jérôme said there was a twinkle about you both when you were seen together. There was no way you could be as asexual as you tried to appear, and we were convinced that you dressed so formally just to hide the fact that you had a sexy body! When I saw that remote control I knew we’d been right. The dress I saw in your wardrobe just confirmed it.”

“I was a lot younger then.”

Once A Rogue (MF)
Jayne Fresina
In Shelf
$3.99
Tweets by
sirenbookstrand