Caitlyn Spencer is a celebrated American archaeologist known for “visioning” the past and finding archaeology sites to be mined almost as if by magic and for having an unusual affinity for and understanding of the ancient worlds in which she works. When, in the early 1990s, she arrives in Mediterranean Cyprus on a Fulbright scholarship to help excavate the Chalcolithic era site at Kaliana, however, these “visions” become far more than imagination. It’s almost as if she has lived there before, in past lives, and has delved into the island’s historically rich and significant intrigue.

Darker and more sinister even than the visions, a tragedy in her own past revisits her in Cyprus, and she becomes embroiled in drug trafficking and arms dealing. Worse, she has no idea who she can trust . . . and her innocence could cost her her life.

Much more than just a mystery romance on a magnificent Mediterranean island, Laughter’s Echo yields up a series of thought-provoking déjà vu snapshot visits back into history almost to the beginning of human existence, a fascinating travelogue of a culturally and historically rich civilization, and a conundrum on what to preserve as more important to history than other eras in the history of humankind.

Each book in this series stands alone, but they are also all connected in various ways and form the different parts of one story. 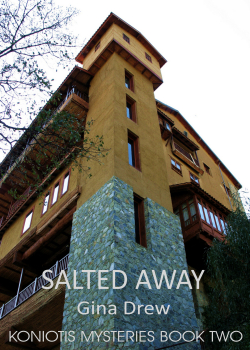 The cliff they were standing on dropped almost straight down for about forty feet and then immediately leveled out to a very flat, rocky margin of a couple of hundred feet that stretched to the sea. The lights of Limassol could clearly be seen in that direction. To the west, the cliffs that started at Curium undulated off in a curve that reached toward Paphos. Several ships, sporting multicolored party lights, were running just off the coast, and the sky was clear and packed with bright stars.

Caitlyn had to admit that this was quite a sight. She didn’t have long to enjoy it, however. Viktor, who had been standing much too closely behind her for comfort, picked just that minute, when her defenses were down and she was beginning to appreciate the view, to wrap his arms around her and bury his face in the crook of her neck. As she struggled, he seemed to pick her up and to sway back and forth precariously close to the edge of the cliff. Having been caught almost completely off guard, she was initially preoccupied with the thought that this was a very strange, rough, and clumsy sort of a sexual pass. She was incongruously on the verge of breaking out in giggles at the vision of multiple Russian couples—all in this same strange sandwich-like pose—waddling around a small park in aimless, never-intersecting patterns. In other words, she was getting pretty hysterical.

Emitting animalistic sounds, he was ripping at her blouse sleeves now, still with his arms wrapped around her and still swaying toward the cliff edge in his silly dance. His dance of passion or his dance of death? Or both?

However, Caitlyn hadn’t been raised to be a victim. She got an arm free enough to be able to punch back an elbow up under Viktor’s rib cage with enough force to cause him to drop one of his arms. She simultaneously brought the heel of her good foot down hard onto the top of his foot and twisted toward the side where he had dropped his hold. Despite the bad ankle—and helped by Viktor having lost his balance and fallen off to the side—Caitlyn darted behind a column that had once helped define the altar area of the pagan temple that had been displaced by the later Christian basilica. Not having any idea how long she had before Viktor recovered his balance and started in pursuit, Caitlyn slid off toward a complex of stone foundations ranging from four to six feet in height that were located to the west of the main basilica area.

She was breathing heavily and was moving about so wildly that she couldn’t be completely sure whether or not she had just heard an eerie cry from the direction of the cliff side. All she could think of was that she needed to move back through the basilica toward the area where the car was parked but that she couldn’t actually go to the car itself. Viktor would, of course, go to the car to cut off her escape and may already have started in that direction. She could not assume that he would not get there before she did. Also, she didn’t have the key to the car. Viktor had the key to the car. In fact, Viktor seemed to be holding most of the keys to the situation at the moment. “Gorilla,” Paul had called him. Gorilla was right! No, she had to move toward the parking area, but she had to reach some high place. Some high place where she could see out over the basilica but could not be seen from inside the ruins. Some place . . .

But, suddenly there was no place to go; no place to hide. Suddenly he was rising in front of her. Suddenly he was wrapping his arms around her again. Strong arms. And he was pulling her toward the wall and deeper into his clutches. She was weakening and she was screaming, but she couldn’t seem to even hear herself screaming. She was blackening out, still beating at his chest with her fists.