As Veronica moves from one steamy relationship to the next, life becomes more complicated. Her best friend Jeremiah has always been there for her, but is he more than a friend? And when Veronica finally meets up with her ex-husband’s divorce lawyer, she may find the humiliation she faced in the courtroom is nothing compared to what he has in store for her next. 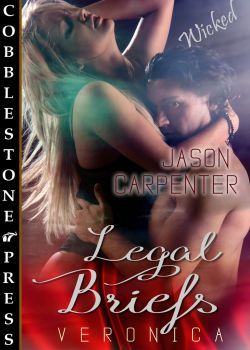 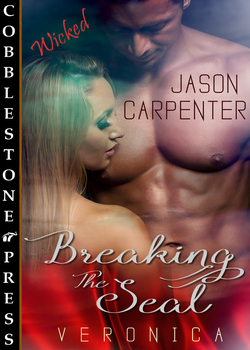 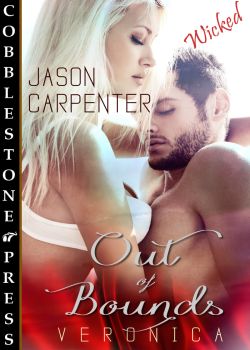 This is ridiculous.
The receptionist held the pamphlet out to Veronica. “Really, ma’am, you need to take this and read it.” The young woman emphasized “Ma’am” as if it were a curse against old age.

Veronica looked down at the pamphlet in her hands. Safe Sex And You: A Guide To Responsibility. The harsh glare of fluorescent bulbs bounced off the lime green walls of the Family Medicine Clinic. The lighting gave her skin a sickly glow, but it made the young beaming woman on the pamphlet look like a reject from a bad sci-fi film. She walked over and took a seat on one of the comfortable looking, but in all actuality torture devices, known as a waiting room chair.

Veronica looked around the waiting room. Only one other woman looked even close to her age. Every other female looked on the cusp of womanhood. Even the waiting room receptionist looked barely out of high school. Veronica sighed. Of course. Birth control. Another sad, troublesome remnant of the aftermath of divorce. For fifteen years, it wasn’t an issue. Her husband had a vasectomy after their second kid and that was that. Now that he was out banging barflies with his unloaded pistol, it was once again Veronica’s responsibility to deal with birth control.

And condoms…out of the question, Veronica thought. She had always disliked them. But dealing with a pregnancy at her age was also out of the question. So there she sat, surrounded by young women whom she hoped would never be dumb enough to make her mistake.

To fall in love.

To let their guards down.

“Hey,” a voice called out, derailing her bitter train of thought. She looked over and saw the other woman near her age had taken a seat near her.

“Did you know that you can get pregnant even if it’s your first time?” the stranger asked.

“What—” Veronica began before she saw the open pamphlet in the woman’s hands. In big bold letters it read: True or False: You Can’t Get Pregnant If It’s Your First Time.

Veronica let out a big laugh before she could stifle it. The younger women all looked toward her before they returned to their own reading material.

“Who the fuck did they write this for, preschoolers in Utah?” The woman crumpled it and expertly tossed it into a nearby wastebasket. The receptionist looked up at her and glared worse than the overhead lights. “Yeah, you saw what I did, what are you going to do about it?”

Veronica watched the woman stare down the receptionist. A moment later, the young secretary went back to shuffling paperwork and the woman turned to Veronica.

“Wow, you’re a bitch,” Veronica said with a note of compliment.

“You gotta fight fire with fire,” she responded. “I’m Claudia.”

“So, Veronica, what brings you to this state-of-the-art clinic?”

It was Claudia’s turn to laugh. She was beautiful, Veronica realized, especially in this moment. Long black straight hair framed her face but couldn’t contain her warm smile. But in those dark deep eyes, something harder seemed to exist.

“My husband left me, the jackass, and I need to get back on birth control. And my doctor just didn’t have an opening soon enough so, here I am,” Veronica said.

“Got a boyfriend?” Claudia asked.

“A few,” Veronica said with a smile.

“A few. Feels good, doesn’t it?” A smile crossed across Claudia’s face as she started nudging Veronica with her elbow.

“It does, actually,” Veronica said. “I could have done without the divorce and the years of lying to figure that out, though.”

“Yeah. My husband left me after eight years, last spring. Never been happier.”

“Fifteen for me,” Veronica said.

“Fuck.” A heavy moment passed between the two. “Kids?”

“Well, at least you got that out it.”

The air was thick between these two veterans of lost love. Veronica turned away and looked back down at the pamphlet. “It still seems like such a rip-off, you know? I gave him everything.”

“And he has nothing now,” Claudia said. “He lost you. In a few years his own children will despise him for what he did, if they don’t already.”

“No, they love him. They still love that asshole, and I whenever they come home I have to hear what awesome thing he did for them. And I’m trying to keep my life together, trying to actually get out there and meet people without feeling like a terrible mother. On top of that, I have some sicko leaving roses on my doorstep when I come home from a date. You know, I can’t figure out what’s worse.

“You have a stalker?”

Veronica turned back to face Claudia. Her face had tightened. All sense of compassion had disappeared.

“I wouldn’t call him a stalker. It might just be some—”

Claudia reached into her purse and pulled out a business card. She handed it to Veronica. “I’m not telling you how to live your life, but you need to take this very seriously.”

“Yeah, and I don’t think you need a professional to tell you this world is full of creeps. Trust me, nip this in the bud.”

“I’ll look into it,” Veronica responded.

Veronica smiled. “Will do.”

“Ma’am, ma’am,” the receptionist called out. Both Veronica and Claudia turned to face her. “Oh, I’m sorry,” she said with a sly smile. “Mrs. Wilson...”

“You call me ‘Ma’am’ or ‘Mrs.’ one more time…I dare you, I fucking dare you,” Claudia snapped back. “Is it time for my appointment?”

“Then that’s all you had to say,” Claudia replied with fake courtesy. She turned back to Veronica, who once again was laughing at Claudia’s antics.

“How have they not kicked you out of here yet?”

“I blow the doctor,” Claudia said nonchalantly. “Seriously, call me if you need anything. I also work with a group of women, it’s this whole self-defense class downtown. Call me and I’ll hook you up with that too. It’s run by a real bad ass. Hell of a workout, too.”

“Sounds fun,” Veronica said before she realized how condescending it sounded. “I mean that. It sounds like something I’d want to do.”

Claudia stood. Her long lean form shadowed over Veronica. “Listen, there’s a lot of sick men out there. Right now, we’re tracking a serial killer. He preys on prostitutes, but I think he may be ready to switch MO’s. Women like us, out there, doing what we do, we need to watch each other’s backs. We’re outnumbered,” Claudia motioned toward the receptionist, “and the world judges us. Don’t take those facts for granted.”

Veronica slowly nodded as Claudia walked away. The receptionist once again dared to shoot daggers at Claudia out of the corner of her eyes. Claudia didn’t miss a beat as she walked past the girl and quipped, “What are you looking at, you fucking fetus?” Once again the receptionist pretended to be busy. Veronica slipped the business card into her wallet.

The world judges us. Claudia’s words hung in Veronica’s mind. If I could only stop judging myself, she added as she once again waited alone in the clinic.