Let Me Be Brief

In Let Me Be Brief, Jordan McKenzie has worked as a legal secretary in the San Francisco Bay Area for a number of years for a quasi-public entity. Not long ago she moved from one branch of her law firm, Brown, Holt & Lister, to another location where the supervisor, Ophylia Millard, is something of a micromanager. No one is happy with Ophylia’s management style and most of the staff wishes she’d move on as quickly as they can. Jordan tries to keep her head down and out of the line of Ophylia’s fire until she arrives at work one day to find said supervisor dead. Worse, Jordan also finds herself as the number one suspect.

Relying on her knowledge and experience as a top litigation secretary, she begins her own investigation to clear her name. Determined to prove her innocence Jordan utilizes the same discovery techniques she’d use as a legal secretary. Can she convince the local detective bent on arresting her that she's really just an innocent victim? Or will she be using her legal skills at the gray bar inn (commonly called the local jail)? 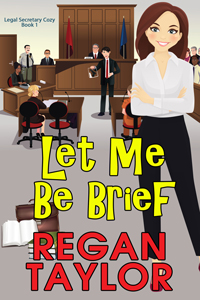 Let Me Be Brief

“What the…?” Among the last things I needed this morning was seeing my supervisor, Ophylia Millard’s fanny up in the air while she bent over the porcelain god…or would that be goddess…in the ladies’ room of Brown, Holt & Lister, attorneys at law. I mean really, did she have to number one, choose the larger accessible stall to do whatever it was she had to do. And number two, leave the door open for all and sundry to see? Mind you, I don’t care if the woman drinks herself into oblivion every night. That’s her choice, you know? And I don’t care if she has to get sick the next morning or that she chooses to do it at work. But please, a little decorum here in the office would be nice.

At least close the door.

And what was she doing here at work at 7:45 in the morning? The woman didn’t usually show up until at least 9, if not a bit later, clomping in with her over the knee faux leather boots, sheer shirt over a ratty slip and cleavage hanging out for the world to see. Kind of like a pole dancer gone bad. Nope, not our Ophylia.

I’d always thought Brown, Holt & Lister, BHL to those of us in the know, was a professional law firm. You know the type—tasteful reception area with fresh flowers and lush green plants, comfy cushioned chairs, crystal candy dishes on real wood tables bearing several current newspapers and legal magazines. The kind of place where those real wood desks, chairs, bookcases and other furniture all match. Where coffee is made from fresh ground beans, tea doesn’t come in a generic bag, and the hot chocolate is made with real milk. Sure, we’re a quasi-governmental entity—we provide legal services to one of the big state agencies. But we’re still a law firm

And by the way, yes, we do serve hot chocolate. Some of our clients bring their children and we like them to feel at home, too. Did I mention that the beverages, tasty tea cakes, and cookies, are served on real china?

That however describes our main office—the venue where most of our clients, diverse clients, come to do business. We’re one of those firms that’s quasi-private and quasi-public sector. We do business for the state so we’re bound by some of the state’s requirements, but we also have some things that are straight out of the private sector—like the hot chocolate and gourmet coffee. We handle a wide variety of legal matters from wills and trusts, to torts, to business mergers, and everything in between--including a regulatory branch, hence the quasi part. Said regulatory branch is where I am currently sentenced, errr, doing my job. I used to work in the main office and loved my job. After the hectic, sometimes dramatic days and nights as a police dispatcher about five years ago, I opted to leave the emergency field and return to the my tried and true profession as a legal secretary at Brown, Holt & Lister. It was a dream job until not so long ago. The seven years I worked as a dispatcher were interesting, but nowhere near as fulfilling as my work as a legal secretary. Over the years, I’ve worked for some brilliant attorneys who worked on totally fascinating cases, and I had great co-workers. BHL had some of the best.

And then the office got a new business manager, and with the excuse of high rents in downtown San Francisco, moved across the bay to Oakland. With rents in the City going sky high and out of control, along with some of the larger clients being based across the bay, the powers that be decided a move to a lower rent, yet up and coming part of town, was in the firm’s best interests. So they moved.

Or most of them did.

The main office that is—and if I’d stayed with that office, it would have taken me three buses instead of my usual one, and added an extra hour give or take to my commute from the tiny town of Red Hill just north of the Golden Gate bridge and Sausalito. Two satellite offices were opened in other parts of town, and due to some other changes in the office I opted to go to one of those smaller offices, rather than deal with crossing the bay.

Unfortunately for me it was the regulatory office that had the opening. Shows you what a great place it is to work when you can move from one branch to the other without a lot of fanfare. When you have staff, particularly secretaries, working twenty-five or more years you know it’s a good place to work. One of my co-workers has been with the company forty-five years. Cori at my old office started when she was twenty and even at sixty-five she was still going strong. Not long ago she asked why would she retire when she had such a great job? I felt the same way, until four months ago. That’s when I ended up in here in this particular satellite office. That would be the one that handles regulatory work.

Here in the regulatory office we don’t see too many clients. Don’t get me wrong. We do see them, but they are engineers and accountant types who don’t much care if the furniture matches, just that there’s a chair to sit on. And given we do some public sector work, it’s not like we want the public to see us squandering their money, you know? And, it’s only a one bus ride from my home in Marin County.

But I digressed, didn’t I?