Lacie Logan is just another Delta raised beauty until her attempts at a movie career fail and leave her working as a professional escort in Las Vegas. She doesn’t like it, but what's a girl to do? Then, during an unexpected thunderstorm, she walks into a coffee shop and is suddenly back in April 1956. When she meets Elvis Presley, she’s sure she must be dreaming but when their chance encounter becomes a full-blown romance, she realizes that she has the chance to both win the King of Rock and Roll’s heart and change history. 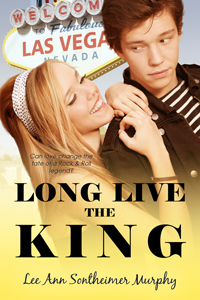 Behind her, the door opened with a rush and rain sprayed in, enough to make her jump forward. She tottered on her heels and almost fell over.

“Oh!” she cried just as a pair of strong hands caught her and put her upright.

“I am sorry, ma’am.” The voice sounded familiar, a deep voice touched with the richness of the South, dark and sweet as chocolate. “Are you all right?”

She was soaked, had only a few dollars in her purse, and was miles from the cheap motel she called home, but she tried to smile.

Lacie’s voice stuck in her throat like a bite of peanut butter sandwich as she turned, because the hands staying her fall belonged to Elvis Presley. A young Elvis. She looked into his familiar face, stared into his blue eyes, and gazed up at his combed-back light brown hair. There was no doubt—it was Elvis Presley.

Her body shook; she could not control it and she trembled, chills taking over. He was young, the King, alive. In person, he was far more handsome than any photograph or album shot portrayed. Those full lips looked as ripe and sweet as plump strawberries and his face, almost but not quite heart shaped, combined a sensual wickedness with an innocence that summoned up the familiar look of a boy from back home. He was taller than she was, by a fair bit, and dressed in simple jeans, a jacket, and a button-down cloth shirt. However, this could not be real; it was impossible. Elvis got old, grew fat, and died too young more than thirty years ago. Maybe she hit her head out in the nasty weather or maybe this was a dream. Gosh, she thought, with growing horror, what if she had died, been hit by a car or struck by lightning. Something was askew, somewhere, because what she saw had to be fantasy.

“Hey, now, take it easy,” Elvis said, putting one arm around her waist. “Everything is all right. Come on, sit down, I’ll buy you a cup of coffee.”

“Thank you,” she muttered, allowing the King of Rock ’N Roll to steer her to a booth where she slid in across from him. She was still shivering and, being a Southern gentleman to the core, he stripped off his jacket and put it around her shoulders.

“There,” he said, in the voice that broke the hearts of millions of women for at least four generations worldwide. “Would you like some coffee?”

“Yes, thank you,” Lacie managed to say. His coat smelled very masculine, like tobacco, cologne, and his personal musk. She liked it.