Lost and Found - An Autobiography About Discovering Family

Lost and Found, the autobiography of N.Y. Times best-selling author Micky Neilson, a 20 year-veteran of the World of Warcraft franchise, is The Glass Castle meets Of Dice and Men.

Lost and Found: An Autobiography of Discovering Family, is the harrowing and inspirational memoir of the successful contributor to World of Warcraft and N.Y. Times best-seller Micky Neilson, who was kidnapped by his schizophrenic father as a toddler, spending his earliest years on the run and his teenage years as a foster child. This autobiography chronicles Micky’s experience serving in the first Gulf War, the meteoric rise of Blizzard Entertainment and, most triumphantly, his reuniting with the family that was stolen from him as a child.

“No one who reads my fiction today or plays the video games I've contributed to knows that I was kidnapped at eight months old, that I grew up with a schizophrenic father, that I didn't attend school until 7th grade, or that I never knew my true identity until I was reunited with my family after 38 years,” said the author. “It's such an honor to finally be able to share my life story.” 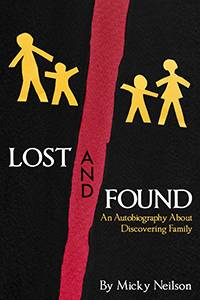 Lost and Found - An Autobiography About Discovering Family

We were in the middle of a sun-scorched desert, going hungry, drinking water meant for cows, and Dad was determined to take down the government, and take me along for the ride. I really didn’t think things could get much worse.

Remember that dirt road, where Dad built the newsstand for us to draw pictures for passersby? Well one day, a car pulled up to that stand. Dad went to the hill overlooking the road, and for some reason, at the sight of this person, Dad freaked. He became hostile. He got one of the rifles. I was freaking out at this point too, but that was just the beginning.

Dad handed me a gun as well.

He said that he was going to talk to the man out by the road. He told me that I was to go the top of the hill, lie down in the dirt, and point my gun at that man, and watch the two of them through my scope. He looked at me with that intensity I had come to know and respect and fear, and he said that if he gave me the signal—arms up, palms facing outward—I was to shoot that man in the head.

I said I didn’t want to, but Dad said it was “kill or be killed.” All I knew was that I didn’t want Dad to die, and so I went to the top of the hill as Dad went out to the road . . . and I lay down on my belly and put the man in my sights.