The trip of a lifetime is the much deserved reward for the men and women who have worked tirelessly to become the best for Maestro, but no one is more deserving of this reward than Stan Maynor, the young man who is adored by his maestro, and who Maestro has fine tuned to become the leader of his band, and perhaps much more. This adoration by Kevin Mathews, or Maestro, is yet unknown to Stan, who is somewhat intimidated by the masterful maestro. Stan is excited about this once in a lifetime vacation, but only because his plans include seeing his lover, a man who Stan believes is unknown to anyone, including Maestro. 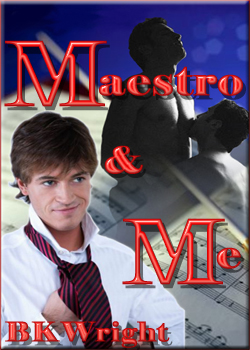 Stan lay on his bed and stared up at the ceiling. He jumped when his phone rang. “Stan, is it true? You’re going to be a star.” “Not hardly, Marshall. But now what are we going to do? We had our trip planned months ago.” “Yeah, I know. How about this? Tell Mr. Mathews that your family is going and that you would rather stay with them.” Stan thought about that. “That might work, Marshall.”

Stan continued to lie on his bed, thinking it all through. Maestro had been so good to him, and had treated him like a son for four years. Stan hated to lie to him. But he wouldn’t give up being with Marshall for anything.

The door to Maestro’s office was closed, though not all the way. Stan was just about to knock when he heard Mr. Mathews’ voice. It sounded as if he was on the phone with someone, and he sounded upset. “You know how hard I’ve worked for this. You don’t care about what I want. All you care about is yourself. Well, I’m sick of your demands, Harry.” This was a side of Maestro Mathews that Stan had never known. He sounded angry, but he sounded hurt, too. Who was Harry? “I’ve put my career on the line for you, Harry. You know as well as I do how hard it is out there for guys like us.” Guys like us? Stan wondered what that meant.

Kevin threw the covers back and sat on the edge of the bed, wearing only his underwear. Stan’s glance at his crotch did not go unnoticed. “You like what you see?” “What?” Kevin adjusted his erecting penis. He carefully outlined it between his thumb and forefinger. “You like what you see?” With one sudden and unexpected movement, Kevin got onto the bed with Stan and took the bottle of liquor from him. “You’re too young to drink. Better leave drinking to the big boys.” Kevin helped himself to a drink from Stan’s bottle, and then set the bottle down. Kevin was hard and Stan tried desperately not to look, but he wanted him. “Who is Marshall?” Stan’s eyes were wide. Should he lie? He had kept his secret for so long that he didn’t know what to do. Kevin refused to be put off. “Is he your lover?” “No,” Stan heard his words of betrayal loud and clear. “Who is he, Stan? He called a little while ago.” “What did he want?” Stan dared to ask. In his harsh whispered voice, Kevin continued. “He wanted you to know that he called.” “That’s all?” “That’s all, Stan. What is he to you?” Kevin was not going to let this go. “Does he fuck you?” “No. I haven’t….I mean….I have never.” Stan felt like such a child right now. “Does he want to fuck you?” Stan looked at him. “I don’t know,” he answered, honestly. Kevin leaned up and kissed Stan hard again, as if he were trying to devour him. He sucked Stan’s tongue into his mouth and then forced it back out. He leaned back again and studied Stan’s eyes. “Do you want to fuck him?” “I…I never really thought about it.” “Sure you did. Do you want to fuck him?”