Abigail claimed the land of North Vancouver as her own, sharing it only with a clan of vampires, the Jericho Coven, who accepted the werewolf into their territory without qualm. Within their numbers is one, Cyrus Jericho; a suave, brooding vampire who isn’t quite as he appeared. He declares Abigail for his own the moment they meet, despite the fact that another werewolf pack is in British Columbia 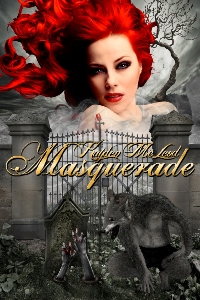 The man was a monster, nothing less.

His stained clothes provided enough evidence of that fact. The clothing wasn't of this time, but that of centuries past. He wore a parted shirt that bared his blood-coated chest. Abigail could see blue ties against his ashen flesh; they held the material of his shirt together. He also wore tight-fitting pants that flared over grimy, sodden boots.

This thing had made a real mess of its snack, something she would never do. Abigail had seen and done a great many things in her life, but this had never been among them.

Run, damn it, run! she screamed at herself. Make your feet work. Do you wish to end up like its last meal? Turn tail, and get the hell out of here!

The man began to speak in a language she ill understood or perhaps he did, in fact, speak English, but his growls garbled it past recognition. Eventually, though, the words became clearer to her.

"Abigail, so beautiful," he said calmly, not looking at her, but at whatever lay behind her in the distance.

She backed up until she collided with the nearest tombstone, stupidly pleased she could finally move of her own accord. She thought she would be safe now; surely now she would be able to escape.

"Mine." He stared pointedly at her, and she sneered in response.

"I belong to no one," Abigail snapped. As usual, her tongue got the better of her.

His eyes narrowed on her. "I beg to differ, moj ljub. I want you, and I always get what I want."

His hypnotic eyes enraptured her for a moment, causing her to look past the gruesome image he represented and see just the man.

Distraction could be a bitch, and in this case, that was a definite.

Dirt exploded underneath Abigail's feet, spraying around her knees. A bare-boned hand escaped the soil, and grabbed her ankle in a painful grip. Bony fingers bit into her flesh as a second arm revealed itself in a swirl of dirt.

“You will never escape me, Abby."