Touch of the Fire God (MF)

Scions of the Ankh 1

Dr. Rene Selkis leads a disciplined life dedicated to her profession. A phone call turns her world upside down, and she learns her childhood benefactor is dead. She is then summoned to Egypt to oversee his affairs.

The moment her feet hit Egyptian soil, she releases a spell and wakes the sleeping god, Ralabos.

Intoxicating and stimulating in every way, the sexy Ralabos offers Rene the world and an eternity of pleasure. But this mysterious being garners dark secrets from her past.

Secrets that can very well cost Rene her life.

Touch of the Fire God (MF)

Scions of the Ankh 1

4.5 Cherries: "Ms. Meilleur takes the reader through many twists and turns with her cleverly laid out adventure. I love the way this author takes the reader on a tremendous journey of confusion, conflict, deception, hot sensual love scenes and transformation. There is so much going on in this story, I definitely did not want to put the book down. Oh and a cold shower is in order with this one as well! Ms. Meilleur certainly knows her way around an erotic joining of great lovers. Every thread is tied up in a realistic colorful manner, and Ms. Meilleur actually leaves the reader with hopes of a new adventure at the end of the book. This was a wonderfully different read for me. Not my typical preference but I strongly recommend this book. I will look for the next one. Her characters are fully fleshed out and likeable, as well as the plot threading and the editing is just about perfection. I thoroughly enjoyed this read and you will too." -- Buttercup, Whipped Cream Reviews

"There is a wealth of material when one considers the gods of the ancients, and many tales to be told. There are also as many takes on any one story as there are writers, but for Toni Meilleur, the twist is erotic, sensual, the tales rich, and The Touch of the Fire God is no exception...Toni takes us deep into the love of Ralabos and Selkis, feeding it to us in snipets as Rene relives it in her dreams. She confounds us, charms us, infuriates us, and in the end she brings us all back to the beginning, and wanting more. The Touch of the Fire God is a book you will want to read over and over, and I have to tell you this, I am looking forward to the sequel, Caress of the Dark God, to see what is going to happen with Torian A. Nubis and Dr. Tessa Michaels. If you want my opinion, you should go to Siren's Bookstore and pick up a copy of The Touch of the Fire God today!" -- Rose, Romance at Heart

4 STARS: "TOUCH OF THE FIRE GOD is a great paranormal romance with excellent mythology. The plot is tightly crafted and the leads perfect for each other. Rene leaves her job as a doctor when her benefactor dies in Egypt. When she arrives in this beautiful arid land, she meets Ralabos, an exotic man who fuels her erotic dreams. Ralabos is a god of extraordinary powers and believes Rene is his beloved wife reincarnated. But Ralabos' enemy, Seth, is searching Rene to kill her like in her last life. Now Ralabos must keep Rene safe and bring her two souls together in hopes she will love him as he does her. Rene and Ralabos are great leads. I'm not normally a fan of the star-crossed lovers romance but this one was unique and very well written. I love that Ralabos was so committed to Rene but had to balance his desire to be her mate again with her need to acclimate to his strange tales. Rene is the quintessential modern, independent woman but I liked how she called herself out on her bad behavior. The sexual chemistry was more developed than the emotional connection but given the novella format, that worked for me. I love the mythology of the Egyptian gods and who they really are. I can't ruin that part but I liked it a lot. I also liked the secondary characters of two mated gods. They were lovely counterpoints to Ralabos and Rene. I'd love a short story on how they became a couple. Anubis, the Dark God, appears here and has his own book, Curse of the Dark God, and it's stellar too. TOUCH OF THE FIRE GOD is a wonderful paranormal romance. Fans should read this and the next in the series. The world created is so good that I wish there weren't only two books in this delightful series." -- J9, The Romance Reviews

More From Scions of the Ankh 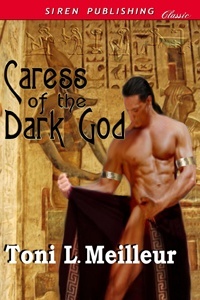 Jonathan shuffled all of his papers back into his briefcase, and fifteen minutes later the plane landed smoothly in Cairo.

Rene finally felt something of her old self. Dr. Selkis, woman in control, she chanted to herself.

Jonathan went before her, of course. His manners were impeccable. He wanted to be able to help her down and probably protect her from assassination, she thought wryly. She still hadn’t gotten that safety comment from her mind.

As she descended the stairs, something thick seemed to permeate the air. Not smoke or smog or anything that could be seen with the human eye, yet it felt as if something was waiting in the very air itself.

Rene shook herself mentally. She had to get hold of herself. Ever since she had started having dreams of Ralabos, everything seemed to have a shadow, a purpose, or a double meaning.

Jonathan reached the concourse first, then reached up to guide her down.

The moment her black-heeled feet hit the ground, a deafening crack rent the air. Rene could only liken it to a sonic boom. The ground roiled under her feet; she thought she was smack in the middle of an earthquake. In defense, she covered her ears, but it was too late. The sound happened so quickly, she wondered if she had heard it at all. Then the ground rested as if suddenly commanded to do so.

“Did you hear that? Feel that?” she asked Jonathan, grabbing his arm and digging her nails into his suit jacket.

“To what do you refer?” he asked, neutrally looking down at the beautiful, but clearly disturbed woman. A moment later, Rene abruptly released his arm.

“It was nothing. I’m just a little more tired than usual.”

Jonathan smiled at the woman and led her to the waiting car. Most certainly he had heard and felt the disturbance. It was meant to wake the dead or near-dead—he mused to himself.

She had heard the spell working, which could only mean one thing. He had finally found her, the one he had been waiting and searching for. She had finally come home.

The old one would be awake now and most anxious to see her. Finally, Jonathan felt as if he could repay the debt he owed his old friend.

The fissure groaned and protested, but yielded to the greater power. Ralabos immediately stopped the Earth’s unrest, lest he cause damage and death to the natives. He opened his eyes, taking in the last scenery he had seen before his deep slumber. Little had changed in this land. It still appeared remote and barren.

As he stepped out of the huge crevice, dirt and earthen debris cascaded onto his body. Within seconds, however, he was free and clean of it. She had come; now he would go to her.

His storm gray eyes that could see both this world and the realm of sorcery and magick detected a thick ribbon of color.

Ralabos smiled. His friend had not failed him. It was a spell to lead him where he was awaited. Immediately another spell activated. Information tumbled into his brain at lightning speed. Basic things he needed to know about this new world whirled around in his head—laws, customs, even a new basic language. Thoth had been most thorough and helpful.

His body began to thin until it became a light, foggy vapor, which reshaped itself into the form of a large hawk.

He took to the air, his powerful wings beating slowly, yet with such power that they propelled him forward at an alarming speed.

He disengaged himself from her grip and dropped before her gracefully. “Remove this clothing,” he demanded, eyeing her pants as the enemy. She hesitated, and then slowly and shyly she pulled them down until they rested at her knees.

She would not think about what she was doing right now. Maybe later. Maybe. She knew her underwear was soaked. She could smell her own scent now, and he, too, took a deep breath, filling his lungs with it.

She placed her hands on his shoulders, trying to keep her balance, for her legs had just turned into an insubstantial, gelatinous mass.

His tongue was beyond talented—gifted, it would seem. It speared its way through her folds and licked the cream that he had caused to flow.

She gyrated against his face, pulling it closer. Then he began to hum, so low in his throat that it caused vibrations on her clit, vibrations that were deliriously sensual.

Then he added fingers to the mix. Hot, thick fingers prodded her to open her stance, and she greedily complied.

He rubbed her and heat seemed to emanate from his hands. He inserted one finger, then another, in rhythmic strokes, never breaching her hymen. Warmth coursed through her as he tuned her body into an Earth-shattering orgasm.

“Ralabos!” she screamed hoarsely, the waves breaking over her, drowning her. He placed his mouth against her clitoris and sucked lightly, wrapping his hands around her ass and pulling her close as she continued to come.

After, she slid down onto his lap like the puddle of nothing useful that she was. Parts of her still clenched and unclenched as small aftershocks echoed through her body.

The night air blew the scent of jasmine all around them. Their breathing was labored, but slowly returned to normal as they sat holding one another in total silence.

Until, that is, she became coherent enough to notice his still-hardened cock, which was nestled against her ass. “Let me.”

“No, zenj’a.” He stopped her. “This will be as far as we go this night. I cannot guarantee control if you were to take me in your mouth.”

“I will be fine,” he assured her. He had taken her far enough this night.

“No, you do not get to control everything.” She wrapped her hand around his cock and pumped slowly.

“Zenj’a,” he moaned as her initially-shy fingers became bolder. She cupped him and stroked him simultaneously. His cock was so hot and hard, unnaturally so, but she loved it and briefly wondered how it would feel to have it inside of her. She pumped faster, imagining him driving into her.

Ralabos picked up her thoughts and was lost in her fantasy. She had insisted. She was just as attentive a lover as he remembered; always she liked to see him come.

“I want to see you come,” she said softly, having never experienced this at any time of her life.

At the time, Ralabos could only groan a reply.

Sometime later, however, he managed to rasp out to her, “I’m coming, zenj’a!”