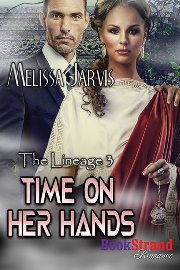 A mild-mannered Public Relations executive by day, and action-packed writer by night, Melissa Jarvis lives in celebrity-friendly Southern California with her husband and son.  For over 14 years, she has worked in the public relations industry, doing press releases, bios, newsletters, media campaigns and more for clients ranging from the Playboy Jazz Festival to the Los Angeles Mission to JVS.  And she's survived with most of her mind intact!  An active member of RWA, she writes both paranormal romance and urban fantasy, as well as spicy paranormal.  She is currently working on the sequel to Past Her Time, featuring agent Banderan's story.

Q: What kind of research do you do for your books?

A: Aside from the traditional types of research (i.e. books, internet, experts) I like to actually see what I'm writing about.  While time travel does not actually exist yet, pity, I did visit France and many of the locations featured in Past Her Time, including the Conciergerie Prison where Marie Antoinette was held.  In a classic brain lapse moment, I also asked at the French Consulate where the Bastille prison was, since I wanted to check it out.  (Note: it was the fall of the Bastille on July 14, 1789 that started the French Revolution.) I also collect antiquarian books, and the time navigation article that Gabriel reads in Past Her Time that unnerves Alex really exists, in a magazine called Gentleman's Quarterly.  I even have the issue it appears in, from 1793!

Q: Do you base your characters on real-life people?

A: I do use certain personality quirks and expressions from my family and friends when creating my characters, and occasionally steal names.  Anyone is fair game; meaning watch out if you're friends with me, you might just see that trademark eyebrow rise in one of my characters!  (Hint: He's male.)  And Alex's hair is the same as mine.  But I can't kick butt.

Q: What inspired you to create the Lineage?

A: I come from a science fiction background, and grew up reading Robert A. Heinlein and Anne McCaffrey.  As a big fan of romance novels, I wanted to see that same kind of world building, especially with regards to time travel.  Most of the books I had read had a character picking up an antique cameo and whoops, she's back in 1886.  Never mind that her actions with that handsome frontier cowboy might cause another Civil War.  There needed to be rules and regulations, and consequences for interfering.  There's a great short story that many people have probably heard of, it essentially proposed the Butterfly Effect.  Step on a butterfly in one time period, and when you return, everything has gone to hell.  There was even a movie with Ashton Kutcher.

Q: When did you first know you wanted to become a writer?

A: Seventh grade.  My friend and I would spend all of our time working on a “spin-off” of Anne McCaffrey's Dragonriders of Pern series.  I would like to offer my sincere apologies to her.  Later, I minored in creative writing in college, although I don't think I fit their concept of a serious writer; I wasn't tortured or depressed and I didn't wear enough black.  My major was Mass Communications, since my parents thought I needed an actual job while writing the Great American Novel.

Q: How do you find time to write?

A: I don't know.  I think that's why I focused on time-travel.  If I could unlock the secrets of the space-time continuum, then maybe I'd be able to find more time to write.  That would be in between managing a soon-to-be kindergartener, a house, a husband, a day job and the hoped for legions of fans who will love this book and want me to finish the second and third ones.  Until then, I write mostly at night, after the little nut has gone to bed.  It can interfere with my love scenes though.

Past Her Time (MF)
In Bookshelf
In Cart

In His Own Time (MF)
In Bookshelf
In Cart