Fall of the Lanarian Empire 2

After being appointed Commander of Centralis, Jarl Loriaska sets out on a mission to visit every corner of the troubled Empire. He learns of new potential allies in the fight to come and continually hears about a prophesied Destroyer who will either save the troubled southlands or plunge them into complete and utter destruction. Upon returning to Centralis, Jarl and his wife, Ann’le’anya, make several startling discoveries. Forced to flee for her life and to brave the dark Underwilds to rescue her love, Anna and Jarl soon find themselves forced to confront a friend who has become their most ancient enemy… 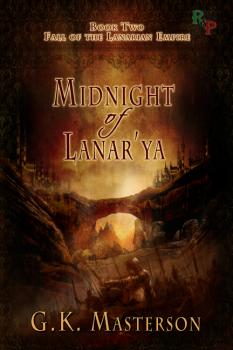 Fall of the Lanarian Empire 2

More From Fall of the Lanarian Empire 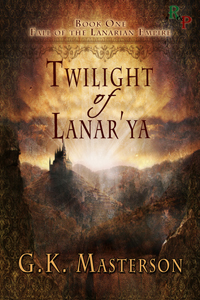 The prisoner woke up to his own screams. His wrecked and ruined throat ached as he drew in shuddering breaths, trying to calm his heart. Hot tears flowed down his face, leaving trails of mud in their wake. His matted beard was soaked with his weeping. Turning his head to the side, he wiped his face on his rough, dirt-caked sleeve. He was surprised he had any tears left. He was surprised he was sane enough to remember he had cause to weep beyond being in this dungeon waiting for his death to come. And it would come soon enough. His days were well and truly numbered. Death would be a sweet release from the bitter torment his life had become since his capture.
“Wanderer forgive me,” he groaned softly, tears running anew from the corners of his eyes. “I failed her. I failed her and she’s gone. Forgive me.”
The prisoner heard no benediction. He expected none. His weakness had led to this end and it seemed that even the face of his god had turned from him, leaving him in the darkness. Only insanity held any hope of holding the anguish at bay and even that was merely temporary. Reality always intruded — usually at the worst possible moment. For now, though, the prisoner thought he was safe enough to indulge in a little lapse of sanity.
He’d forgotten how his madness had begun. Lately it seemed as if he had always been barely sane. The days of his former life were distant and half-forgotten, melting away like the fading shadows of a dream melt upon awakening. She was the only thing he could remember from his previous life and the memory of her was an especial torment.
The prisoner closed his eyes and let his mind drift. A few surface thoughts tried to wrest his attention away from the drifting, but he had learned to ignore them. Soon, his mind was silent and dark, almost as if he were sleeping. That was when the madness grabbed him and dragged his mind through a place of impossible shadow and into a place of impossible light. Here, in a realm where no shadow existed, the prisoner could let himself relax for a short time. Nothing could harm him when he was here as long as he did not allow his mind to be wrested back to reality. He knew that in time, the needs of his body would intrude and force him back. He also knew that his captors, if they had returned to torment him and break him further, were more than capable of dragging his mind back to his body. But, for now, the prisoner could rest and relax, far above and beyond his cell.
Perhaps, one day, if the Wanderer forgave him, he would be allowed to remain forever in this peaceful realm of light. The prisoner clung to that hope — it was all he had left after seeing what they had done to her — seeing what he had failed to protect her from.
“Forgive me, my love,” he whispered hoarsely, feeling tears run down his cheeks. “Forgive my weakness.”
As the prisoner wept, his mind and body crying out for a forgiveness he never believed he would receive, his mind drifted, searching and praying to find one he no longer believed he could see or name. If only some hint of her remained, some faint trace of her fragrance, he could find the strength to join her. But no matter how he searched this realm for his love, he found nothing but emptiness and the lonely echo of a love that had died.
The prisoner was about to give up, about to just let his mind drift in the realm he had come to think of as a false paradise, when an awareness brushed against him. His senses were honed, near razor sharp, from months of mad wandering. Focusing on the sensation, he tried to trace it, to track it back. Until now, he had never felt anything but his own emptiness in this calm asylum. But if something or someone else was there, perhaps they could help him. Perhaps he was not beyond redemption. Chasing after it, he could feel his body tensing, pouring all of the strength he had once possessed into the hunt for this elusive presence. Desperation poured into the prisoner. He had been alone with only his tormentors for company for so long. If there was someone else out there…
“No, no!” he cried as he felt his mind being dragged back to reality. He fell through the realm of light, slammed into the realm of shadow, and then was pulled the rest of the way back to his taut and weary body. “Please, no.” He wept pathetically as his eyes opened to see one of his jailers standing over him.
“Simion wants you,” the creature hissed through a mouth never meant for normal speech.
“Please, I’ll do anything,” the prisoner moaned.
“I expect you will at that,” the creature laughed as its clawed hands wrapped around the prisoner’s shoulders. “Simion’s good at making your kind do as he wants. You there,” the creature hissed to one of its brothers, “grab his legs and help me carry him. The Master doesn’t want him too bruised and battered. At least not yet,” he chuckled.
Limp, tired, and too broken to put up more than a token resistance, the prisoner let them drag him to another session of torture. However, deep in the back of his mind, he remembered the elusive presence and felt the beginnings of hope stirring amidst his despair.

Ann’le’anya paced restlessly up and down the tunnel. She could feel her guards’ eyes boring into her as they stared at her. None of them were comfortable with looking at her face or her protruding belly. Only their guides could look at her with anything approaching normalcy and even their gazes were tinged with awe. Her breath hissed between clenched teeth in annoyance. Mother of Destruction, the woman prophesied to give birth to the Destroyer, the youngest child and only daughter of the High Elven king of Syl’aria, archmage, daughter of battle and blood — she had more titles than she knew what to do with. The only one that mattered to her was “wife of Garal’anthin’aris sel Loriaska, Commander of Centralis.”
“How much longer must we leave him to suffer?” she growled angrily as she placed a hand on her rounded belly. “You could have rescued him months ago.”
“We must wait until the proper time,” one of her companions said calmly. “The world depends on it.”
Ann’le’anya grunted irritably. She’d heard that response so often she was ready to tear her hair out and use it to strangle the Demlinrolk who led their guides. For all that her family had supposedly disowned her; the elven princess was being escorted by enough guards and guides to fill a large squadron.
“If we wait much longer, they’ll kill him,” she argued, knowing it was useless.
“If we move too early, they’ll capture you and your child,” her brother muttered from the shadows. “And I have not come all this way to return to our father empty-handed.”
Ann’le’anya muttered an elven curse beneath her breath and resumed her pacing. Her back ached and her ankles were beginning to swell. She hadn’t had a good night’s sleep in several months — not since the day of Jarl’s funeral. She longed to be with him again, to feel his arms around her. That longing, coupled with her worry and her fear, kept sleep at bay.
She shivered with fright when she felt a hand touch her back. Turning her head to glance over her shoulder, she could see the Demlinrolk they called “the Watcher” standing behind her, offering his silent comfort. Sighing, she turned and leaned her head into his chest and wrapped her arms around his waist. He stroked her hair tenderly, like her father had when she was a child.
“He will be well, in time, young one,” the Watcher whispered softly, pitching his voice so that only she could hear it. “You must rest. You remind me of my granddaughter when she was with child.”
“Your granddaughter?” she repeated. “I never asked, but what is the lifespan of a Demlinrolk?”
“Around six hundred years,” he replied. “I’m in my fourth century. I would have thought your people would be more patient than mine considering that you live so much longer.”
“Only those of us who are of the purest elven descent live the full span,” she muttered, pushing away from the Watcher and moving to settle down on her sleeping mat. “I still can’t believe that we were so blind. So terribly, stupidly blind. I should have seen this coming. We all should have,” she growled angrily. “And now, it’s too late to stop it.”
“It was always too late to stop it,” the Watcher said as he settled down next to the elven woman. He motioned for her to lie down and then tucked the blankets around her. “Your people drove out the prophets who could have warned you, could have prepared you for this. I know, I know,” he temporized when it seemed that she might argue, “but we’ve known this day was coming since we were exiled. That’s why we’re able to be patient. We know what comes next and why it must happen as it is happening.”
“That might be the case,” Anna sighed, “but it doesn’t make living it any easier to bear.”

Twilight Of Lanar'ya
G.K. Masterson
In Shelf
$4.99
Tweets by
sirenbookstrand