Professional clarinet player Sean Kallis is at a crossroads in his life. Having moved to the sleepy California country town of Ono—nicknamed Oh, No— to take care of his ailing mother, her passing has left him adrift. Christmas is coming, but he doesn’t feel the spirit of the holiday season. Not one bit. Tormented by his failed organic vegetable garden and broken farm machinery, he ponders his uncertain future. He receives an unexpected invitation to travel to Corfu, Greece, to play clarinet for the island’s quirky Christmas band. He’d be dangerously close to Loukas Stathis, the man who had broken his heart. Can he risk it?

Loukas Stathis is Greece’s most celebrated bouzouki player. As talented as he is with musical instruments, he’s lousy at love. He’s kept secrets, foolishly kept them, and lost the man he loves more than life. With Christmas around the corner, can he make a change that can make them both happy? After all, as the lyrics in Mistletoe and Wine, his favorite Christmas carol state, it’s a time for living, and, for trusting.

But most of all, Christmas is a time for believing. 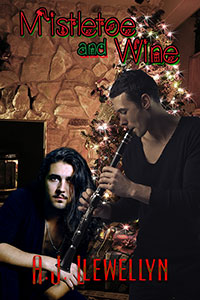 Loukas Stathis took small steps from his cousin Connie’s house, to the AB Market on Kato Korakiana. The weather was warm, the sun the color of pale egg yolk. It was a relief after the bad storms that had raged for days from the Greek mainland to the southern shores of the island of Corfu.

From somewhere, a radio played Christmas music, making Loukas feel buoyant. He hadn’t walked so much in months.

A swallow dipped in front of him, making him smile. It was December twelfth. Didn’t the little fellow know he should have left the island to follow the sun in November? The storekeeper greeted him.

“Kalimera.” Loukas smiled at him. The swallow circled the ceiling then flew out the door again. Oh, how cute. He was making sure I got here okay. Loukas had a small shopping list, but he was determined to fill it for Connie before the annual festival began.

Today was the day every store would close, and the celebrations began for Saint Spyridon, the man who’d once defended the island from the plague. After today, the island of Corfu would ready itself for Christmas. It was usually Loukas’s favorite time of the year.

He took pleasure in the detail of selecting the things he wanted. He took nothing for granted anymore. For months, he’d longed for a taste of Stilton cheese, and AB carried the best. He ordered a hefty chunk, then bought tomatoes, Fairy soap, hand cream, and eyed the hair color, which was on special. There was no use dyeing his hair. He had a ton of gray through it thanks to his illness.

I’ll live through it. I’ve lived through worse.

The store owner prepared a cut of meat for another customer and eyed Loukas with frustration. Then he glanced at the clock again.

I know, I know. You have to close soon. Loukas hovered by a bag of treats, also on special. He almost laughed when he realized they weren’t chocolates, but dog treats. His eyesight had become atrocious. I really should wear my glasses. The doctors told him it might improve over time. Might. He sighed and picked up a container of kalamata olives, the last item on Connie’s list.

Outside, people were shouting and laughing. The church bells of Saint Spyridon rang, filling him with a sense of peace. He loved any sound that had a chime to it. Music was his life. His salvation. He added a bag of chocolate cookies to the pile and paid for everything. The storekeeper smiled, and Loukas worked hard to hide his disappointment as he slid the loose change into his back pocket.

He doesn’t remember me. Have I changed that much?

Loukas put everything into the string bag Connie had given him and left the store. He headed toward the church, passing families dressed in their Sunday best as they raced for the coveted few seats inside the church. He loved being back here and smiled at the many signs, all written in both Greek and English.

Fresh bay leaves lined the streets, filling the air with their pungent smell as people stepped on them. Loukas passed under lines of lemon-scented washing stretching from balcony to balcony. The only stores open now were the tiny tourist ones near the church. They sold T-shirts, religious icons, and bottles of the island’s kumquat liqueur. A few donut stands had popped up as well, but he ducked past these and glanced up at the church’s gold frescoes painted over two hundred years ago. He slipped inside the church, not caring that it was standing room only. The aroma that had punctuated important occasions since he was a child filled his chest with hope. Frankincense and honey from handmade beeswax candle almost made him weep with nostalgia. He bought a thick candle and lit it, offering prayers for his own good health and for Sean, too.

I hope he is well. Please take care of him. Loukas blinked back a surge of emotion and placed the candle with all the others, then crossed himself three times. He joined the line and kissed the blessed saint’s feet and as he always did, marveled at how well preserved the great man’s body was. Loukas squeezed himself inside the crowded space and leaned against the wall.

The effort of walking, then hurrying, had cost him, but he shut his mind to his own discomfort and thought about the tortures the fourth-century Saint Spyridon had endured. Loukas couldn’t help thinking of his persecutions under pagan rule. Arrested and imprisoned, he was beaten so badly he lost the sight in his left eye. At least I can wear glasses. Even if I do refuse to wear them. Loukas caught glimpses of the statues lining the church, pleased to see everything beautifully decorated with flowers and springs of basil, and with a nod to Christmas, holly.

The priest sang, and the congregation joined in. Loukas imagined what it would be like having Sean here for the holidays. The idea had come to him weeks ago, but he’d been careful to plan it in secret.

Young altar boys carried the sheets of koliva, funeral cakes, outside the church. Maybe it was morbid, but these wheat cakes were the tastiest things ever to Loukas. As the service concluded, he followed the crowd outside and stumbled, almost falling when some children plowed into him. Their father steadied Loukas’s arm.

Loukas smiled and shook his head. In that split second, the man’s eyes filled with surprise recognition, then pleasure.

“Loukas?” he asked, pumping Loukas’s hand when Loukas nodded, as though they were old friends, which they were not.

“Love your music,” the man said. It was nice to know some people hadn’t forgotten him. “What happened to you?”

A Boyfriend for the Weekend
Caitlin Ricci
In Shelf
$1.99