There’s a killer in Shadylake.

A murderer lives among the citizens in this small California mountain community.

But no one noticed that one of them has an evil side—a black shadow.

Even after the grisly 1996 triple homicides at a local masquerade party, the killer was presumed to be an outsider. No one wanted to admit that a murderer lived in their idyllic town.

Four years later, a stranger arrives in Shadylake to rent the same house where the murders occurred—Hartley House. Alone, it was an unremarkable event but for the fact that Eve Collins bears a striking resemblance to one of the murder victims.

She has no idea that the house has secret entrances.

But the killer does.

NOTE: Previously published as Too Many Secrets. 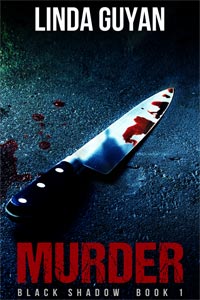 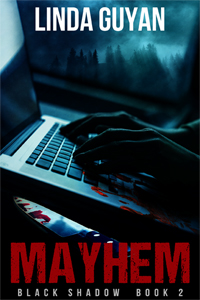 “I imagine you’re writing about the murders. I suppose that would be interesting to someone like you. So, do you have an ending for your story? Does the heroine die?”

Eve’s pulse quickened. She was not the type to be easily scared, but these words terrified her more than she wanted to admit. I know damn well she’s not talking about my story. Could this crazy woman be threatening me? She leaned back, a vain attempt to put some distance between her and this weird woman and her mocking attitude. Alice Crain is the strangest person I’ve ever met. Eve pulled herself together, took a deep breath, and did her best to sound authoritative. “No, the heroine doesn’t die.”

Alice looked at her watch and stood up, suddenly ready to leave. “Well, it’s late and I really have to be going.” She walked toward the staircase with Eve following carefully. “You really should see a doctor, you know. You could have a concussion.” Alice opened the door.

“I’ll be fine. Thank you for your concern.”

“If you say so. Goodnight,” Alice said. She took a step outside, then stopped and turned around. “You really should be more careful.” Alice smiled widely and walked away.

Eve watched as Alice got in her Jeep and drove away. Then she shut, locked, and bolted the door. Relieved the awful woman was gone, she leaned against the door and let out a heavy sigh. “What a bitch!”

Alice’s comments were still fresh in her mind as she went back downstairs to her bedroom. She mulled over each one, trying to make sense of them—they kept spinning through her head like a cog in some giant machine.

“What you don’t know could kill you. Do you have an ending for your story? Does the heroine die?” Eve mimicked, spitting the words out like sour milk. “That woman is thoroughly weird. I’ll bet she knows more than she’s saying.” Speaking her thoughts aloud seemed to make them real, to justify her intuition. She laughed aloud. “It wouldn’t surprise me if psycho Alice is the killer.” Eve turned off the light, then climbed into bed, pulled the covers up to her chin, and rolled over into her favorite sleeping position, avoiding her right side.

“Night, Cleo,” she said to her cat, who was once again asleep at the foot of her bed. Within minutes, exhausted from her strange day, she was sound asleep.

Eve slept peacefully while someone roamed freely through the house.

Wearing the usual all black apparel, the intruder quietly entered through the trapdoor and moved stealthily into the hallway. A peek into Eve’s bedroom to be sure she was asleep earned a hiss from Cleo, but the cat didn’t get up. The intruder ignored the cat and continued upstairs to the kitchen. There was nothing of interest in the refrigerator, but a box of chocolate chip cookies on the countertop provided refreshment and left crumbs on the floor. More crumbs fell on the table as the intruder focused on the laptop and began reading Eve’s story with interest.

A noise from downstairs warned that Eve was coming upstairs. The intruder hid in the broom closet, watching her through a crack in the door.

Eve shuffled into the kitchen, flipped on the light switch, got a glass of water, and swallowed some aspirin. Taking the glass with her, she reached for the light but stopped as something caught her attention.

“I’m sure I closed my computer,” Eve mumbled as she walked to the dining room. She closed her laptop before returning to the kitchen, then turned off the light and made her way back downstairs.

Stepping quietly out of the broom closet, the intruder returned to the living room and got comfortable at the table to continue reading. After, the intruder moved the woman’s car keys, then frowned.

Why is Janine writing about her own murder?