Interracial entertainment industry it couple Sasha Williams and Drake Lancaster are still going strong. Her impeccable publicist skills have kept him on the A-list, helping Drake land the lead role in a major Valentine’s Day movie. When filming wraps, the couple plan on heading to Cabo San Lucas, inviting both their families along to meet for the first time.

But plans go astray when Drake reverts back to his bad boy ways during filming and gets into a huge altercation with the director. He’s booted from the movie and replaced by Mitch Morrison, a hot young African-American actor who’s recently taken Hollywood by storm.

While Drake struggles to repair his image, Mitch hires Sasha to help manage his burgeoning career. The move infuriates Drake, but Sasha insists it’s a great business opportunity. She doesn’t realize Drake’s threatened by Mitch’s good looks and charismatic personality and is worried the pair will bond over their African-American heritage.

The stress of it all puts a strain on the couple’s relationship, especially when Mitch admits to Sasha that he’s developed feelings for her and she realizes the sentiments may be mutual. With the pressures of Sasha and Drake’s rocky union continuing to mount, the anticipation of their families meeting, and Sasha’s elusive affections towards Mitch, the couple can’t help but wonder whether their once booming relationship is about to crash. In the end, they must figure out whether their love is strong enough to withstand these challenges and carry them through this Valentine’s Day. 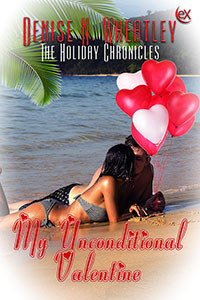 More From The Holiday Chronicles 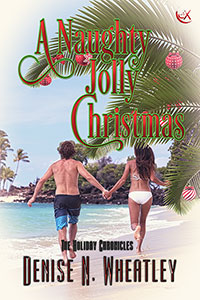 My Unconditional Valentine
Denise N. Wheatley
In Shelf
$3.99
All Books In Cart
All Books In Bookshelf
Excerpt

Sasha sighed deeply and rolled over, smiling happily while eyeing the palm trees swaying outside her bedroom window. She giggled at the touch of Drake’s hand playfully pinching her ass.

“Round three?” he suggested, cuddling up next to her while nuzzling her ear.

“Babe, you’re gonna wear me out,” Sasha insisted, glancing at her phone. “And you’re going to make me late.”

“I know, I know. I just can’t get enough of you, gorgeous.” Drake planted a soft kiss on Sasha’s lips and hopped up, then threw on his jeans. “I need to get moving, too. I don’t want to be late for this audition that I absolutely should not have to go on…”

Sasha rolled her eyes and climbed out of bed, running her hand over Drake’s rippling abs on the way to the bathroom. “The sarcasm in your tone is so strong that I can actually smell it. You already know why you have to audition for this movie.”

“No, I don’t. All I know is that my last three films killed it at the box office. And I just hit almost ten million followers on Instagram. Not to mention the kick-ass appearances I made on all the late-night talk shows last month. Or—”

“Okay, okay, I get it.” Sasha laughed, plugging in her flatiron, then turning on the shower. “You’re the hottest thing in the streets. But you’re auditioning for Gary Rosen, hun. The Gary Rosen. He’s one of the most legendary directors in the business. And he doesn’t forget things easily.”

Drake sauntered into the bathroom, his taut biceps bulging through his fitted white tee. Sasha resisted the urge to pull him into the shower and take him up on that offer of a round three.

“You don’t think he’s holding my days of being a bad boy against me, do you? I mean, I’ve completely turned my life around. I’ve stayed out of trouble, worked hard, and proven myself with every role I’ve earned. Seriously, what more do I need to do?”

“Knock your audition out the park today,” Sasha replied, stepping into the shower. “That’s what you need to do. Because unfortunately, while you and plenty of other people have forgotten about your checkered past, Gary hasn’t. When I called and practically begged him to consider you for this part, he brought up that altercation you had with your crazed group of fans at the Hollywood Hills Resort.”

“But that shit happened forever ago,” Drake exclaimed, throwing his hands in the air. “Dude, get over it.”

Sasha closed her eyes and let the warm water hit the back of her neck, choosing her words wisely before speaking up. “Baby, I know this is frustrating, because you’ve definitely reached a point in your career where you shouldn’t have to audition for roles. However, you’re going out for the lead in what’s sure to be a huge box-office hit, and you’ll be part of a star-studded ensemble cast.”

“I doubt it, because romantic comedies usually don’t garner awards of that stature. People’s Choice? Maybe. But you never know, this part could lead to a role that will win you an Oscar. In the meantime, enjoy the great experience, a big opening weekend close to Valentine’s Day, and the huge paycheck that comes along with it.”

“Yeah, I guess all that does sound good,” Drake responded, his eyes widening as she stepped out of the shower naked. “I don’t like the fact that this movie is going to be filming all the way in New York, though. How can I be away from my girl for that long?”

“The weeks of filming will fly by, and you’ll be home before you know it. While you’re gone, I can finally start planning our Valentine’s Day vacation. Are we sure we still want to invite our parents so they can meet? Or did we make that decision after an epic lovemaking session, when we were still high off of endorphins and adrenaline?”

Drake leaned against the wall and let out a loud belly laugh, then stared at Sasha intently as she began applying her makeup. “We were both fully in our right minds when we made the decision to invite our parents to Cabo. This thing between us? This is real, Sasha. I’m not going anywhere. So our parents need to get acquainted as soon as possible, because as far as I’m concerned, we’re in it for the long haul.”

“Aw, you’re the sweetest, babe. And I couldn’t agree more. I’ll start looking at resorts and sending out emails to everyone with some potential dates. In the meantime, you’d better get going. I don’t want you to be late, and I’m meeting with my boss, Nick, as soon as I get to the office to give him an update on my press event schedule.”

“Are we still on for dinner tonight?”

“Of course. Now go break a leg and prove to Gary Rosen that your days of being a naughty rascal are over.”