Naughty Nine explores the passions of myths ranging from the fair mermaid to the cry of the lone werewolf. Dare to enter the darkness, to pass through into the realms of fairy. Seek out forbidden passion in the arms of an unexpected lover. Ecstasy lurks in the jungles, among the tides and in the shadows where you least expect it. A collection of nine steamy, short, erotica tales of unlikely love and passion await you. 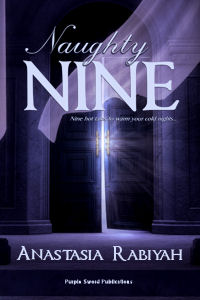 Audrey sipped at the wine and stared out at the stars above the ocean. The water reflected the twinkling lights in its murky darkness. Waves lapped at the beach, not twenty feet away, and she remembered why she fell in love with Greece the first time she’d visited this little restaurant. She’d come for her brother’s wedding and they all ended up in this tiny village, staying in a quaint, family-run hotel. She set down the glass and twisted a lock of her dark blonde hair, examining the strands as a memory washed over her. It wasn’t the pristine beauty, the ethnic charm or even the incredible food. “I fell in love with Luciano,” she told the sea.

She closed her eyes and breathed deep, wishing the spicy scent of his skin filled her senses at that moment. It had taken a full year to come back here, a year to gather the courage to search for him. Maybe I waited too long. It’s foolish to think he’d be here.

Bouzouki music reverberated in the air. Audrey opened her eyes, feeling silly and romantic all at once. She downed the last of her wine and stood. Dropping Euros on the table to pay for her meal, she resigned herself to giving up. It was her first night back in this place of dreams, and now that she’d come all this way, she realized it was a pipe dream at best.

Straightening her green skirt, she started through the small crowd of dancers, whose bodies pressed together for a close moment under the night sky. Passion sizzled in the air. She strode past the bar then halted.

A man stood in the shadows, tall and mysterious. Black hair framed his face, a face she could never forget. She blinked to be sure. He took a step toward her, his eyes reflecting the same wonder that flooded her heart.

“American?” he asked, his full lips curling with a knowing smile. This was how it began, only now, he knew the answer.

“Still.” She wanted to run to him, to throw her arms around his shoulders and cling there, lost, found and fulfilled all at once. Instead, she remained frozen.

“It’s been a long time, Audrey. Care to dance?” He moved with the grace only a predator possesses. Muscles rippled and tensed beneath the thin cotton shirt he wore. Blue jeans hugged his hips. He appeared exactly as she remembered him, her gaze rising to his face to be certain. The torchlight danced in his deep brown eyes. Long ago, she’d lost herself there and never wanted to return.

“I will, if you agree to one thing.” She swallowed her desire and promised herself not to give in too much. Bad enough he really showed up, that she’d finally found the one man that stirred fire in her body. She’d spent so much time glancing over her shoulder or staring at men that sparked a memory, hoping it would be him. It never was, until now.

Luciano took her hands, his fingers warmer than she remembered. He leaned in to deliver a kiss to her cheek. His lips seared her skin. He pulled back only to move to the other side, searing the opposite cheek in the same way. How she wanted those lips on hers. “Name it.”

“Don’t let me wake up alone in the morning.” She squeezed his large hands, hoping he’d agree. It was a small thing to ask after what had happened last time.