Peace on the enchanted world of Decagon is about to end. Radiance, its daylight realm, is on the brink of invasion from the night dwellers of Moonshade. And only human-born Venus Myles, a dance teacher unaware of her divine lineage, can stop them.

Radiance sends Bolt to Earth to enlighten Venus, and their passionate connection sizzles. But before Bolt tells Venus the full extent of his world’s dilemma, or the unimaginable consequences if she refuses to help, he is unexpectedly withdrawn.

Reeling from the shock of Bolt’s sudden disappearance, Venus travels to Radiance in search of him…and finds evil at its most depraved lying in wait.

Sexy and enthralling, No Mere Mortal is awash with enchantment, danger, and spicy romance. 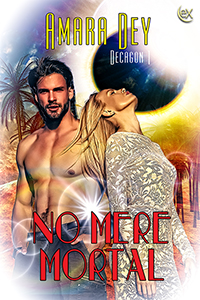 The sound was faint, barely a swish, but Bolt heard it loud and clear.

The entities who preferred the gloom were here. They arrived the moment the flame of his prison torch had turned to dying embers. He rose to his feet without jangling his manacles, and peered into the darkness, listening for more noises.

As a child, before he learned how to send them away, his heart would freeze into a block of ice and seeped frigid water through the strands of his veins. Now, here he stood, more helpless than when he was a boy. Without his magic he couldn’t dispatch them or protect himself against them. A wave of despondency washed over Bolt with such force it left him breathless. He squeezed his eyes shut while he replayed the events leading to his imprisonment, and soon his demise, in his mind. A sword swung with ferocity, and a young man’s body crumpled. His severed head rolled in the arena sand and came to a standstill, with sightless green eyes staring at the blue sky.

A cacophony of emotions assaulted Bolt, and a thick lump wedged in his throat. Why didn’t I stop it before it started? But neither he nor any existing magic could right his wrong. He deserved punishment, but not death by their fatal touch. Determined not to cower before them he stood tall―shoulders back, fists clenched―and braced himself for the inevitable. When his shackles fell from his wrists, his heartbeat drummed out the clang of the metal on the stone floor. Then unexpected, brilliant, glorious light filled the dungeon, and Bolt grinned at his visitor while his heart rate slowed.

“Thanks, man.” Bolt clapped his brother on the back. “I picked up on a noise and assumed it was the local inhabitants.”

“I wouldn’t leave you down in the Pit with no illumination, no magic, and at the mercy of the RDs from Twilight,” his sibling said.

“Am I moving to the Tower?” Bolt asked.

“Yes, but not to re-incarcerate you. He requested a meeting.”

By he, Kabu meant their stern chief, Oddu.

“Will he allow me to say my piece?”

“The briefing isn’t about your incident.”

“I can’t imagine why else Oddu wants a chat.”

“You damn well know the boss imprisoned you as shock treatment for your temper, brother. Not long after your unfortunate episode, Banda warned us the Moonfolk were ready to invade. We’ve asked the Ancient again, but he won’t enforce a lockdown on Moonshade, despite the failure of Overall Protection, and no guarantee the exclusion spell will hold. The select mission is a top priority at this point―and assigned to you.”

Bolt raised his eyebrows at the last piece of news, and then his expression turned solemn. Moonfolk blood magic practices had led to their banishment, a move supported by most Decagons except for Greyclouds, who stayed neutral, and Garnets who sympathized. Even the Ancient harbored concerns about the effects of perpetual night on daylight beings. He ordered their leader to light up Moonshade, but the master ignored him, and with the aid of mind control, he compelled his followers to embrace the darkness.

Their hatred for Radiance fueled by the pain of mutation, their blood magic super enhanced by countless sacrifices, Moonfolk were now ready to retaliate against their displacement and the select, and no one else could stop them.

“Why me?” Bolt narrowed his eyes. “I’m unfamiliar with Earth, and we’ve chosen a human select.”

Kabu gave a derisive snort. “Do you think Oddu isn’t aware you and the mermaid attended Riva’s funeral?”

“She was my friend, the mermaid’s sister, and the select’s mother.”

“Hey, I agree with what you two did. I raised my hand in favor of dropping the ban on Earth descent.”

The Ancient had banned everyone from traveling to Earth after his son, Elder, died in the first journey. That’s why humans never learned of Decagon powers. They knew of their friends and counterparts, the Santeria Orishas, and adulated them. In return the Orishas helped and protected them in times of hardship, distress, and danger. But the select wasn’t a Santeria practitioner. She needed strong persuasion to believe him and help them.

“Why didn’t Oddu give you the mission?”

“I’m needed on Decagon to stop magical accidents during defense preparations. Mishaps aren’t my decree power, but I’m still better than anyone at correcting them. Besides, same as the rest of us, you’re to do your part. If you succeed, you’ll receive a pardon and your old job reassigned to you. I waited for the chief’s word on that. Otherwise, I’d have arrived sooner.”

His clever sibling knew he’d take on the challenge of gaining the human girl’s help, for exoneration. Bolt’s magic crackled through his body on its return, and he shivered.

“But I thought the mermaid wanted the mission, considering she’s the select’s family?”

“We’re short two, without you and the select. Both the mermaid and the chief are busy readying their warriors. She assigned you the mission, and since you’re a persuader of sorts with the ladies, the boss agreed.” Kabu gave him a shrewd grin.