No More Girl Next Door

Struggling stage actress Sasha Wyles is done with the boring “girl next door” roles that get tossed her way, and done with egomaniacal men who can only love themselves. After a spontaneous encounter with a gorgeous lesbian, Sasha begins an affair with the sexually adventurous bartender at the restaurant where she moonlights as a waitress. Meanwhile, her day job at the local police academy heats up as she realizes that there may be more to her boss, the stoic Officer Hernandez, than meets the eye. It isn’t long before Sasha is center stage for the sexiest time of her life. 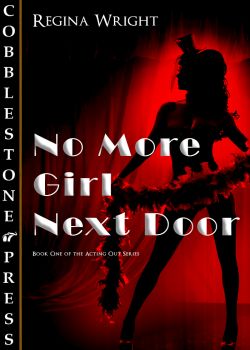 No More Girl Next Door

More From Acting Out

No More Girl Next Door
Regina Wright
In Shelf
$4.99 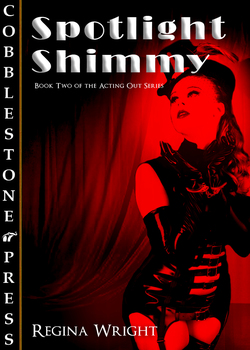 Sasha’s eyes were gritty and glued shut from dehydration and lack of sleep. She had an acid churn in her gut that told the tale of too many Moscow Mules and cheap late-night beers drained in a willful attempt to forget the unpleasant realities of her current situation.

She turned her face into her pillow to blot out the sunlight from her attic dormer window. The blasted rays kept hurling themselves against the backs of her eyelids with the force of a supercollider. Sasha’s overindulgence had been an attempt to dull the torture of a night out on the town with him, and then later, a way to numb herself to the very bad choice she was destined to make all along.

A shift of her hips confirmed that he was still there, his cock already growing hard from the slight brush of her skin. His breathing was still even, but grew shallower as his body awoke to her presence. He slung his wrist over the dip of her waist, splayed his hand over her soft lower belly, and pressed her back toward him. The evidence of his reawakening desire nestled into the cleft of her buttocks, and his breath heated the back of her neck as his nose found the indent at the base of her skull. If she did nothing, he would sleep on. But hung over as she was, her nipples tightened into harder buds with each of his warm exhales. It was too late to be strong this time anyway.

It hadn’t been a date of course—those were a thing of the past. Hess was about as likely to call her for dinner and a movie as he was to stop fucking every under-thirty piece of ass who got hired on at L’Auberge, the ritzy French restaurant where he ruled as head chef like Louis the XIV. Still, they had a workplace and friends in common; too many to forever avoid interacting socially.

Due to the fact that Sasha’s acting career was still pro bono, so to speak, she wouldn’t be quitting L’Auberge any time soon. It was the best waitressing gig in town, as long as she didn’t mind watching her ex get into the pants of half of your coworkers. At least Hess rarely deigned to cross “the line” and openly fraternize on the server side of the kitchen during peak dining hours, so she could avoid him most of the time. She was sick of hiding out socially, though, and finally bit the bullet, agreeing to a rare night of clubbing with her L’Auberge friends.

It was all kosher until they hit the gay bar. With his tousled Hugh Grant charm and rangy body, Hess was catnip for any woman with a hormone left in her body, and more than a few men. Sasha had prepped herself well, kept a drink in her hand and either Wally or Lin at her side the whole night. But when they got to Bar Paradiso, a couple of gorgeous women in painted-on club wear had started grinding with Hess on the dance floor, running their manicured hands over his damp shirtfront, reaching around to knead his muscular ass. Sasha could see that he was hard for them, his cock straining at the zipper of his pants in the throbbing lights of the dance floor. The ragged feelings this brought up in Sasha didn’t make sense. Those women’s “fuck me” eyes were only for each other—anyone could see that. Hess was just a chew toy, a bit of foreplay to get their juices flowing for later when they devoured each other in their boho chic loft, after putting their inevitable rescue cat in the bathroom so the sounds wouldn’t freak him out.

Yet something about the scenario rubbed Sasha raw. It was seeing Hess so wanted that did it, and the open wanting mirrored so clearly on his own face. It was just too much for Sasha when she was feeling so utterly undesirable herself. Just weeks ago, Hess’ body had been under her hands, bucking and writhing as he came again and again in her mouth, her hands, her slick, aching pussy.

Then one of the lesbians, an athletic African American woman in a white cashmere sweater, caught Sasha’s eye across the dance floor and smiled. Her teeth gleamed between lush lips painted brick red. Though she’d been caught baldly staring, Sasha was too mesmerized by the woman’s palpable sexual charisma to look away. Too many Moscow Mules had obliterated her sense of club etiquette. All she could do was probe the woman’s features for that mysterious quality that Sasha so obviously lacked.

It wasn’t just a lesbian fantasy thing for Hess—she knew him that well at least. The look on his face told her he knew he wouldn’t be ending the night with either of those women, but he found them intoxicating just the same. He wore a helpless, goofy, teenage-boy-kind-of grin and didn’t touch them the way they were touching him. He knew the rules, and he loved the constraint. He loved to be told “no,” which was one reason why he’d broken up with Sasha at the farthest point of a walk out onto the Griggsville Jetty—the very place he’d kissed her after their first “date” hanging out late after hours at L’Auberge. Since that kiss—no, since the moment he’d begun flirting with her during pre-service tastings, she’d only ever told him yes. Yes. Yes. Yes.

Lost in her misery, with Lin and Wally swept into the frenzy on the dance floor—Lin’s request for the dance remix of Bon Jovi’s “Livin’ On A Prayer” had finally been honored—Sasha watched in astonishment as the cashmere-clad lesbian squeezed her way through the writhing bodies to approach her. There was precious little room on the dance floor, and the bass was loud enough that Sasha could practically feel the tiny individual bones in her ears vibrating to the point of shattering.

As she drew near, the chestnut-skinned woman put her painted lips right up to Sasha’s ear, molding her body along Sasha’s side in order to be heard as the crowd surged around them. “Hey there,” she said, her breath ripe with some fruity alcoholic drink, sweat and something woodsy diffusing from her pores. “I’m Kat. Don’t worry. We’d go for you way before we’d do him. You are ripe, honey. Like a juicy peach.”