For over 250 years, the use of the tarot for divination has been a mainstay of mystical and occult practices. The themes and forces represented by the cards are said to govern our lives and our destinies. Whether you believe that or not, the story of the cards is nevertheless the story of our lives -- the accomplishments and the pitfalls, the path from soaring joy to crushing defeat and back again.

Caleb is fleeing from the realities of his life, hiding in a dream of the Moon. The God of Dreams finds him there and draws Caleb deeper into the night with promises of passion and closeness otherwise denied to him. But in the waking world, a chance for something real forces Caleb to choose between love and immortality. 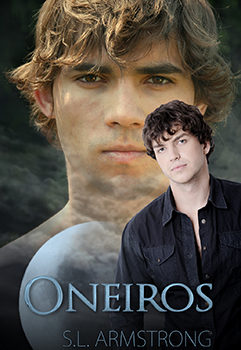 "The depression aspects ring so true, the dream-world that draws Caleb deeper and deeper, like a rip tide, is so treacherously desirable, so long as Caleb continues as Morpheus desires, and Scott ~ the one thing in the daylight world that's worth waking up for ~ is the perfect hero." -- Rainbow Reviews

"Such a dark story, but the silver lining definitely makes it a top read." -- Coffee Time Romance

"[A]lthough this is a potentially dark subject, the story is uplifting rather than depressing. This story definitely hooked my attention." -- BookWenches

"[T]he handling of Caleb's medical condition... was well done as it's all fairly new to him and he has yet to adjust to what it means, and not let it define him... [T]he writing was very good at portraying how fogged Caleb's brain was as the obsession went on, and how mystical and wonderful the dream world was. Caleb's thoughts and feeling were well fleshed out and you could relate to his fears and sense of loss of his life as he'd known it." -- 3.5 Stars from Tam at Brief Encounters

Caleb shut and locked the door when he managed to make it home. He was hungry, exhausted, and sore. All he really wanted to do was go to bed. After all, he had a dream-lover he was aching to see again. If his tired imagination would humor him, he'd maybe get off in this dream.

Scampi yowled at him, demanding a full bowl, and Caleb was feeling a little more human and less a pincushion by the time he settled on the couch with a beer and some supper. He spent a good hour mindlessly watching television, losing himself in the dramatic world of a small town. Caleb hadn't realized he'd fallen asleep until Scampi jumped into his lap, pawing at his hands and demanding attention.

Caleb quickly stripped down and crawled into bed. Almost as soon as his head hit the pillow, he was asleep. He knew he was asleep, even as he dreamed. It was a strange, awkward knowledge, sitting up in his bed in the dream while he knew he was still in bed, asleep.

"Again I ask, does it matter?"

Caleb turned his head toward the door. Leaning against the jam, in all his naked glory, was Morpheus. Caleb took his time looking, eyes sweeping from head to toe, lingering on the lax sex resting against hairless skin. "Is this real?" he asked, voice rough as he raised his eyes to meet Morpheus'.

Morpheus smiled, the expression soft and indulgent. "You are lonely."

"There are millions of lonely people out there," Caleb said as Morpheus stepped into the room. "Why am I different from them?"

"Why is anyone drawn to anyone else?" Morpheus stopped at the edge of the bed, his arms folded, and looked down at Caleb. "I have always been a part of your dreams, Caleb. The only difference between then and now is that you are aware of me as you were not before."

Caleb's heart began to race, color rising to his cheeks as he stared up at Morpheus. "Are... you going to hurt me?"

Morpheus shook his head, unfolded his arms, and cupped Caleb's face. "No. Never would I hurt you," he murmured.

The touch was so real. His skin was soft, warm and smelling of rain and moist earth, against his overheated face. Those hands drew his face upward, and Caleb whimpered when Morpheus' lips touched his. It wasn't the desperate passion of the night before; this was something sweet, something tender. Caleb parted his lips, his hands resting atop Morpheus' as Morpheus slid his tongue into Caleb's mouth.

"Dreams are the gateway to the self," Morpheus whispered into his mouth. "Dreams are what give heroes their courage, kings their bravery, and the common man a reason to believe. Dreams are made of the stuff of legends, Caleb, and I am the maker of those dreams. Dreams are not 'just' anything."