For over 250 years, the use of the tarot for divination has been a mainstay of mystical and occult practices. The themes and forces represented by the cards are said to govern our lives and our destinies. Whether you believe that or not, the story of the cards is nevertheless the story of our lives -- the accomplishments and the pitfalls, the path from soaring joy to crushing defeat and back again.

Aaron is a dominant soul stuck in an ivory Tower. His inexperience with the submissive side of the Scene prompts a fellow top named Travis to offer Aaron a chance to see what he's been missing. When Aaron agrees, the experience threatens to knock down Aaron's entire house of cards. And he's not entirely sure he minds.

"[A]s the Tower is change, so the story evolves, Aaron's untested beliefs about himself crack and crumble, and I found myself more and more drawn in to Aaron and Travis's explorations ~ of sensation, of trust, of what it means to be in a D/s relationship. Impressive." -- Rainbow Reviews

It should have made him uncomfortable, the pulsing pain that slowly seeped into his muscles with each strong blow. It should have made him tense even more and call it all off, but instead he felt the beginnings of arousal flare low in his gut. It made the light rocking of his groin against the bedspread so much more erotic than he'd thought it would be. The pleasure of it dulled his wits, or maybe it just forced his mind to stop questioning every reaction so he could simply feel. Either way, he found himself relaxing even more instead of tensing against every strike, and Travis' voice coached him through every moment.

"You know how it is from my place. You watch the reactions, how the body moves, and you play around with pace, power, and placement until you find just the right combination. When you receive... you feel that experimentation, don't you?"

The pressure became more stingy and rode higher up on his backside, and he grunted, tensing when the hand went too high. "Yeah," he admitted, his voice a little breathless as his heart pounded against his ribcage.

"And you feel when that perfect place is struck?"

Aaron unconsciously licked his lips as he closed his eyes and gave in just a little more, following the subtle instructions in Travis' words without a fight. He didn't know that there really was a perfect place on him, but as the hand moved around his backside, the angle changing, he felt the throbbing pleasure spike. Another gasp left him as his eyes flew open, and he stared blindly at the headboard. "There!"

A soft purr of sound sent a shiver down his spine, and he shocked himself by leaning up into the next blow. The force of it sent him rocking forward again, and his cock twitched as he bit back a moan. The action was repeated on his other cheek, and his knuckles went white for a moment with how tightly he gripped the sheets.

"You find that place," Travis murmured sensually at his back, "and then you make it ache, so even the smallest brush of your fingertips makes their toes curl."

Aaron lost track of how many blows were landed, but each one of them slowly ate away at his crumbling resolve to stay silent. The throbbing pain sank deeper into his skin until it became an ache that he'd never experienced before. It hurt, yes, but it was good, an incredible sensation that bordered pleasure and pain, both and neither all at once. In the back of his mind, he knew that he usually took his submissives further. He would turn the ache into something deep and burning, raising welts and bruises into supple skin, but that wasn't what he wanted, wasn't what he needed, and Travis seemed to know that without him saying a single word.

Hit after perfect hit against that area, and he could feel his cock leaking against the sheets, the friction adding just the right amount of pleasure to keep him comfortable with the pain he was experiencing. He felt Travis settling into a rhythm that felt just right, even though he had no frame of reference beyond his own topping. Right when he thought he couldn't keep his voice to himself, everything stopped. No blow landed for several seconds, and his brow began to furrow as he wondered what Travis was up to.

The moment he took a breath to say something, the singular sensation of metal brushing his skin had his toes curling, and a loud moan erupted from his throat as he twitched and tensed against the edge of the bed. God Almighty! He'd never known that was what his subs felt when he teased them like this! He squeezed his eyes shut as another caress of Travis' homemade glove sent electrifying pleasure through his nerves. "Oh, fuck!" 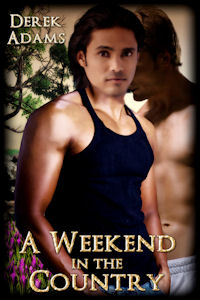 A Weekend in the Country
Derek Adams
In Shelf
$1.59