Out of the Darkness

From the depths of darkness, a cry of distress leads Mark Lander from a world of violence to a place where romance awaits . . .

It’s January 1994 and it is proving to be another hot summer in Sydney Australia. During the early hours, lonely in his thoughts and strolling along the shoreline at Freshwater Beach, Mark Lander, a war correspondent home on leave, is distracted by cries of help from the surf and wades in to rescue a swimmer in distress.

Unbeknown to Mark his courageous action will make him an unsuspecting champion in the defense of the rescuee, Robyn Shelly. Inquisitive by nature, a requirement of his chosen profession, he teams up with his best friend, Detective Sergeant Jim Sanders. Their respective investigations will pull them deeper into a world of violence and mayhem.

Despite his personal emotional anguish, Mark finds himself captivated by Robyn’s beauty and gradually falls in love with her. However, although he gladly accepts the unexpected friendship, will the trials still to come dash any hope of romance and eventual happiness . . . ? 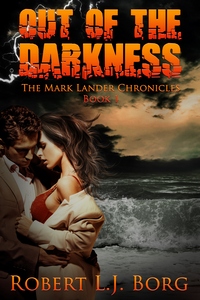 Out of the Darkness

More From The Mark Lander Chronicles

She cut me short with yet another scream and then took off like a greyhound out of a trap towards the beach.

I went to follow her but then thought better of it. I should give her some time alone. I stepped back into the house, and helped myself to another drink, taking it with me to the bathroom. I needed a shower.

Feeling refreshed, with clean clothes on my person, I went in search of Robyn. She was seated cross-legged on the beach, staring blankly at the surf as it rolled lazily up the shore.

She leaned over onto me, resting her head on my chest. I wrapped an arm around her, keeping her close. On impulse, I kissed her gently on the top of her head. Her hair smelled of sea air and orange blossom.

“Will you take me somewhere nice tomorrow?” she whispered as though she didn’t want to interrupt the tranquility of the surrounds.

“How about we go on a picnic to Bobbin Head?”

“Sounds fine,” she said, and then after a short pause, added, “did you really feel ill at the inquest?”

“How come? I would have thought you would be used to those sorts of things.”

“Robyn, I am sure you realize how I feel about you?” I began. “It dawned on me, how close you came to being killed that evening. It made me feel ill that I might never have met you . . . that I would never have known you.”

She squeezed my arm and then rolled around, so we were facing each other. I leaned forward, and we kissed. As much as I would have wanted to make love to her there and then, I resisted. She would soon be leaving Australia, and we might never see each other again. What I really wanted was to have Robyn in my life long-term. However, I didn’t sense the same commitment coming from her.

“What’s the matter?” she said.

“Nothing,” I lied. I kissed her on the forehead. I stood and pulled her up. “It’s time to move,” I added.

When we arrived at the house, she disappeared into the bedroom. I remained on the deck and polished off the last drop of wine that was in the bottle. It was warm and tasted slightly acidy, but what the heck.

She seemed to be taking a long time at whatever she was up to, even by any woman’s standards, so I went into the house to look for her.

“In here,” she replied in a low sultry voice.

I put the glass down on the coffee table, took a deep breath and let myself into the bedroom.

To my surprise and delight, she was stark naked, lying on her side. Her head propped by her arm, elbow on the mattress, facing me as I walked in. Her smile was enough to melt an ice block in seconds.