Power Play: Donnie and the Maid

Divorced Donnie hasn’t had it easy since his wife abandoned him for a six-figure income with the richest man in the county, taking their daughter with her. He knows he’s a bit of a daydreamer—a writer, a poet—who just can’t be bothered with real world things like preparing meals or cleaning toilets. When his twelve-year-old daughter complains that Dad’s house is “grody” and tells him, “Mom keeps threatening to call social services,” Donnie breaks down and hires a housekeeper. Sexy little Elena is a godsend, in more ways than one, descending on his house with a feather duster and a skirt so short it takes his breath away. And while Donnie struggles to keep his lust—and his growing feelings—in check, Elena finally makes it clear that he’s more than welcome to service the new maid! 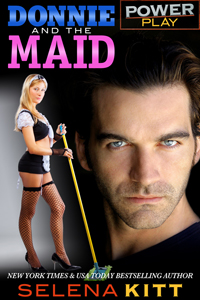 Power Play: Donnie and the Maid

“Sorry,” he murmured, still enthralled by the sight of her on her knees. “I just…”

She blinked up at him as he took a step forward. He couldn’t look away. Her eyes were bright, questioning, full lips slightly parted, breath coming fast, face flushed, probably from all the scrubbing she’d been doing, but it excited him nonetheless. He towered over her as he took another step forward and she had to tilt her head all the way back to meet his eyes.

“Did you… want something?” Elena swallowed. He watched her throat work with the motion and his cock throbbed in response. It didn’t help knowing she was on eye-level with his zipper. Did he want something? Fuck yes he wanted something. He wanted her. But he couldn’t say that. He couldn’t possibly just take what he wanted, no matter how much he wanted it.

Don reached a hand out and swept away a strand of hair resting on her cheek like a comma, tucking it behind her ear. Elena’s eyes softened as she looked up at him and licked her lips. She looked like she wanted to say something and he wanted to hear it, whatever it was, so he stayed quiet, stroking her cheek with his thumb. Her skin was so soft, so impossibly soft.

“Did I… disturb you?” Her voice was even softer than her skin, barely a whisper, as she peeled off a pair of pink rubber gloves. It should have been a very unsexy act, but somehow any divesting of clothing, even something as silly as a pair of rubber gloves, made him want her even more. He knew he had to be imagining it, but he could have sworn he felt the heat of her breath on his crotch, even through the denim of his jeans.

He shook his head, fingertips trailing down the side of her neck. She shivered. It was a slight thing, a mere tremble, but he felt it. He saw her assent in her eyes, in the way she tilted her face up, shoulders back, breasts jutting proudly in her button-down blouse, which was unbuttoned to very immodest depths. Her cleavage was on display for him. In fact, it felt as if, just by her posture, she was completely on display for him alone.

Don struggled. He struggled with his own lust. He struggled against taking this any further than it had already gone—the flirting, the teasing, the suggestive comments, and now, his hand tucking hair behind the shell of Elena’s ear. He struggled to stick to his convictions because while Elena was beautiful and he was beyond attracted to her, it would be a very bad idea to get involved with her right now. He knew this, instinctively. She was fragile, vulnerable. Doing this would be taking advantage of her.

So he struggled to keep his cock from bursting, alien-like, from his zipper, cleared his throat, and got ready to head back into seclusion. And Elena knew it. Maybe she saw it in his eyes. She lifted her own hand to his, pressing it against her cheek. The slight tilt of her head, the way she rubbed her cheek against his palm, was an invitation. He knew it, understood, and still he was going to resist.

Until she turned and kissed his palm. It was the press of her lips, the heat of her breath, the way her eyelids fluttered closed, that did him in. He let out a soft groan, thumb trailing over her jaw, and Elena turned her head again so his thumb slipped between her lips. Don held his breath, feeling her tongue curling, the soft, wet suck of her mouth on his thumb making his cock throb in response. Of course he was picturing her lips wrapped around his dick instead and he couldn’t draw any other conclusion except that she was imagining it too.

But he knew for sure when she went up fully on her knees, pressing her cheek against the seam of his jeans and rubbing her head there, like a cat begging for attention. Don groaned as her chin grazed his shaft through the denim. The sight of her on her knees for him in the middle of his bathroom was driving him mad with lust. He knew he wouldn’t be able to resist her, this. It was going to happen, and if it was, he didn’t want it to happen here.

“Elena.” He whispered her name, rubbing his thumb against the soft, wet press of her lips. She tilted her eyes up, asking him with that look, do you want me? He couldn’t believe she could question it, given the state of his erection, but he understood. She wanted to know if it was okay, if she had his permission. He found himself feeling strangely powerful and in control with her like this, and the communication between them was all happening without any words at all.

“Come with me,” he urged, holding his hand out to help her up. 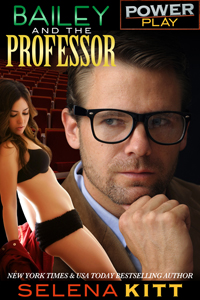 Power Play: Bailey and the Professor
Selena Kitt
In Shelf
$2.99 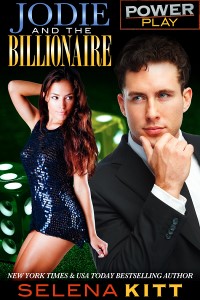 Power Play: Jodie and the Billionaire
Selena Kitt
In Shelf
$2.99 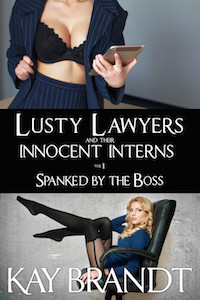