The Telen know the war with the Palesei will come. In their need to solve their most important problem, they invite human men to participate in an outstanding project. Sidarra is one of them. He falls in love with a Telen and in the hands of kidnappers. Amid war, uproar and rejection, they both have to prove if their love withstands the odds. 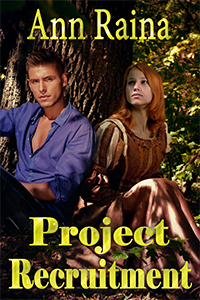 “I bring you the subject Sidarra,” the male nurse announced and stepped back.

A tall, lean man with long hair and a face with a prominent chin greeted him with a warm smile. “I am Oberat. I apologize that you were taken with such high security measures.” He fumbled to open the handcuffs. “It was a necessary—”

The male nurses moved in, but Oberat waved him away. “No.”

Sidarra pressed harder. It was good to vent his anger and his hands, though numb and not fully functioning, were at the right place. He saw his opponent redden with lack of air. “You lured me into this program, did a hundred tests with me and now you abducted and treated me like a criminal.” He pushed him back into the large room with all strength he could muster. Two women, one in Oberat’s age, the other much younger, stared at him with frightful eyes, but did not interfere. Sidarra would not have minded another handful of enemies to fight. “Am I nothing to you but a primitive subject?” He pressed harder, not caring for the consequences. “Do you think you can you deal with me as you please?”

“No.” Oberat put his hands around Sidarra’s wrists, slowly increasing pressure on the joint of ulna and radius. He steadied and resisted Sidarra's further pushing. “We had no right to do this.”

“Right.” Sidarra saw dots swimming before his eyes. He lacked strength due to the long flight without food, but he was determined to hold on. “You had to ask and you did not do it! Instead, you abducted me!”

“I think a darker blue suits you well.” Oleyni pulled out a pullover and pants and a warm undershirt. “It might get a little too cold for you in the evening. Better wear something warm.”

“Oh, washing! Yes. Come.” She showed him the adjacent room. If Sidarra had expected faucets or anything recognizable, he was disappointed. “If you drop your clothes and stand here, the water will swirl around you. Shall I show you, or do you just want to try?”

“Fine.” Oleyni folded her hands in front of her lap and watched him, waiting.

“Do you mind? You fainted some minutes ago, and the warm water might affect your circulation again. It could be that you need help, right?” Her eyes were wide open, portraying innocent ideas.

Sidarra smiled helplessly. “You mean, you are here to lend a hand?”

“There might be spots you can’t reach, don’t you think?”

His smile blossomed to a laugh that they shared. “You are right.” He shed his shoes, pants and jacket, revealing the net around his torso. “I might need help. This is all too strange for my taste.”

“You will get used to it.” Oleyni shrugged. “I guess I would feel the same if I was in your place. Your village seems to be strange, as well. You live in huts, I heard.”

He frowned as he approached the area where he assumed the water would flow. “What do you know about Ethisan?”

“That is your village? Well, I know that the continent is less fertile than ours. You drill wells for water and most parts of the continent are hard on the people. The majority consists of farmers and herders, some teachers, too. Temperatures are of modest warmth. It does not get cold, so you don’t know snow. There is just one developing city, with companies prospering from selling machines and ground transportation vehicles as well as many different tools. Trade markets have just recently begun to stretch to foreign countries in the north. Did I forget something?”

Water poured over Sidarra’s head and shoulders. It was warm and very pleasant, washing away sweat and dust. He closed his eyes and let Oleyni’s voice become the background of the pouring water. Warm hands massaged his shoulders, gently groped through the net on his back and went on with his buttocks. He pressed both hands against the wall and enjoyed the attention, moaning. When Oleyni was done down to his feet, she used soap to wash his hair, standing on tiptoe to reach his forehead.

Sidarra was so content he woke from a dream when she slapped his butt. “I guess if you get any cleaner, you’ll be translucent.”

He turned and the water stopped. Wiping his eyes, he made a step to where she waited with a big and very soft towel. “Thank you. That was very kind of you.”

“Your muscles felt like thick roots. Is it better now?”

“Much better.” He dried his hair and body. “How did you know?”

She pursed her lips and the sparkle in her eyes revealed her mischief. Hands folded behind her body, she turned her shoulders from left to right. “Female intuition.”