Romance Through the Seasons

These stories are all centered on a particular Holiday and celebrate the love of family and the deeper, more inspiring love of soul mates. It's a world of spirited, spankable women and dominant men, so sit back and enjoy the glow of delicious denouements, true reconciliations and feisty happily ever afters... 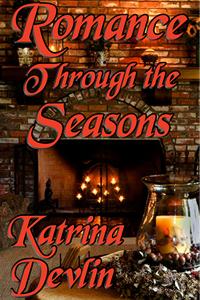 Romance Through the Seasons

Julia was sick at heart when she listened to Anna Morelli's message inviting her and her nine-month old twins, Alex and Annabella, to Thanksgiving dinner at the Morelli house. Well, compound actually was the nomenclature best suited to describe the sprawling five-acre estate in the genteel Far Hills countryside. Anna had thoughtfully included Julia's sister, Megan, and their widower father, Jack Bradshaw, in the invitation as well. Julia was torn. She felt horrible about denying Anna and Stephano Morelli their right to see and spoil the newest grandchildren, but Michael was sure to be there as well and Julia Bradshaw Morelli had no desire to see the lying, cheating handsome rake that was soon to be her ex-husband. She had packed up her babies and left her husband of five years the day after their June anniversary when she discovered his terrible, heart-wrenching deception. Although he had tried to talk to her many times since that awful day, Julia had remained steadfast to her plan to divorce the man she had once vowed to love forever.

The Morelli family had also attempted to intercede on behalf of their beloved youngest son. At thirty-two, Michael was already the chief financial officer of Morelli Brothers, Inc., the family run wholesale foods and markets that were sprawled across the entire eastern seaboard. He worked hard for both his family and for his own satisfaction too, Julia knew. When she first met Mike, he was working as a manager in the Madison, New Jersey store and she was a freshman at Drew University. The chemistry between them was instant and irrefutable, but they waited to marry until after Julia had completed her Ph.D. studies in Comparative Literature and Michael had finished his MBA in Finance. They had wanted the best for their lives and their future family.

Life had progressed perfectly for the young Morellis. They bought a condo and then turned that investment into a cozy cottage in Morristown, which was perfectly situated near the Corporate Headquarters in Basking Ridge where Michael's office was located. Julia worked her way from adjunct to English Professor at nearby Cloister College.

Everything was working out and when Julia became pregnant, she and Michael were ecstatic. Her sister Megan and her dad were so happy for her. Mike's three brothers and two sisters were delighted, as were Anna and Steph. The twins were born on Valentine's Day and Julia and Michael were flung into the rhapsody of new parents. When spring came, they settled into the sunny season and their new responsibilities in a way that made Julia's heart glow in the warmest way. Her life was as full and beautiful as she could ever dream it would be when the unimaginable happened.

Michael had made reservations at a tiny, upscale restaurant in Morristown for their fifth wedding anniversary. Megan, on a break with her boyfriend, had volunteered to baby-sit the twins. It was a magical evening, but Julia felt a nagging presence at the back of her mind for most of the night.

"Let's go, Michael," she finally said when she couldn't take another bite of her delicious lavender flavored crme brulee. "I feel weird. I just want to go home."

"Jule, calm down," he told her soothingly, reaching for her hand. He stroked her slender fingers in a gentle manner that normally would have her purring affectionately, but Julia did not feel normal. "Let's just enjoy our night, sweetie."

"I did enjoy our night, Mike," Julia objected. "I loved it. But I feel strange, and I want to go home, now." She pulled her hand out of his loose grasp and began gathering her wrap and purse.

"Julia," Michael chided her. "Everything is fine at home. Meg knows our cell phone numbers and would certainly call us if anything were wrong. Just relax."

"Mike, I want to leave, please," Julia implored her husband. She couldn't explain her uneasiness. She just wanted to be home; she needed to see the twins.

Michael was in a quandary. He wanted to keep Julia in the restaurant for another ten minutes because he had discovered that one of her favorite New Jersey poets was going to be dining there that evening and he had arranged for the poet to stop by their table to greet Julia. And then he was going to gift her with a diamond ring, the one she had admired in a tiny antique store in Mendham months before. He had planned this evening weeks ago.

"Just a minute, Jule," Michael said. "We'll be on our way in no time. There's no hurry, love, Meg's promised to sleep over. She wants us to have a nice evening."

Julia felt a twinge of guilt at his words; she felt as though Michael were blaming her for the bizarre qualms she was feeling, as though he were saying that Megan was more into their relationship than she was. Her spine stiffened as she swallowed the last bit of champagne in her glass.

It was her first time drinking since she became pregnant. Since she had pumped breast milk for the twins' nightly feeding, she was assured she could have a glass of wine tonight. However, the champagne had made her feel fuzzy and belligerent.

"I'm sure Meg is looking out for us," she said derisively. "But, you see, I want to leave now, Michael! Does that matter to you? Does your wife matter to you?" As she finished speaking, she stood up and stalked over to the desk near the door, waiting for him to follow.

Michael's palm itched to lesson the scornful woman who swept past him in some rules of common courtesy. Julia was acting like a shrew. A few times in the past, he had swatted her backside when she was behaving in a childish or unladylike manner. Julia had reacted with the appropriate outrage and dismay and even with what he thought was a conciliatory attitude. That acquiescence was what made him think that she actually enjoyed his "take charge" attitude.

However, that night, he simply followed his wife to the front desk where he paid for their dinner. He took her hand and led her to the car, never saying a word about her irrational behavior.

When Julia inadvertently discovered the email meant for her husband from a mysterious Tess, who was sorry to have missed him the prior night and who hoped everything was okay, she crumpled into her own pain, shocked to the core that her husband was involved in anything so sneaky. She never said anything to Michael, instead opting to share her pain and misgivings with her sister Megan, who was in the middle of a royal battle with her longtime boyfriend and probably not the most impartial of listeners. Megan simply backed up her own doubts and urged Julia to take action against her cheating husband. Julia's own ambivalence about the evening was easily transferred to Michael and she soon convinced herself that he was planning a tryst that night. If she had stopped to think, she might have realized that her own behavior was laced with the post-partum gloom that many new mothers experience. She had brought home twins just three months earlier. Her life had changed. She wasn't going back to work until the fall semester. She was in a serious funk.

Julia didn't think about anything except that Michael had betrayed her. She immediately packed up her bags and the babies and went to her father's comfortable home in Mendham. She was so upset and bereft, her father believed the worst without a word from her and he sheltered her possessively. Julia never allowed Michael more than a few moments alone with her again. Indeed, she eventually did such a good job persuading herself that her husband had been unfaithful, that she gave herself leave to go outside the marriage.

For several years, she had been the recipient of major flirting from one of her colleagues at Cloister. When he heard through the college grapevine that she was back living at her father's, he stopped by to drop off gifts for the babies. He was so charming and attentive; Julia eventually gave in to his teasing banter and promised to go out for a drink with him. She used one excuse after another until finally, last weekend, she went out with Martin Delaney.

The evening had stretched interminably and awkwardly and Julia was forced to admit to herself that she was still hopelessly in love with Michael Morelli.

Now she was confused. Anna's voice mail message sounded so warm and so inviting. Julia was torn. Anna was inviting them all for the whole weekend, from Thursday to Sunday at the Morelli estate. There were sure to be sparks. Whenever Michael would visit the twins at her father's, he never seemed repentant, instead he seemed as though he were the wronged one. Julia didn't know if she could handle a whole weekend of his accusatory glares. But she felt so bad that Anna was missing these wonderful moments of the twins' development.

She called her father at his law firm and he wholeheartedly agreed to go and then she dialed Meg's cell phone.

"Megan is indisposed, Jule, can I give her a message?" Bryan's voice was as powerfully compelling as ever.

"Only that we've all been invited out to the Morellis for Thanksgiving. You're welcome too, I'm sure. They'd like us to stay the weekend. Let her know, okay, Bry?"

"Will do, Julia. And we'll be there, the Morellis are good folk. You talking to Mike again?"

"He's crazy about you and those babies, Jule, and you know it."

"I'm thinking he should have taken control of the situation," Bryan said. "I think you need a good talking-to, that's what I think."

Julia groaned into the phone. Bryan was just the kind of Neanderthal that Megan loved to read about in those silly romance books she had by the boxfuls in her apartment. He had a good heart but he was all arrogant male for the most part.

"Hey, Bry, guess what? Remember Martin Delaney?" she said flippantly, knowing that Bryan never liked the Philosophy professor who made a habit of hanging out in the town sports bar which Bryan owned with a few of his buddies. "Well, he finally got me to go out with him. And let me tell you, we had a ball. I haven't laughed so much in months," she lied.

There was quiet on the other end.

"That was a mistake, Julia," Bryan's sober voice made her want to cry.

Julia slammed down the phone and swallowed hard to keep the tears from welling up in her eyes. Since Bryan's return to her sister's life, he had made no secret of his feelings toward Julia's estrangement from Michael. He probably would have taken control of the situation in one of his barbaric, he-man type of moves. Bryan was a big man, as tall as Michael but a bit wider in the shoulders. He was your typical brawn but he did have brain too. No wonder Megan went through her periodic break-ups with the man. It didn't seem to matter to him that his own girlfriend believed her brother-in-law was cheating on her sister. Julia picked up the phone again and dialed the Morelli number. 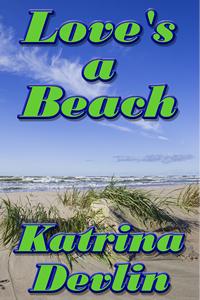 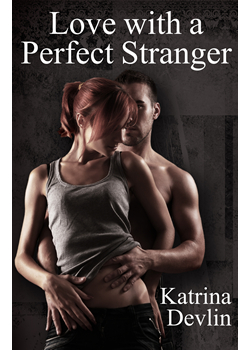 Love With a Perfect Stranger
Katrina Devlin
In Shelf
$6.50
Tweets by
sirenbookstrand