Romeo's Dead But Juliette Faked It

While landscaping, Gretchen Parks, a descendent of a powerful witch queen, uncovers a vampire in her backyard. Time’s are tough and she filches treasure from his staked skeleton, unaware she’s just broken her ancestor’s curse. Once awake, suave Frenchman Jean sets his sights on Gretchen. His belle laide, beautiful ugly woman, is far from being a romantic. Convincing a jaded middle-aged woman that she’s still smoking is tough work, but turning her into a vampire hottie may get him staked. Toss in a coven of goddess-worshipping witches and a pack of supernatural wolves and watch this cheery town squirm like a chemical-soaked ant hill.

Can’t witches, goddesses, vampires, and townsfolk all get along? Apparently not in this memorable tale of how matches not made in Heaven sometimes work and why walking in the woods at night is ill-advised (unless you want to catch your neighbors dancing naked in the moonlight). 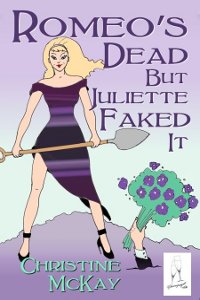 Romeo's Dead But Juliette Faked It

Jean was suddenly at her side, hand laid over hers. “Our souls cry out for one another. Can you not hear them?”

Gretchen swallowed hard, trying to rein in her reaction to that smooth French accent and those liquid green eyes. God, he smelled good. Fear, you idiot. You should be feeling fear, not lust. “My soul cries out for a dark chocolate whipped espresso with sprinkles. Unless you have that hidden somewhere on your person—“ That brought to mind naughty images of her frisking him. She cleared her throat and tried again. “Please don’t make me call the cops.”

“You would leave me?”

He sounded so hurt she almost laughed. “Yes, I’m going home.” She opened the car door, forcing him to step back to avoid being hit by the swinging door.

“But I’ll die without you.”

She paused. The melodrama and game-playing were no longer funny. She wasn’t a frumpy old woman but neither did she hold the illusion this scrumptious twenty something was at all interested in a forty-five year old in one inch heels and a dollar store purse. “They’re taking tryouts for Hamlet at the community center right now. You’re a shoo-in.” She rummaged in her purse and came up with a handful of change. “Here’s bus fare.” She held out her hand, but instead of taking the change, he made to kiss it again.

She jerked free of him again. “You just don’t get it, do you?” She slid into her seat and attempted to close the door. Her can of pepper spray was stuffed next to her parking brake. He hadn’t crossed her tolerance line yet, but he was certainly walking it.

He blocked the motion. “I can bring you to heights no man can.”

“I will take you prisoner. I will make you understand.”

Damn, those were the magic over-the-rainbow-wacky-words. He crouched beside her. She sprayed him directly in the eyes with the pepper spray. 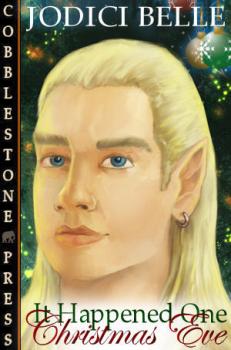 It Happened One Christmas Eve
Jodici Belle
In Shelf
$3.99
Tweets by
sirenbookstrand