Caroline Fleming returns to her hometown and buys the old house that she has loved for years.

It comes with a resident spirit, one Malcolm Hanson, who has been dead for years, and who makes an art form at seduction and lovemaking. He is without scruples, manners, or chivalry in his quest for willing partners, of which there are many.

Caroline's newfound love for Larry Gardner angers the ghost and sets him out for revenge. Caroline and Larry, along with their friends and a beautiful hooker, find a way to handle Malcolm while learning the secrets of the old house that sits high on a hill overlooking the furious Pacific Coast.

They also learn that sex does not have to be for couples only and that love can be shared in many ways.

"I grew up on the Oregon Coast and often drove by an abandoned old high on a cliff above the sea. My imagination would create stories about the people who might have lived there. This novel is a combination of several of those scenarios. I hope you like reading it as much as I enjoyed writing it." ~ Beverly ~

Larry and Caroline spent the next day preparing the little house for their friends’ introduction into the world of group sex. They changed the bed linen, laundered all the towels, chilled several bottles of wine and champagne, filled the refrigerator with snacks, found soft music for the phonograph, and even provided candles and fresh flowers in every room.

When Larry returned with all those necessities, he laughed and told her, “You should have seen the clerks watching me, probably trying to figure out what I was going to do with all the booze and flowers. The checkout woman even asked if I was having a party. I kept a straight face and said no, but that my friends are. Bet she passed that on to the others, and now they’re all trying to figure it out.”

As they left the house, Caroline looked around. “I think I’m forgetting something, but I can’t think what.”

Larry started grinning from ear to ear. He grabbed a pen and paper and wrote a note, which he put into an envelope marked Sahara and slid in the nightstand by the bed. Caroline wanted to know what it was, but he just kissed her and said, “It’s a man’s thing.”

She tried to coax him with more kissing and touching until he grabbed her hands to pull them away from his ass and penis. “You keep that up, woman, and we’ll be messing up that bed before they even get here.”

To the three participants in the night’s plan, the day seemed to pass like cold molasses. Even Sahara felt an excitement she seldom experienced anymore in her rather jaded life. She found Malcolm mid-morning and asked him if he would like to wash her back, and, of course, he was naked in the bathroom before she even had the bathwater drawn. He came up behind her as she tested the water temperature and rubbed his hard cock between her legs, then up into her vagina as he bent her over the tub. It was not comfortable, but it was quick. She thought to herself, only one more time with him today should do it.

Later that afternoon, she stripped and rubbed her body with honey. She found him in the basement on his lounge chair, napping. When she leaned over him, pressing one sweet-tasting tit on his lips, he was awake in a second and had licked off every sticky drop, all the while moaning and caressing his penis. It was erect and throbbing when he pushed her back on the chaise and slid into her. He whispered to her how wonderful she was and insisted on rubbing her clit as he drove into her. She felt herself succumbing to his fingers and quickly pushed them away. She arched up to meet him until he came, groaning his lust. When he was done, he stayed on top of her, again trying to bring her to a climax as he kissed and sucked her tits. This time she gave in to it, and it was good. After all, he was fucking more human women than just her, so what did it matter?

After he was gone, she drew a full tub of water, added perfumed oil from Caroline’s room, and soaked and shaved her body completely until every inch of her was clean and smooth. She’d learned early in her career that a naked pussy was one of the most sensual things for a man used to seeing hair between a woman’s legs, and she was sure Doc would be no exception. Hell, she might even shave Georgia herself…another fun thought. By the time she pulled the car out of the driveway, she was as excited as she’d been in months.

Doc and Georgia were both nervous as a pair of virgins on their wedding night. The kids were on weekend excursions for school now that summer vacation was over; they went to Portland for concerts and plays, so they wouldn’t be home for two days. They told the kids they were closing the restaurant for the weekend and taking a leisurely trip down into the redwoods. All bases were covered but for their own apprehensions.

They were nearly to Larry’s house when Georgia turned to ask him, “Honey, do you feel like I’ve forced you to do this? We can still turn back if you want, and I’ll understand.”

“Getting cold feet, sweetheart? Well, I hope not, because I’m looking forward to seeing you naked with Sahara. I have been picturing this since the other night when we agreed we wanted to do it, but if you don’t want to go through with it, it’s okay. But we’re here now, so it’s now or never.”

They moved together and kissed deeply. He opened the door, helped her out, and walked onto the porch. Caroline’s car was still warm, so they knew Sahara was inside. He rapped lightly, and then opened the door. The house was lit only with candlelight in every room. Sahara had set the scene as seductively as she could. Three glasses of wine waited, and soft music came from the phonograph in the dining room.

Slowly, with the light behind her, Sahara moved toward them. She wore a gown of white lace so sheer it left little to the imagination, which suited Doc just fine. She moved first to Doc to kiss him gently on the lips, almost matronly. She moved to Georgia and took her face in her hands, opening her mouth to push her tongue between Georgia’s lips. She heard Georgia’s response, as did Doc.

Sahara continued to kiss Georgia deeply as she removed first Georgia’s blouse and then her slacks. She caught Doc’s eye and indicated he should help her undress his wife. As in a trance, he moved to slip the trousers from her legs, shoes from her feet, and then her panties. He arose to unfasten her bra, sliding his hand under it to cup her breasts. He could feel her nipples and knew she was excited. His penis felt the excitement, too, but failed to enlarge, as he knew it wouldn’t.

He was, at the moment, satisfied to watch the talented prostitute seduce his wife. Sahara began to suckle the hard nipples surrounded by tight dimples of her aureole. She pulled Doc to her, kissing him deeply this time, and then moving him to share in the feast of Georgia’s swollen breasts. She dropped to her knees, first to unfasten Doc’s pants and kiss his hard stomach. She let her tongue run from his waist to his belly and then lower, as she opened his underwear so she could take his flaccid penis in his mouth. Embarrassed, he tried to move away, but she held him firm. She licked Georgia’s stomach too and then rose.

“Come, let’s go into the bedroom. It’s time, I think, to give Doc his new toy. Now take off all your clothes.” 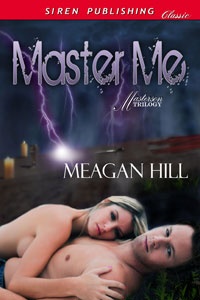