Sealed with a Kiss

On her wedding night, Amelie is betrayed in the worst possible way when her husband poisons her, leaves her for dead and beds her best friend before tossing her over the side of their luxury cruise liner into the icy seas below.

Near death, Amelie is discovered by a band of sea lions who transform her into a mermaid, a siren of the sea, in order to save her life.

In her new glory, she develops an unlikely love bond with a seal. The only problem is she is still haunted by the lovemaking from her unfaithful husband and in her current form, she can never consummate her relationship with her new love.

Will magic and love prevail to allow these unlikely bedfellows to mate for life? And will this lusty siren enact revenge on those who wronged her long ago? 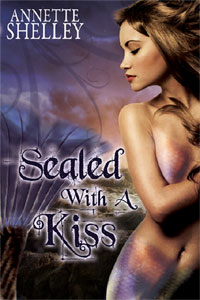 Sealed with a Kiss

He approached her, holding himself in his hand, his manhood in his palm.

She gasped, afraid of his size. She kept her legs shut tight, hoping he would continue being gentle with her.

"Don't worry, darling." Cassius slowly opened her thighs and moved his fingers to her opening. He moaned and seemed pleased to find her wet.

His body and touch excited her. She had run the moment over in her mind many times before today wondering, what it would be like. Nobody had ever rested between her thighs.

"Fresh, delicate, unused. So desirable," Cassius dipped his finger deeper into her, probing, stretching, opening. "And tight." He licked her juices off the tip of his finger. "Delicious."

He held himself up on a strong forearm and slipped his erection between the outer edges of her, waiting to plunge deep into her recesses and make her his wife in the flesh. "Relax." He kissed her mouth and slid his eager lips down her neck. "It's okay."

The feel of him on her, the smell of his hot body, enticed her in ways she never knew possible. Cassius awakened a deep and dormant feeling she never knew existed. "I know."

"Trust me." He held himself and ran his tip over her opening.

She gasped when he entered her and held her breath as the initial pain soon gave way to faint pleasure. "Oh, Cassius."

He spread her legs wider with his hands, reached a strong hand around to support her back, lifting her to him. "My God, you are sweet."

Instinctively, she grabbed him with inner muscles she didn't know she had. It made things more difficult. Slowly, she released her hold on him and gave in to the feeling of each stroke of pleasure he offered.

He felt better than she'd imagined, and with each stroke, she knew she would enjoy being his wife, not only in mind, but in body as well.

Cassius ran his hand down her back to her buttock, squeezing and pushing her body into an arch to deepen the sensation. "That's it. Relax." He went deeper and grew larger.

He increased the sensations deep within her and soon sent shockwaves through her system that seemed to come from a bottomless well inside her being. His slightest movement he suddenly made her clench him tighter and tighter until she felt herself pulsating and pounding into a state of pure ecstasy.

Cassius closed his eyes and pumped quicker inside her.

Amelie felt him expand further in her, until he pulsed, pounded and moaned in apparent sheer pleasure.

He finished faster than she thought he would. After he pulled out, a tiny spot of blood stained the sheets, marking his territory with her. She belonged to him now. He'd seen to that and the blood only made the bond that much stronger.

"Some wine my love?" Cassius jumped up, his body speckled with beads of sweat as he ran a hand through his thick black hair, smiling at her with perfect teeth.

His Greek origins, olive complexion and strong jaw line made him the most handsome man she'd ever seen.

"Oh…I don't know," Amelie said quietly, wishing he would come back to bed, but unwilling to tell him so.

Cassius's strong and willful nature had made him impossible to refuse. Prior to their marriage, he chased her like a rabbit in the forest. Now that he'd succeeded in capturing her, he left her side quicker than she would have liked. She couldn't understand it.

Cassius did not take no for an answer. "Here you go." He handed her the wine. "Go on, drink it. It's good for you."

"Aren't you going to have any?" She noticed his empty hand and vaguely recalled drinking some champagne outside the reception hall. Had it make her sleepy? She shouldn't have anymore. She didn't want to forget anything about her time with him.

Cassius insisted. "No, no, my love. It's for you. Drink this glass now, darling."

Amelie drank. She didn't like the bitter taste and put the glass aside. "That's enough for now, thank you."

Cassius picked it up, filled it again and handed it back to her. "Another, my dear. I insist."

"But why?" Did he want to celebrate the claiming of her virginity? She put out her hand to refuse. "I don't need anymore."

Amelie saw the rage in his eyes. Never seeing him quite like this before, she decided to follow orders. She never wanted to give him cause for anger, so she picked up the glass, drank it down. "Mmmm. Tasty, thank you."

He studied her and ran his eyes over her face, her hair, her hands.

Within a moment, she felt dizzy and exhausted. What's come over me? Before she finished the thought, her world went black.

Bound at the Ball (MF)
Lea Barrymire
In Shelf
$5.50
Tweets by
sirenbookstrand