by Stacy A. Moran, Ashley Nemer

A series published in Volumes... Over a thousand years ago one act of kindness set into play a fate that would be the down fall of Sekhmet.

Present day,two sisters hold the key to unleash a wrath unlike anything the world has ever seen before. 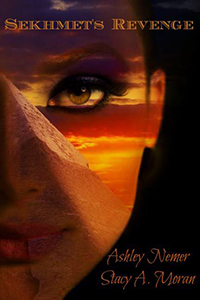 by Stacy A. Moran, Ashley Nemer

Sekhmet's Revenge Volume 1 through 4
Stacy A. Moran, Ashley Nemer
In Shelf
$2.99
All Books In Cart
All Books In Bookshelf
Excerpt

They walked into the temple and sat towards the back watching each of the individuals praying to their Goddess. It wasn’t until the last one left that Khait stood and took his daughter’s hand and walked her up towards the tall lioness-woman statue at the front of the alter. He had spent his life serving her and he knew that she would not give him anything that was not for the sole purpose of his family’s successful completion of their quest.
“Kneel before her, Nithe.”
With a weakness in her knees, she felt small and meek standing before Sekhmet, but with her father’s help she knelt down and instinctively lowered her head in reverence.
“My Goddess, I present to you my daughter, who is with child thanks to your gift. I ask that you bless her and the life force inside of her. For they are the future of your salvation.”
Candles were lit along the entire temple room and all at once they seemed to begin dancing. Shadows were cast in different direction all throughout the room. The wind began to swirl and a force like no other suddenly blew all of the candles out at one time. A loud roar from behind them startled Nithe, but Khait knew it was nothing to cause alarm.
They both turned around and saw a magnificent beast walking towards them. Instantly Nithe recognized the creature and stood, still maintaining physical contact with her father. She felt better knowing he could see the beast, too, and that this was not a figment of her imagination.
“Khait, my friend, it has been too long since I’ve seen you here.” The voice came from everywhere, the temple echoed with the sound of the one true love he had before his adulthood began.
“I have been busy, my Goddess, please forgive me.”
Khait’s body never wavered; he held his position strong and solid. He knew there was nothing to fear inside of this place. His daughter’s hand was trembling and he realized he had not introduced them in person before and that her first contact in this temple must have been terrifying.
“You have raised a cub of your own that you protect. She is ready to carry on our mission, Khait. Have you told her everything yet?”
The lion began to circle the two of them, the girth of his distance wide, but still within a lethal range.
“I have instructed her in the ways of fighting, and as much as I could, with our ways and our purposes. But my hands are tied, my Goddess, you know this.”
“She is a strong cub, much like you. I could feel her strength radiating the night she spilled blood on my floor. She became worthy of our cause at that moment.”
“I’m not a fighter, Papa.”
Nithe’s voice was low, she tried to hide her fear and disagreement from Sekhmet but that was not possible.
“Silence, child, you will do what your father has promised me the year of your birth and you shall not argue. I have sent you Asim and I shall give you weapons.”