Despite being married for several years, and loving her husband with all her heart, Sophia is looking for something more--the Big O. But her deep-seated shyness has made that search all but impossible.

Can Dr. Marianne Haley show the inhibited Sophia the way to bliss? Can she guide Sophia to take what she needs, to both her and her husband's pleasure? 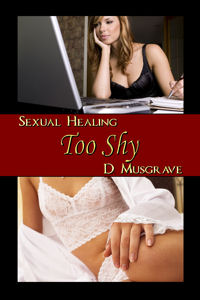 Marianne watched Jean and Michael walk hand-in-hand across the parking lot. She felt an enormous sense of pride for helping the couple discover their shared sexuality. But more than that, she was proud of them for taking the risky leap and trying something they’d only fantasized about.

After locking the front door, she turned off the lights in the foyer on her way through her office into the Suite. She straightened the room and put clean linens on the bed for the next session.

Her thoughts went to Sophia. She would likely be the next patient to visit the Suite. The image that came to Marianne’s mind was the same one she’d had since it became clear why the woman was unable to climax. A big reason for her block revolved around her deep-seated shyness about her body; she was unable to relax and let herself go.

Marianne looked at the pile of pillows on the bed and imagined Sophia lying back against them, completely naked, her knees in the air and her fingers exploring her pink pussy lips. She knew for Sophia to reach that level of comfort, she’d need a lot more than just a booklet with pictures. Marianne had to show her it was safe and healthy to give herself pleasure. Sophia had to be pushed to the next step. If she waited for the woman to be ready, it might never happen.

Closing the door to the Suite, Marianne left the room and went to her office. Her attention was drawn to the light flashing on the message waiting button on her office phone.

As she expected, it was Tony, her boyfriend of six months. He was checking in to see when she was coming home. She grinned because she knew he wanted to know when she’d be home so he could have dinner ready for her.

They’d met in Dallas. She’d been there for a symposium on advanced sex therapy. He had a booth in the guitar show the next building over. Looking back, it seemed like a huge stroke of luck that her colleagues had literally dragged her to the music show on the last night of both conferences. Little did she know that she’d not only meet Tony, but that he was from her home town. They hit it off so quickly and were so compatible in so many ways, there was no other way for her to describe it other than destiny. He liked saying that they had a resonance like a finely tuned instrument matched with a supremely talented musician. She liked that.

She listened to his smooth, husky voice on her machine twice. The second time because she was too lost in the sound of his voice to pay attention to what he’d said. His last line made her chuckle. “Don’t make me wait too long. I might have to start without you.” He meant eating dinner, but she pictured him naked, hard and pleasuring himself on their bed as she stood in the doorway watching his fist slide up and down his thick shaft.

The phone buzzed twice before Tony answered breathless. That only added to the mental images coursing through her mind. “Hey, babe. It’s Mary.”

“Good.” Marianne smiled as she shook her head. She remembered the first time he’d called her that. She thought he’d called her his huckleberry, but found out it was a vital part of an electric guitar, and to him, she made him work. It was corny, but it was their private endearment. “I’m just about ready to leave the office. Is there anything I need to pick up on the way home?”

“Maybe a bottle of wine. I made lasagna and breadsticks with Cesar salad.”

Not only was he great with his hands, but he was a good cook too.

“Sounds divine. I’ll grab a bottle of Merlot and be home in about twenty minutes.”