In a last ditch effort to save their marriage, Laura drags her husband, Rick, to a couples workshop.But Laura gets a little more than she bargained for when the workshop leader proposes a rather unorthodox experiment, leaving her helpless to her husband’s whims. She finds herself wondering, will her man be a caveman or a gentleman—and which one does she really want him to be?

"Ms. Kitt did a great job with this story. She keeps you interested and wanting to know if everything will work out or not."

"Selena Kitt has crafted an engaging story with characters that you can root for and bond with…The Flintstone Experiment is the perfect novella for those of us who asked, "What happens after the prince and princess rode off into the sunset?"

I'll Be Your Superman
Selena Kitt
In Shelf
$2.99

“What are you doing?” Rick asked from the bed as she picked up a banana and started to peel it.

Oh, hell. She put it back down with a frown, her hands actually shaking with hunger now. When she turned to him, she saw that he was naked from the waist down, his white button-down shirt undone at the collar, his tie tossed over his pants on the chair. The shock must have shown on her face, because he chuckled.

She came to sit next to him on the bed, handing over the yellow fruit with a wistful sigh. He took it and laid it on the other side of him, leaning back on a pillow and looking at her.

“One of the things that I’ve always loved about you…” He stroked the hand that she was using to prop herself up. “Is how proud you are. So proud of yourself—and proud of me.”

She smiled at him, wrinkling her nose.

“But sometimes I think it gets in the way…” He circled her wrist with his finger and thumb. She had small wrists and delicate hands. “Don’t you?”

She sighed and nodded. Her eyes skipped over him to the banana, her stomach growling loudly now. It was loud enough that they could both hear it.

“I know you’re hungry,” he said, acknowledging that he had heard the noise emanating from her middle. “And I’m going to feed you, if you’re a good girl.”

Her eyes snapped up to meet his, blazing at him.

“There it is. That’s what I’m talking about.” He nodded, still smiling. “I think it’s time you swallowed some of that pride.”

“Here.” He pulled up his shirt tails, and held his cock, which flopped limply over his fingers. “Suck.”

She stared at him, open-mouthed. What? No way! She shook her head, her mouth set in an angry, thin line, glaring at him.

“Yes.” He sat up enough that he could grasp her by the hair, pulling her toward his crotch. She could have resisted, but it would have hurt her to jerk away. “Sometimes you don’t know what’s good for you. Trust that I do.”

Looking at the banana on the other side of his hip, she took his flaccid length into her mouth. She’d been doing this, or some variation of this, to him for ten years and she knew exactly how to get him hard. Her tongue worked back and forth over the frenulum as she made a circle with her thumb and forefinger around him. When his cock began to swell, she started taking him in from base to tip in long, cheek-hollowing sucks, doing it again and again until he was fully erect.

“Look at me.” He moved her hair out of her eyes. She didn’t take his cock out of her mouth, she just tilted her eyes up to him. “I love you. Do you know that?”

She pulled her head off his cock, opening and then closing her mouth.

“Just nod, yes or no.” He smiled, sliding her head back down onto him.

Laura could feel her throat beginning to close with tears. She nodded, feeling his cock pulsing against her tongue. She had heard the words a thousand times from him, but this was different somehow. Something had changed, and she didn’t know what it was.

“Do you love me?” He caught one of her tears with his thumb as it fell. She nodded again, unable to stop the tears. She had never felt it so fully and completely as she did right now. He nodded, watching her tears falling.

“Suck.” He pressed his hand against the back of her head. She took him into her mouth again, as far as she could. She had never been very good at deep-throating him—Rick wasn’t a small man, anywhere—but she tried, gagging a little, and it made her eyes water until she wasn’t sure why tears were running down her cheeks.

“Deeper,” he said, and she could feel him pressing in. Her throat constricted and she choked, gasping for breath.

She found that when she relaxed her throat muscles, she could take much more of him, so she did, breathing through her nose as he thrust slowly in and out of her mouth. The longer she sucked him, the more open her throat seemed to become. When she looked up into his eyes, she felt completely connected to him, as if the cock in her mouth completed a circuit between them.

“Ok.” He eased his cock out of her mouth. The empty feeling she had when he took it away surprised her. His thumb was wiping at her wet cheek again.

“Hungry?” he asked. She nodded, eager, and he smiled, reaching for the banana. He peeled it back a quarter of the way and offered it to her. She took a bite, moaning as she mashed the sweetness against the roof of her mouth. Her throat felt raw and tender as she swallowed.

“More?” he asked. She nodded and opened her mouth. He fed her another short length, and she moaned again as she swallowed it, her stomach clamoring. A banana had never tasted so good. She opened her mouth once more, waiting as he peeled it further, feeding her bit by glorious bit. 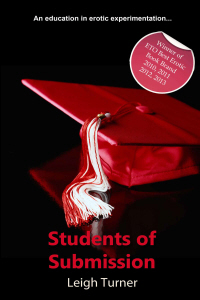 Students of Submission
Leigh Turner
In Shelf
$4.99
Tweets by
sirenbookstrand