For nearly a hundred years, the city of Sarenn has suffered under the Malediction, a curse that has cut the city off from the world and brought the dead back each night to haunt the streets. The common folk live in fear and poverty while nobles seek escape in the theater. The young Lord Ilyen Nessiryn has chosen to seek oblivion in pleasure and dark magic, but when one of his rituals backfires, he diverts the resulting curse onto his lover, the coquettish actor Miri Kesprit. When Miri awakes as a night-walking, blood-drinking vrko, he at first embraces it as simply another role. But the night holds dangers for him as well, and for the young deadkiller who has pledged to hunt the undead children of the Malediction and bring them to a permanent rest. And the greatest danger of all might be the love that grows between them. 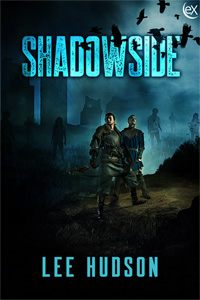 Tai Jerrik ran swiftly and silently through the darkening streets of Quicken, his black hooded cloak obscuring his slim form. He was stooped slightly, one hand curled round the steel weapon hooked to his belt’s left side. A black kerchief was secured over his face, hiding every part of it but his eyes, which were focused on the alley before him. Even in the darkness, he was able to pick out the signs he was looking for. A trash-barrel had been recently overturned, the bottle that had rolled from it carelessly crushed by someone who worried neither about damage to shoe-leather or naked soles. Most of all, Jerrik was attentive to a certain scent, a sweetish taint of corruption that rose above the alley’s stench.

The streets were empty, but that did not concern Tai Jerrik. He was a Yamari deadkiller, and he was on the hunt.

Once this district had been a middlingly prosperous neighborhood of shops and small merchants, the Malediction had changed that. Now Quicken was just another half-deserted slum, its warehouses and buildings tightly shuttered, the doors barricaded as soon as night fell. On the few occasions he glanced up, Jerrik caught snatches of movement behind those few windows hidden by curtains instead of boards and nails. Drawn faces peered down at him, then quickly disappeared. The people of Quicken would praise his name and the names of his brothers by daylight, just as they had sought him out for his services when the sun was high in the sky…but he knew they would not come to his aid tonight if he met with trouble.

Nor could he blame them for that. These people had families to look after and little enough help. It was not their place to risk their own lives for his. They had not taken the oath he had.

Jerrik slowed his pace as he approached the end of the alley. It opened onto a stone wall, forcing him to turn right or left. Running in either direction with no clear view of what he was running towards would be a bad idea, he knew. At the alley’s mouth, he glanced quickly to the left, then started and ducked neatly into a doorway, carefully peering round the edge.

A lone figure was shuffling down the street, lit by nothing but a splash of moonlight. The dim illumination showed the figure to be naked, the pale skin streaked with mud and filth. From behind, it was difficult to tell the figure’s sex. It was tall and narrow of build, with long dark hair, moving with a swaying, uncoordinated motion. There seemed little danger that it might perceive him. It moved like someone walking in a dream. Jerrik stepped from the doorway, keeping to the shadows as he followed the dead.

Several folks from Quicken had sought out the Yamari that day and advised them a dead had taken up residence in the district. Jerrik had taken on the job, being familiar with Quicken. He had hoped to find where the dead had been nesting and dispatch it before night fell but without success.

Normally newly-risen walkers moved aimlessly throughout the city, roaming from the Khadysarni river and Brokenwall up to the very borders of Richtown and back down again, always moving after dark. The combined efforts of the three deadkiller clans had been able to control their population…but a dead that selected a particular neighborhood to go to ground in meant a special kind of trouble. Very often they had been risen by a magicker, using the Malediction for some obscure agenda of their own. Others might retain vague memories of their former lives, which made them more resolute and difficult to deal with. Almost nothing was known of the mechanism by which the Malediction raised the dead or their nature. All that was known was that they were murderous and unthinking.

The simplest method of dealing with them was simply to kill them a second time.

Jerrik unhooked his shekk from his belt and hefted its weight in his hand. The weapon was curiously wrought, designed to fly whirling from the thrower’s hand and eventually return. Along its journey its spinning, razor-sharp edges could do considerable damage. A skilled shekksman could decapitate two or more deads with one throw. Jerrik’s abilities were not quite up to that level, but they didn’t need to be. Not this time. He could certainly eliminate a single creature.

There were many stories among the deadkillers about the weapon’s origins, each clan claiming its own founder as the shekk’s originator. Jerrik had once heard that there were hunting peoples in the far southern regions with shekks of carved wood that could bring down the huge beasts that roamed their lands. But if those people still hunted their savage grasslands, or if any part of the world outside Sarenn still existed, none could say.

He walked carefully, timing his steps to match the dead’s shuffling gait so as to disguise his footsteps. When he was less than three yards away he called out to his quarry, a wordless shout that caused it to stumble to a sudden halt. It stood with its shoulders rising and falling slightly. If it were alive, Jerrik might have thought it was weeping.

“Victim of the Malediction,” Jerrik said, his voice ringing in the alley like a herald’s trumpet. “Born in light, now trapped in darkness, slave to the will of shadow…”

The killing speech, he had heard, had originally been quite a bit longer. There had been much concern, in the old days, that a dead might retain some memory of his past life. Jerrik could think of nothing more horrifying than the idea of being trapped, fully conscious but helpless, in a shell manipulated by forces outside himself. The speech, however droning, had been meant to reassure the dead that their humanity was at least acknowledged before the final blow was struck.