When Evelyn Sloan is summoned by her late husband’s solicitors, she expects to hear about money and property. But Edward loved his wife enough to leave an unusual codicil to his will, non-compliance with which will lose Evelyn the house and the money. While he lived, he had never been able to cure Evelyn of her superior, haughty manner and disregard for others, but his final bequest is a spanking at the hands of his driver and close friend, Connor Mackie – a man Evelyn regards as attractive, but a mere servant. Will a severe, humiliating spanking change her ways?

Working as the pianist in a late-night bar isn’t quite what Barb hoped to do for a living. She dreams of being a rock star, but dreams cost money. Then comes the night the bar owner’s son, Myron, makes her an offer she can’t refuse – $50 to look at her breasts. It’s the first step on an encounter that could be very rewarding – for both of them.

The Third Party by Sommer Marsden

Gil and Vivian need the money for a balloon payment. The money that’s been unexpectedly offered to them by a hush-hush sex club. And it has them considering the unthinkable. Or is it so unthinkable? Is there really any harm in an unseen gathering of strangers watching them have sex for money? An invisible third partner in on their marital coupling. Vivian learns that maybe, just maybe, she finds the whole idea of sex for show--and yes, for money--a bit more exhilarating than she’d expected.

It’s amateur try-out night at the strip club, and the girls who are auditioning are nothing special – until the stunningly sexy dancer in the ballet clothes and pointe shoes arrives. What follows is a demonstration of pure female submission and exposure at the hands of the dancer and her ruthlessly dominant partner.

Three’s the Charm by Elizabeth Coldwell

Everyone thinks Tina married Eddie for his money, but that’s not the case, which is why she’s so frustrated when their sex life dries up. When she discovers Eddie has fantasies he’s afraid to ask her to fulfil, they come to an arrangement that means he gets the kinky sex he craves and Tina gets a little something special in return … 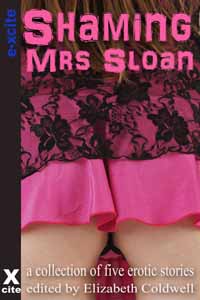 Her full, womanly bottom was thrust out, the buttocks spread and rounded, stretching the black silk of her knickers and showing the soft pink flesh as though through a dark, hazy mist. Above the stocking tops her thighs looked softly vulnerable in the light from the single lamp. The black heels added a final touch of incongruity.

‘It’s going to get even more obscene,’ Connor said, ‘trust me.’

He placed a splayed hand on her left buttock and she flinched at the feel of his fingers on her sensitive skin. ‘Don’t move,’ he breathed, his voice sounding suddenly ragged with desire. She felt the big hand move across her knickers to the central groove of her bottom and pause.

‘I want you right over,’ he said harshly. ‘Lift your arse up.’

With that, his big blunt fingers were thrust right into her arse crack. Evelyn gasped in humiliated dismay as he said, ‘Lift up higher!’

She felt the pressure of his grip on her bottom tighten and fingers pushing on her anus as he urged her further over the chair backs. Only when she was arranged to his satisfaction did he release her.

‘I hope you enjoyed that,’ she breathed, her cheeks ablaze with indignation.

He looked around her bent body, at the upturned face glaring back at him, and said, ‘I see that made you blush, my lady. Well, let’s see how much of a blush I can put on your nether cheeks.’

Without warning, he threw a hard slap across both bottom cheeks, making them pancake and then wobble delightfully. Delightful to Connor, that is, as Evelyn yelped at the sudden assault.

‘That hurts!’ she gasped.

‘That’s nothing,’ he answered, beginning a barrage of hard smacks across the seat of her flimsy knickers. Evelyn’s buttocks jumped and juddered under a series of sharp impacts and her breath escaped in short, shocked exhalations. When he paused at last, he could see the rosy stain on her buttocks through the dark mist of the knickers.

Fighting for breath, Evelyn spluttered out a desperate, ‘All right, that’s enough! I’ve taken a spanking, so that’s it. Let me up!’ She placed her hands flat on the seat and tried to push upwards, but then she felt Connor’s hand on her lower back, holding her down.

‘Oh no, not by a long shot have you taken your full punishment. That was just intended to warm you up. The real punishment starts now, once I have your knickers down, my lady.’

As his fingers crept under the waistband and pulled on the elastic she cried, ‘No! You can’t do this! You can’t strip me like this! Please!’

‘You need to be completely shamed for your behaviour,’ Connor told her. ‘Both Edward and I agreed on a full spanking punishment, and that means with your arse completely bare.’

The flimsy silk whispered across enflamed skin as he lowered the knickers to her upper thighs. Aware of more movement back there, she asked what he was doing.

‘Turning your knickers inside out and draping them nicely.’ He stood back. ‘That’s quite a picture. How does that feel, my lady? A mature, superior and very haughty woman like yourself, to be bending over those chairs with your knickers down around your thighs and your intimate parts on display – are you feeling properly shamed yet?’

Evelyn didn’t answer, but the answer was apparent in the deep red flush on her face.

He can see my bare bottom, my arsehole – her bottom twitched involuntarily, trying to hide the shameful exposure – between my legs – she tried to close her thighs, but her position made it impossible – he can see everything!

Then he began to spank her again. The hard smacks, delivered with the full force of his large hand, were even more painful on her naked flesh. Her buttocks churned under the ferocious assault, jumped and juddered as though possessed of independent life, divorced from Evelyn’s will as she realised that her frantic gyrations were revealing even more of her intimate parts. 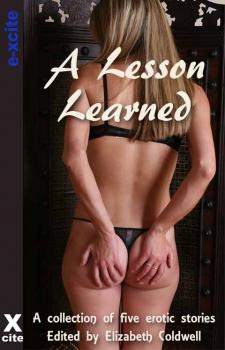