Karen Cartwright is tasked with the thankless job of substitute teaching for an unruly bunch of high school seniors, she never expects to be called into the principal’s office because of her work.

Sheikh Aziz heard great things about the wonderful Karen, but now he sees she has much more going for her than her brains alone.

When Karen accepts a full-time teaching position, the last thing she expects is a marriage proposal.

Azi has problems of his own. Immigration wants his visa straightened out before the end of the school year and without the proper documents, he’ll be sent back to Turkey.

Can he convince the woman of his dreams to help him out in the classroom, the bedroom and in life, or will he be sent home forever? 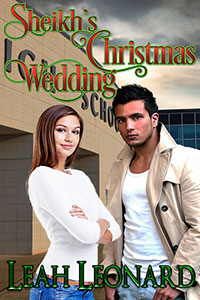 Two weeks before Christmas, Karen Cartwright stood at the front of the senior high school history class she was subbing for and asked the students a simple question, “What is the meaning of the season?”

Nobody moved a muscle or raised a hand.

Teaching was supposed to be so rewarding, or so she’d been told. Trying to impart a little knowledge to a group of know-it-all seniors was often more than she bargained for.

“Look, guys,” she cringed the moment she said that knowing people were so politically correct these days, adding, “and girls…I know the holiday break is coming up in two days, but I still expect you to try. Got it?”

A couple of students sighed. Another pulled out a cell and appeared to be sending a text.

“I said enough!” She smacked her hand on her desk.

Everybody stopped their slouching and a few even woke up.

“I apologize for that, but I want all of you to put away your phones, stop your distractions, and listen. Just listen, and be present for once. Christmas is coming, Hanukkah, Ramadan…whatever celebration your family believes in. What you call it doesn’t really matter. I believe people are people. We all have some commonalities regardless of our different belief systems, and all I want to know is what that means to you besides posting turkey pictures on your Instagram account and eating too much. Please. Enlighten us all.”

One of the major slouches from the back of the room raised his hand, even though his lanky body was still leaned all the way back in his seat, and he looked like he had tranquilizers for breakfast.

“Yes, in the back.” Karen pointed to him.

“Thanks, Todd. Would you be willing to expand on that any?”

Todd rolled his eyes. “You know, Unity, like togetherness, beingness, oneness. Peace love and rock n roll. All of that.”

Karen tried to keep it together. She was scheduled to sub for this class for the remainder of this week and part of the next until the twenty-third. She hoped she had the patience.

Just then, she heard a knock on her classroom door. A gorgeous gentleman with thick black hair, a cocoa complexion, and blazing black eyes walked into the classroom wearing a slick suit. “Pardon me, Miss.”

“When the bell rings, might I have a word with you?” the man asked.

You can have more than a word. “Sure.”

“Thank you,” he smiled. “I shall be in the principal’s office down the hall.”

“All right, thank you.” Karen felt a wave of heat rise up from her center and flush her face. Her legs wobbled, and she had to steady herself by leaning against the desk. Geez. I hope none of the students noticed.

She had no need to worry about a millennial noticing anything, especially not a thirty-one-year-old teacher. In the amount of time that little exchange took, the whole class had their cells out and some were chit chatting to each other.