Once a cougar gets her claws into him, his only choice is to run like hell or submit to her unfathomable dominance. Her pleasure will become his only reason for existing. Silver adds a new dimension to the game by forcing the cub to grow up. She can’t stand an immature boy who doesn’t know how to please his woman. She’s a sadistic, selfish and manipulative lady.

Edith, by contrast, has a boring life. Since a recent breakup she’s been struggling to pay her bills. In the hope of earning a bit extra, she advertises her typing skills. Silver calls her—and in typical fashion demands far more than Edith is willing to give. Silver wants Edith to ghost-write a book about her exploits with her cub. She pays well. Reluctantly, Edith agrees. And so begins her education in things she’d rather not even think about.

Perhaps Edith’s innocence rubs off on Silver, because she starts to realise her cub is a one-in-a million kind of guy. She wants to let her guard down and love him the way he’s always loved her. But is it too late for that? Silver’s passion rushes to its shocking climax… and Edith’s love for her own partner is tested by Silver’s gorgeous cub. 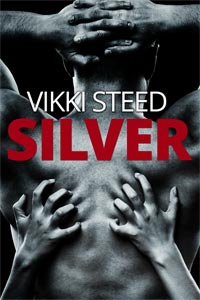 I was lying on my bed in a state of relaxation, half asleep. It was one of those evenings where you wish you hadn’t lain down before doing the bathroom routine. Now I’d need to get up again to go and brush my teeth.

Sleepily, I played with my gold necklace. Andrew had given it to me not long before our breakup, and I thought of him whenever I wore it. Perhaps I should stop wearing it. The breakup had been months ago. Andrew was no longer part of my life, and I wouldn’t take him back even if he came begging.

But I liked the chain—it was pretty. My fingers fondled the little apple pendant. Andrew had teased me when he’d given me the necklace, saying that the apple symbolised the wickedness of all women, and me especially. He’d said that women born in Johannesburg—or for that matter, anywhere in South Africa, not to mention Africa in general—were particularly evil. Wicked, he’d said, just wicked. At first I’d thought he was joking, but later I began to think he really meant it. He’d sure treated me as if I was bad and didn’t deserve better.

My phone rang. I startled. Nobody ever called me at this time of night, not even my parents. I picked it up, and the screen showed an unfamiliar number. I answered with a cautious, “Hello?”

“Hello,” a woman’s voice replied. “Is that Edith?”

“I’m phoning about the typing.” The woman sounded middle-aged, and she had a faint European accent. I lay back against the pillows and closed my eyes again.

“I’m looking for someone to help me write a book,” she said.

“Your advert said you do typing for an hourly fee.”

“What’s the difference between a typist and a writer?” the caller asked.

I laughed. “Are you serious?”

“Well, to me there’s not much difference,” she said. “I can barely type, and I’m no good at writing either. But I need to write a book.”

“I can’t help you, I’m sorry,” I said. “My advert is for typing.” I stood and headed for the bathroom, because I was wide awake now. I wanted to brush my teeth and then tumble into bed and go to sleep and forget about this strange caller.

“Can’t you put a few words together?” She actually had the cheek to sound annoyed.

“Hey, my advert was for typing,” I repeated, even more annoyed.

“Can’t you write a sentence?”

“Of course I can write a sentence.”

“Hell no, it’s not fine,” I replied. “I can write a sentence, but not a whole damn book. What you need is a ghost-writer. Why don’t you do a Google search and see if you can find other adverts? I’m just a secretary. I type stuff that other people have written.”

“I can’t do a Google search. I don’t have a computer.”

She had to be kidding. Clearly, this was one crazy lady. I’d put out online adverts only, so if she didn’t have a computer she must have used someone else’s. Anyway, I was more interested in my toothbrush than her stupid book. I’d been trying to get the toothpaste onto the toothbrush with one hand, but it was impossible. I wanted to get done in the bathroom and go back to bed.

I stared at my face in the mirror, peering into the centres of my dark blue eyes, which had won me many compliments. I gazed critically at the dark rings under my eyes—I looked as tired as I felt. My brown hair was rumpled, and I looked a bit of a mess. I grabbed some cotton wool and removed the last streaks of eye-liner still visible beneath my eyes.

“No, I’m not like a secretary, I am a secretary,” I replied. “Why don’t you buy an electronic recorder? Maybe then I can help you. You can talk into the recorder and then I’ll type it up.”

I sensed she was testing me in a playful but nasty way. There was something not right about her. She didn’t sound stupid. It was as if she was trying to tell me that she was very, very old. Dictaphones had not been around for years.

“I thought a secretary could type from a Dictaphone.”

“Do you have a Dictaphone, Silver?”

I sighed. “It’s not called that anymore, anyway,” I told her. “Dictaphones have gone to live with the dinosaurs. People do voice recordings these days, on electronic devices.”

“Cool,” she said in a light-hearted tone. “Whatever. Can you do it for me?”

“Can I do what?” I felt tired. We seemed to have been on the phone for hours, though it was just a few minutes. Some people take more energy than others, like this person called Silver who’d phoned at ten o’clock at night and didn’t even know what she wanted.

My advert had been running for a week, and she was the first person to call. Had that not been the case, I would’ve just rung off. But the truth was I was desperate for work. Since moving out of Andrew’s flat eight months earlier, I’d been spending my entire savings on rent, transport, and grocery bills.