When Sin Pointe webmaster, Benjamin Wright, is publicly humiliated on his birthday, he knows he’s never gonna be able to show his face around the guys again. But an angelic hostess who lets him sleep it off at the club seems surprisingly eager to help him out. Is his luck changing or does she just feel sorry for him?

Hazel Temple, bagel mistress by day and club hostess by night, feels horrible for inadvertently playing a part in Ben’s embarrassment and vows to make it up to him—by telling him they had a sizzling hot one-night stand. Still recovering from losing her fiancé to suicide, she worries about Ben when he discovers her lie. Is she bound to hurt the men she cares about?

A Sin Pointe camping trip provides Hazel her chance to get Ben’s groove back. Will her webmaster be the one to rock her world?

More From A Sin Pointe Novel

Finally, after finding out he seemed to be the only person there, he tossed the last paper towel he’d used to clean up his mess and plopped down on the toilet seat where he sat now. What he wasn’t prepared for was the note he found tucked into his shirt pocket. He patted it and pulled it out carefully.

He read it again.

Apparently he’d had relations with her, pretty good ones at that, but had no recollection of it. What was her name? He couldn’t remember but it started with an H according to the note. Crap. He’d had hot, amazing sex last night with her? With Haven?

He closed his eyes, and tried to remember more, considering dropping his pants and inspecting his stuff. He didn’t go that far but adjusted himself in his briefs, now conscious that he’d been inside a beautiful woman who he’d somehow brought some pretty decent pleasure to. More amazing than that, she hadn’t been turned off when she’d seen him. God, this was the weirdest feeling in the world.

But straining to remember more was no use. It only gave him a worse headache, not a name of the woman he’d slept with so carelessly. Or any remembrance of touching her. No way would he have not touched her. Ah, he did remember feeling something. He was an idiot. She’d sung him happy birthday, which would have been cool if he hadn’t just been crowned king of the losers by Erby. Wait, before that. The chorus of his favorite song as he’d sat there in silent chaos had touched him, even if he hadn’t let it show.

Somehow, after all that, he’d gotten close enough to kiss this other woman. Back on that well-meant futon. But how in the world did a guy like him end up hooking up with a woman like Haven?

She probably felt bad for him.

Story of my life, he thought.

Where was she now? Was she okay? They’d been in the office together. Which meant she could have seen him tossing his nachos. Surely she’d written the note and left in time to spare them both that lovely experience. And apparently, she was well. Better than well.

He shook his head, trying to understand last night. The problem was, his pride might be swelling on one hand but on the other, he felt like a huge ass wipe. He’d slept with a woman whose name he couldn’t remember and oh yeah, he didn’t do that kind of thing. It wasn’t anywhere in his nature. Jaxon and Stefan made women melt at the mere thought of the things those guys could do to them. Unless a chick was super into a personalized website or slick Facebook banner, Ben didn’t have much woo factor to offer. And a one-night-stand-to-blow-your-mind was definitely not on his menu. He wouldn’t have slept with Erby on their first date and he’d known her for six years! Okay, maybe he would have last night...

“I suck and ow,” he said, holding his head in one hand while his elbow dug into his knee. Closing his eyes, he tried to remember Haven’s hands on his legs, maybe playing with his knees. It was a hot fantasy, but he got nothing. “Great, just great,” he muttered and then stood up and flushed, even though he hadn’t even dropped his trousers.

It was time to make his way out.

But what if she was out there, waiting?

An apology. That’s what he owed her. A big ole I’m sorry. This woman might have been pleased with her experience but she should know he wasn’t that kind of guy.

As he dragged his reluctant feet from the stall, her kiss popped onto his lips. He remembered. She’d tasted like sweet cherries. He was so screwed. He knew he’d messed up and had no idea how to deal with this which meant avoidance until he figured it out. What would Jaxon do?

“You’re not Jaxon, dip wad. You’re Saint Benjamin,” he told himself as he swallowed, and followed the narrow hallway from the back office up to the café.

He needed some and if she was up there, he could invite her to have a cup with him. And maybe talk. Nerves brewed heavy in his stomach as he pushed open the curtains that divided the club from the café. Why in the world he chose that very moment to start worrying about condoms was beyond him. But he fumbled for his wallet and found the one he kept still tucked into his bill fold. 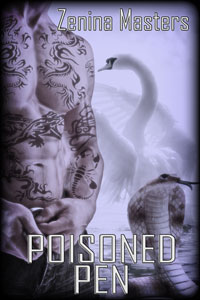