It is hard to believe that it’s been 25 years since the classic romance Sleepless in Seattle warmed the hearts of theatergoers. Best-selling M/M author Ryan Fields, gives us his unique reinterpretation of this classic theme with Sleepless in San Francisco.

When young Noah Richardson sends an email to the producers of the home renovation show Dream Away, he has no idea that the host of the show, Jonathan Haynes, will be intrigued and touched by his sad story. Noah, his recently-widowed father, and their black lab, Tucker, have relocated to San Francisco to start a fresh new life and heal their wounds. And their new house is in dire need of renovation.

Jonathan Haynes is desperate to find an interesting house to film for the show. So he gets on a plane and flies to San Francisco the day after he reads Noah's email. But Jonathan soon finds out that Noah's father, Ed doesn't know about Noah's email and he has to convince him to do the show. The fact that Ed and Jonathan wind up on the living room floor having passionate sex during their first meeting doesn't help.

Ed finally agrees to do the show. By the time construction begins, Ed and Jonathan can't get enough of each other. They start having secret encounters to satisfy their desires, never realizing they are building a solid relationship at the same time.

Then a series of events takes control of their lives and changes them all forever. Ed's not sure what to do. He's in love with Jonathan, and he can't get enough of Jonathan's body. But he feels guilty about starting a new relationship with anyone. So he wrestles with the conflict and begs for a sign to help him decide what to do, which leads to a surprise ending that none of them could have predicted. 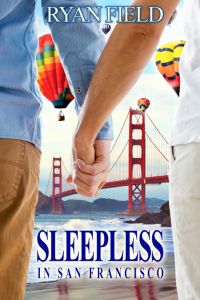