This is the story of a most unusual relationship; Fala the Slider Girl and Bartek her Watcher. No mere chance has brought them together, it is their destiny. Although neither knows it, theirs is a love as deep as the oceans and as enduring as Gaia, our earth which birthed and protects them. But the time is coming when Gaia will be threatened by a far greater power. To resist, Gaia will need their courage, and she will demand they both sacrifice their all, including each other. 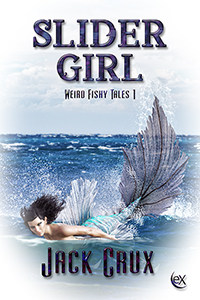 It wasn't his face that piqued her attention, although with its striking cheekbones, proud mouth, and strong nose, it was achingly beautiful. Neither was it his inky-black hair, unfashionably short. Not his slim angular body caught at the end of the long years of transition from boy to man, nor his perfectly shaped buttocks that begged to have a hand squeeze them. He was more than bonny, it was true.

All these things retained her interest but did not ensnare her gaze, did not capture her attention as surely as a hook through the lip of a fish.

It was his eyes…

There was nothing quite so depressing as an English seaside town, once the drunken day-trippers and fighting families had scuttled back to the cities for their winter. Fala mused as, answering the overpowering pull deep in her soul, she wandered through the insipid grey for most of the morning. As she walked, the wearying weight of her loss threatened to smother her like a rolling sea fog. Her dull, aching chasm of grief made it easy to ignore the tatty amusements desperately flashing their gaudy lights and playing infuriatingly catchy tunes at her through the murky mist, the frighteningly forlorn laughing policeman machine, cackling loud enough to penetrate the peace of any child's dreams, was one nightmare too many.

And yet Fala sensed more mundane fears roaming the deserted streets, so that the sense of desperation was palpable, the shopkeepers and businessmen losing all hope for a summer, now long gone, that had never delivered where it mattered, in their accounts. The town was tottering on the very edge of despair. All who could have, had already left the dirty streets for something better, and only the truly hopeless remained, flotsam washed ashore with no means of re-floating itself.

Periodically, as if to add to her despondency, the salty rain blown in from the sea threatened to engulf everything in large, smattering spots. Earlier, for a time the sun had managed to fight through the dense cloud to bring a shadowy ethereal light to proceedings and lift Fala’s mood but towards noon even it had given up as if the energy needed to keep the sepia gloom at bay was too much and it retreated, swallowed by the cloud as the dreary rain set in.

Fala was miserable and cold, far deeper than the marrow of her bones. The temperature did not touch her, never had. She did not fail to be invigorated by a swim in even the coldest ocean. It was the paucity of spirit that sapped her strength, threatened her purpose. Danger could be anywhere. Her enemies were ruthless and efficient, and they thrived on the thrill of the hunt. Failure and intense loneliness stalked her as she shunned all human contact and simply stood staring out from the pier, a solitary figure almost indistinguishable in the grey, lost to the pull of the ocean and the memories that haunted her.

Eventually, sodden and shivering, she allowed her feet to take her where they would, and she shuffled into the last cafe at the end of the pier. To her surprise, it smelt of warmth and safety in a way few places did, but such unexpected comfort caused the warning bell inside her to clang harshly.

Something was about to happen.

Accepting fate with the stoicism of one who had previously tried and failed to change it, she chose a table by the window, shook off her saturated jacket like a dog emerging from the water and sat down.

She ignored her internal alarm's continuing dull peal with a studied indifference that silenced both her dread and her expectation. The need for accompaniment and love were both directly at odds with the weary acceptance of what such a relationship would bring.

She had been alone for too long and she was as tired as death. She lacked the will to begin again.

And then she saw those eyes.

Every colour of the ocean swirled there, from the sparse chilly silver grey of the poles shrouded in ice and fog at the very edges of the world to the brilliant blue balmy warmth of the tropics.

Alluring and so dangerous.

Fala tried to look away, she really did, to reject the hope that rushed through her as those beautiful orbs held her glance challengingly, but she was already lost. Lost in their depth, their current and their colour, flowing, swirling, pulling her in like the most hazardous whirlpool in the deepest water.

They were stealing her breath, reaching into her chest and snatching hold of her heart, claiming it with the sheer unfounded audacity of a thief in the night. Even now, taking her old and broken spirit and infusing it with life, with youth and vigour, the promise was enough to send a flutter through her, borne on butterfly wings of expectation.

It was already too late.