Just as East and West prepare for a nuclear confrontation, a rogue scientist releases a deadly virus at every major airport in the world. While the virus decimates the global population, Russian tanks are poised to strike into Western Europe, but a giant solar flare, followed by a coronal mass ejection, destroys all electronic technology and communication on Earth. The northern hemisphere is plunged into another ice age. Yet, on a remote island in the South Pacific, life continues to thrive. Among the native population are westerners, each drawn to the island for different reasons, each with a part to play in the survival of not only the islanders, but the human race. 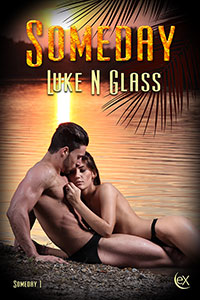 Tom and Huihana ascended the fragrant grassy slope of the hill that looked down on the sandy cove of the lagoon. They had many special places where they could be alone together. As they walked Tom picked a few wildflowers, which he reverently handed to her. A few steps from the track they ducked under a shrub onto a ledge covered with soft moss, high above the sea where the tangy breeze tugged at their hair. As they turned to face each other, Huihana, whose name means lily, stood on tiptoe to kiss her lover. She selected a delicate pink blossom and held it up to him. Tom clasped his hands around hers, kissed the flower, and took it from her fingers. They kicked off their fibre sandals, which was all they wore, and lay down together, totally naked.

This was the day they had decided to go all the way and make love, deeply, passionately, to its ecstatic conclusion. No more manual stimulation to satisfy each other’s sexual longings. This was the real, glorious union of flesh and spirit. Tom rested on his left forearm as he gently stroked Huihana’s ripe breasts and kissed her full lips, searching for her tongue with his own. His right hand glided slowly downward over her soft belly, over her dark curls, into the moist cleft he had stroked many times before. His fingers felt drawn to her heat, and they teased her moist opening. Her breathing grew faster, and when he touched her bud she moaned with lust and grasped Tom’s rigid manhood. Tom groaned and thought he might die of pleasure very soon. He moved to cover her body with his own. Huihana opened up for him, guiding him to her slippery entrance, feeling her need.

Tom pushed gently inside her, the tightness of her vagina gripping him, urging him deeper. Their bodies took over and they became one being, driven by the ancient rhythm of love. Huihana was whimpering, trembling. Tom felt himself reaching the point of no return. Hold on for her, hold on, oh…ooh… They climaxed together in a shuddering mutual orgasm, Huihana’s hips jerking upwards to meet Tom’s urgent thrusts. Then as the tide of their passion ebbed, they held each other close, feeling their hearts beat as one. Tom opened his eyes and saw Huihana’s gazing into his, tears of joy welling in the corners.

“We’ll be together forever. I’ll build us a house, and we’ll have lots of babies.” Tom rolled over and gazed up at the blue sky. “I’ll catch fish for us to eat and to swap for what we need.”

“I’ll grow vegetables, and herbs in a patch outside our house.” Then she frowned. “But we will make love every day, like this, won’t we?” Then she laughed and they rolled around together and hugged. They lay together, nuzzling, and tenderly caressing each other, wanting to make the feeling last. They sighed, slowly stood, and kissed again. Tom wrapped his arm protectively around his love before they walked down the hill together.

Old Man Flint watched them go from where he lay concealed behind a shrub. He hadn’t meant to spy on them. He had been walking down from his lookout point near the summit when he heard noises and moans coming from the hidden ledge. He stopped, listened, and suddenly realised what was happening. He felt embarrassed and was careful not to disturb the couple who he could not see, but soon knew who they were from their voices as they lay talking after making love. He felt moved by their honest emotions. He dared not make a sound, so he waited until they were out of sight before standing up to continue down the hill. As he stood up, he looked down and chuckled when he saw that he had an erection.

Flint had a routine every morning. After breakfast and his ablutions, he would walk from his cabin on the hill towards the summit and gaze out at the horizon. His route took him around in a complete circle so that he had a three hundred and sixty-degree view of the South Pacific Ocean. He wasn’t expecting to see anything other than the local fishing boats, or a rare visiting craft from the nearest faraway island, but he felt more secure with the knowledge that he had checked, just in case. The scenic walk would eventually bring him back to his cabin. He had stopped shaving years ago but kept his white hair and beard trimmed with scissors. He looked older than his fifty-two years, as his hair had gone white prematurely, and his lined eyes were like blue-grey steel. He was only five-foot eight, but his body was lithe and sinuous. He swam like a fish, and he could move like a cat when he was stalking a wild pig. 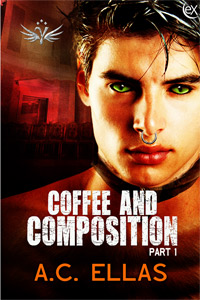 Coffee and Composition 1
A.C. Ellas
In Shelf
$4.99
Tweets by
sirenbookstrand