Sometimes Love is Not Enough

Years ago, Jeff Asher had a steamy affair with a fellow student in college. While on a tour promoting a book, Jeff comes face to face the result of that affair. Will his past and a long ago mistake destroy his marriage? 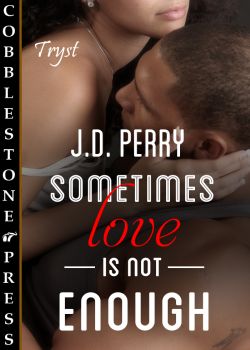 Sometimes Love is Not Enough

Forty-five years ago, when it started, we were just two college students in the same class—not even friends—at North Carolina Central University in Durham. I was a sophomore chemistry student enrolled in a physics class with a group of junior biology majors. On the first exam I made 98 and Joan scored a 68. Her GPA topped 3.9, and she wanted to go to medical school.

As we left class, after Mr. Jones had passed out the exam papers, she approached me. “Jeff. Is it possible for you to tutor me?” she asked with her cute little smile. My parents had named me Jeffery Leon Asher after my grandfather.

“Ah—yes,” I stuttered, looking into her beautiful eyes after trying to avoid eye contact but failing. My eyes were drawn to a mole on the right side of her nose, which accentuated her lovely face.

For a year and a half I’d seen her on campus. I knew she was dating a starting player on the football team, but most of the time I saw her walking the campus with a group of girls—all of them good looking and members of her sorority. Was she the prettiest girl on the campus containing two thousand other females? If not number one, she was surely number two or number three.

Joan Fairchild stood maybe five foot six with long black hair. The color of her hazel eyes depended on your angle of view. They could be slightly green or a kind of brown. Her breasts were large for her body type. She had a nice little round butt, which fitted tightly in a pair of blue jeans that she regularly wore with her pink and green sorority sweater.

“Can we get together after class or some nights in the library so you can explain some of the concepts I don’t understand?” she asked, touching my left arm.

“Sure,” I said, holding my books tightly, trying to prevent her from seeing my trembling hands. It wasn’t often that a beautiful girl knew my name.

At nineteen years of age girls were still a mystery to me. I had never had a girlfriend, even though there were several girls who liked me. I was the shy type and always had my head in a book. The few girls I had been with made the first move and sometimes the second move. It took me a little longer to decipher the meaning of each move.

In high school my virginity had stayed intact until Sherry Green. One day after class during my senior year she asked me to walk her home. We both lived only a short distance from the school. As we walked she told me how much she’d liked me since elementary school.

I was surprised. Sherry was a very popular girl in our high school.

“Do you want to do something?” she’d asked, standing at her front door.

“What?” I had no idea what she was talking about.

“My parents aren’t home. We can do whatever you want to do.” She opened the door and led me in.

I stood in the middle of the floor and debated whether to kiss her or leave.

“I think I better go home,” I muttered. My dick was hard, and my mind and heart were racing.

Sherry dropped her book bag and kissed me before pulling away. “Do you have a condom?” she asked, leading me to the bedroom.

“Sure,” I said, nervously searching for one of the three condoms I’d carried in my wallet since the first day of high school.

The first time was quick, but fifteen minutes later I was ready to try again. This time I lost track of time. We made love for the rest of the afternoon until the third condom was used.

As I walked home with a grin on my face my head was high and my chest had expanded several inches. I was now a man.

For the next few weeks I strolled around school with a lot of new found confidence. Sherry and I had sex several times before she started dating our starting quarterback for the football team. One day after school she waved at me as they drove off in his father’s new Ford Torino.

I had been told by several girls in our school that I was a nice looking guy but too short. I stood five foot eight and weighed 165 pounds, so I was too short for basketball and too small for football. Left with what I saw as no other option, I volunteered as the equipment manager for the basketball and football teams.

I should have known after Sherry that I was never going to be like the guys on the football team—the guys all the girls wanted. Realizing my success in life was to be found in some endeavor that wasn’t physical, I arrived on campus as a science major and fully committed to focusing my efforts on studying.

Rose Richardson wasn’t my girlfriend; we just happened to know each other because she was also a chemistry major. We did a lot of things together, including having sex every now and then. She had a sexy body and a pair of green eyes that lit up her face whenever she smiled.

One night we lay in her bed naked with her head on my chest. “You know everyone thinks you’re in love with her,” she said, caressing my recently hard dick.

“What?” I was in deep thought thinking about two reactions I’d missed on my organic chemistry exam earlier that day.

“That girl you’re tutoring. She has a boyfriend. And he’s on the football team.” Rose raised her head to look into my eyes.

“I know. I’m just her tutor.” The ‘everybody’ included my roommate and friends.

“If I had a camera, I would take a picture when you two are walking around campus together.”

I had no idea what she was talking about.

“Your tongue is dragging the ground when she’s around. She’s using you.” The tip of one of Rose’s fingers tapped on my hairless chest.

“To get a better grade,” I said, rubbing her cheek with my thumb.

I loved the look on Rose’s face after we had made love. Damp strands of hair hanging on her forehead. Beads of sweat tracing the top of her upper lip. Her cheeks smiling.

“No. To be her escort when her boyfriend isn’t around, which is a lot,” Rose said, interrupting my focusing on her face.

“Come on,” I said not wanting to hear any more. I knew she was partially right.

“I’m not complaining,” Rose said. “Because the more time you spend with her the more we’re having sex.”

That was a trend I’d noticed too.