Detective Brin is sent to a sparsely populated moon called Haid to capture Eyhan. All three of its small town police departments are understaffed. 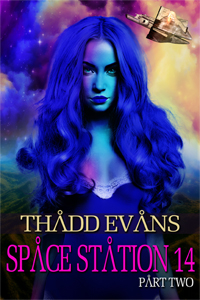 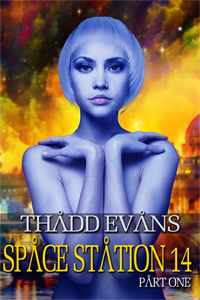 A few days before Vee and I reached MPStation_4, my phone rang. I said, “Hello.”

Captain Tesk’s face appeared in my contact lenses. “I have a new assignment for you.”

“Earlier today, a police detective in Deesp, a town near Space Station Twenty-Three, spotted an Aito woman who resembled Eyhan. Detective Seit could be wrong but this is the only lead we have.”

I glowered, wanting to spend more time with Vee. “Understood.”

“An IC will dock on your craft within the hour and take you to Twenty-Three. Detective Seit will be waiting for you at its interstellar airport. Accompanying text will provide some information. Ask Seit for more details.” The call ended. According to the text, Twenty-Three was on a moon called Haid.

Vee sighed. “I looked forward to us fucking for hours.”

I started fondling her hair. “Duty calls. I don’t have a choice.”

We stood, walked, then entered the lavatory and the door hissed shut.

Vee lay her back against the wall, legs spread. “I’ve got my cat suit on. Hump your bitch’s pussy like there’s no tomorrow.”

I shoved my dick inside her and began pumping.

“You feel so good. Do it harder, baby.” Her head started bumping against the wall. She laughed. “I can’t get enough of you.”

After we returned to our seats, a 3D image of Seit Onq, a six-foot tall Aito humanoid with purple-blue skin, along with text, information including her background, appeared in my contact lenses. Nine years ago, when she was on MPStation_4, Precinct 3, she worked in the detective division. During that time, this colleague arrested sixty-one humanoids, three humans, and two robots. Forty-three were convicted, and both robots were dismantled.

Seit had created many databases, information from the crime scenes. These included DNA, microtubule, odor, high-resolution infrared, RGB, neutrino and ultraviolet scans. When those scans weren’t detailed enough to persuade the jury, the databases included 3D holograms, life size recreations which showed what happened at the crime scene.

For every case that she took part in, her other databases contained each lawyer and every judge’s backgrounds, briefs, affidavits, and videos of every witness and suspect’s testimony. She had received three promotions in four years, an astounding record. This detective was sent to Haid because its department was understaffed.

The SC, a Stellar Carrier, descended, bound for a spot in the Oim Jungle, several hundred feet from Twenty-Three’s interstellar airport. I scowled while glancing at a fellow passenger, a Qio woman with orange skin. “Why are we going to land here?”

She winced. “Good point. The pilot needs to make an announcement.”

The SC touched down. Every passenger headed for the door, frustrated expressions on their faces.

The pilot rushed out of his cabin. “Everyone, due to problems with the ship’s telecom system, I have to tell you in person that the airport’s docking system isn’t functioning properly. We had to land in this clearing. I just called the airport emergency number and left a message. Hopefully, they’ll call back soon.”

A Turon male with turquoise skin said, “I don’t like this.”

We climbed out into pouring rain. The pilot, copilot, and passengers pulled out their laser pistols, then started cutting their way through thick underbrush. In the near distance, a giant tentacle popped out of the mud.

I flinched, horrified. The tentacle grabbed a passenger, a Turon woman’s head. She bellowed, “Help!”

I aimed, but other passengers were in the line of fire, making it impossible to shoot at the tentacle. “Get out of the way.”

They stepped back a few inches.

A slender Turon yelled, “There isn’t enough room for all of us to get out of the way.”

The tentacle submerged, taking the woman with it.

I stepped forward. “It’s too late. She’s gone.” I touched floating number icons in my contact lenses’ field of vision, dialing a number, but only picked up static. “I can’t reach airport security with my phone.”

A muscular Aito man blurted, “Neither can I.”

A stout Turon woman scowled. “The attack happened fast. I didn’t know what to do. I’m not prepared for this.”

I frowned. “Let’s go, before it attacks again.” We resumed cutting, moving slowly. To our right, a tentacle came out of the mud. I shouted, “Duck.”

I fired, but missed the tentacle. Shit.

A short Glemal woman with lavender skin jumped out of the way. “That was a lousy shot.”

I squeezed the trigger, hit the tentacle, and it submerged.

The stout Turon rose. “How many of those creatures are there?”

The short Glemal woman replied, “One is too many.”

We trekked on, working our way through more underbrush.

An Aito woman’s face, a stranger with cyan blue skin, appeared in my contact lenses. “Brin, can you hear and see me?”

“Yes.” Her face vanished while her voice stopped. “I think we have a bad connection.” I winced. My ear-mounted phone dialed. Her face didn’t appear. Static came out of my phone.

My adrenaline pumped harder. “I agree.” To our left, several feet away, another tentacle popped out of the mud. Suddenly, it dropped beneath the surface.

My phone dialed. White noise came out of it. I blinked, angry.

The stout Turon shoved water off her cheek with a trembling hand. “When is it going to stop raining? Son-of-a-bitch, I hate this.”