The woman known only as Riddle is after a ring. A ring that belongs to the powerful, cruel, and increasingly unstable Niona Vie. This personal mission leads her right to Silas Isles, a devastatingly handsome conman with whom Niona has a torrid past—and is now bent on capturing on any cost.

Now, faced with a horrifying fate at Niona’s hands, Silas is forced to rely on Riddle, a woman just as dangerous in her own right. A danger that grows as he finds himself more and more attracted to her poignant, dark beauty… 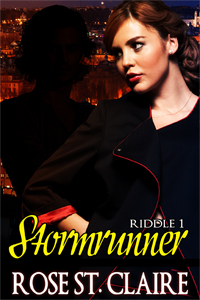 “Smooth, Riddle,” complimented a female voice in her ear. “Very smooth. Since you don’t speak a lick of German, I thought we were going to have a problem.”

Riddle found herself in a roped-off area at the side of the club, enveloped in a frenzy of lights, colors, and sound. Her gaze wandered the premises and the teaming crowd it contained, before she continued up the stairs that lay in front of her.

“I’ve done jobs in Germany before, Djinn,” she said softly, her voice easily hidden in the din of the club.

“Yeah, but did you get stabbed, clubbed, or shot at?”

“Perhaps. But it certainly wasn’t because I didn’t speak their language.”

“Well, yeah, given your occupation and all,” Djinn admitted. “But don’t tell me it wouldn’t help to know the difference between hold your fire and shoot that bitch.”

“I am quite adept at telling the difference between those, German or otherwise. Body language is universal.”

Riddle ascended the stairs and paused a moment to look down over the floor of the club. The music had changed from fast-paced trance techno to pulsing, bass-heavy dubstep. The lights took on warm hues of red and yellow, focusing on the two raised platforms. She was surprised to see that both platforms were occupied by very attractive male dancers, both clothed in sensuously tight costumes. Groups of men and women crowded around the platforms to watch their seductive movements to the throbbing music.

“Anything interesting?” Djinn asked in her ear. That was soon followed by the sound of a keyboard and a shallow gasp as she presumably hacked into a nearby camera. “Holy shit, that’s a nice view.”

“They are skilled dancers, yes,” Riddle admitted, watching them move in spite of herself.

“Bet they’re skilled in all sorts of things.” Djinn said with a giggle. “Oh hot damn, the view’s getting better!”

Sure enough, the two males had begun to strip, sliding off one piece of their costume at a time to the music. The crowd went wild.

Riddle turned away, focusing back on the end of the balcony, where another door waited.

“Awww, such a proper lady,” the hacker teased in her ear. “Come on, you’re missing the best part here!”

“Business before pleasure,” Riddle reminded, looking through the frosted glass door. There were several figures visible through it. “Standby. You may lose me.”

“Got it covered, lady. Looks like there are plenty of little wireless goodies to use in the next set of rooms. Remember, you’re looking for a guy named Jacque Masson. In his forties, not much to look at.” Djinn’s voice took on a joking tone. “Oh, yeah, and play nice.”

The edges of Riddle’s lips twitched in a nanosecond smile. “Hmm.”

With that, she pushed open the door.

The room was sleek and dark, matching the club below. Dim, multi-hued lights lit the expanse, revealing a private bar and leather couches—obviously a lounge for those who Masson wanted to impress. A younger man with wavy brown hair and sharp features, most likely still in his thirties, stood at the bar, fixing drinks. He gave her a slight frown when she entered, then turned his attention back to the cocktails.

A group of middle-aged men had taken up a large circular couch, watching as a gorgeous woman danced in the middle, a mere foot away from them. Wearing a black pair of boots and panties and nothing else, the woman moved enticingly, drawing her fingers over her naked breasts, much to the enjoyment of her crowd.

One of the men Riddle recognized from the picture Djinn had found for her. A middle-aged man with a large nose and leathery skin, watching in barely-contained delight as the blond dancer rocked her hips. Jacque Masson.

A bulky man in a black suit was standing against the wall near the door. A quick once-over definitely revealed him to be some kind of bodyguard, and she noted the holstered gun half hidden by his coat. As soon as she entered, his gaze immediately went to the man tending the bar, and then back to her just as quickly.

Bypassing the overly-enthusiastic businessmen and their entertainer, Riddle strode toward the bar. Again, the bodyguard’s gaze went to the bartender. This time, the bartender looked back, giving a shake of his head so slight that it could easily have been missed if someone wasn’t paying close attention. The bodyguard’s attention went back to the door he was guarding.

It only served as proof of her theory.

Riddle leaned against the bar casually, browsing the selection of expensive liquor on the shelf behind the bar. The brown-haired bartender offered a polite smile and said something in French.

Riddle shook her head. “I’m afraid I only speak English.”

He smirked. “I said, It isn’t often I see a woman in a suit, even in a place like this. But I get the feeling you are no ordinary woman. A new client?”

“It seems we’ll soon find out.”

“You’re brave,” he continued, cleaning a glass, “Most people wouldn’t admit that aloud. It’s seen as a weakness that could be exploited.”

“Understandable,” Riddle replied, “Though I’d much rather have someone underestimate me. I like to keep my strengths hidden...” She paused, fixing her focus on him, “... Much like you, Jacque Masson.”

His smirk widened into a smile, though the strain proved it wasn’t as genuine as he wanted her to think.

“Clever. Or maybe just well-informed. Both are traits that are quite useful. It’s not often I get to talk to a potential client face to face.” He waved a hand behind him. “Let me get you a drink.”

Riddle nodded, her lips forming a slight smile. “As it would be bad form to refuse such an offer, a gin and tonic, please. Though I must insist you have a drink with me.”