Darkness. Thunder rumbles. Lightning strikes. A timeline vaporizes. Cyclonic winds tear at the fabric of reality. Is the storm natural? If not, who created it and why? There’s no escape. Cilla must brave the anomaly to discover the answer. Will the hurricane force winds shred her into minuscule time segments? She has no choice—with no way around, she has to enter. 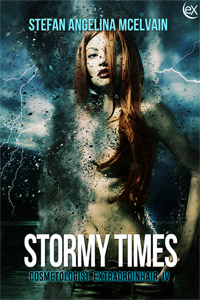 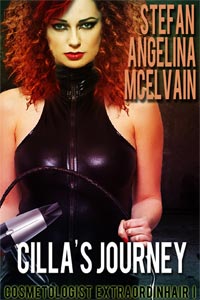 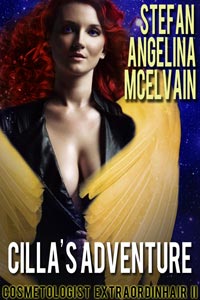 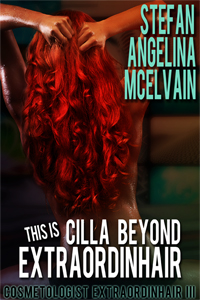 This Is Cilla Beyond Extraordinhair
Stefan Angelina McElvain
In Shelf
$4.99

I was driving down Sunset Boulevard to one of my favorite clients’ home in the Palisades and looking forward to trimming Mildred’s hair. The future doesn’t have a cloud in the sky…future memories flooded back. I mumbled, “No, I don’t believe it. Is that a black thunderstorm on the time horizon? It is, and it’s heading my way.”

I pulled over and stopped.

Time is unstable. I can hear the thunder rumble. Tornadoes touch down tearing up time. That lightning strike destroyed an entire timeline. I have no idea how to stop it. What’ll happen when it hits?

I don’t like this ability to move within my own life. Sometimes it works. If life’s not working out, I rewind time and try a different approach—again, and again, and again. This isn’t a paradox—it’s outside of the space-time continuum. I like to think of it as my own personal what-if analysis.

I can’t see beyond the storm. Where did my futures go?

Is this one of those pivotal moments?

I closed my eyes and controlled my breathing. Relax. I’d better have a closer look at my options by stepping outside of time.

I stood on a small hill. Lush green grass ran to the horizon in all directions.

Looking backward, I saw some of my choices to reach this spot and relived them.

The pain of letting my lover, Xared, die in a blast of energy. Could I have saved him? Yes, but thousands would have died in the war between No Boundaries and Trans-galactic that would have followed. I’d been forced to let his death be.

The euphoria of saving Gilly from the worm that possessed her. She lost a few years’ worth of memories, but much better than being brain-dead.

The tingling anticipation of what Tim was going to do to me. Blindfolded, wearing my neck choke, wrist and ankle restraints, waiting, and then realizing he wasn’t alone. He awoke my sexual desire for men, making me a nymphomaniac.

Looking forward, the entire horizon was black with roiling clouds. Lightning flashed, and a few seconds later, the ground vibrated in sympathy with the low-frequency rumble of thunder. If anything, the storm’s accelerating toward me. Where did it come from? What happened to all my possible futures? All I see is the storm.

A window in my mind opened. I saw my other-self, the consort of the Wronski leader, Pual.

“Yes, Pual and our son Pualcil see it too. In all of the Wronski’s history, this phenomenon isn’t recorded. All future paths, not just ours, but the entire Wronski race, go through the heart of this time storm. There’s no escape and no way around. We’ve tried, and nothing we do makes any difference.”

“I can’t see what’s on the other side. The myriad of possible futures that were so clear have disappeared. I have no future memories. It’s as if someone or something has erased them. Do the Id or the Quinox races see it?”

“No, they’re not sensitive to time as we are. Whatever this is, it’s aimed solely at beings such as us.”

“You think it’s a weapon and not natural?”

“How would you battle a being who can see the future?”

“That’s our conclusion as well. It levels the playing field. We lose our advantage.”

“You think No Boundaries or Trans-galactic are behind it?”

“It’s not proved, but a possibility. We don’t have much time to discover the cause and stop it.”

Numerous windows opened in my mind. In one, I traveled in a sentient spaceship. In another, I was in hiding on the home planet of No Boundaries. In yet another, I’d left my physical body behind and lived with the Id—basking in a young sun’s life-giving radiation at the edge of one of the Galaxy’s arms.

For a brief moment, we merged.

The information overload was too much for even my worm enhanced memory.

I can’t retain it all. There’s too much data.

The only thing I gleaned—not one of us had any idea what was going on.