In this candid account she explains exactly what that means and what exactly an independent, 21st Century woman gets out of relinquishing her power and personal freedom to a dominant man for their mutual pleasure. From the endorphin rush of her first spanking right through to being collared, Kate explains in frank and explicit fashion the road she travels as she reconciles her sexual needs with the rest of her life. She'd call it her journey if, in the current climate, that didn't make her sound like a reality TV reject. Suffice to say, if you've ever wondered how, when and why a woman would beg someone to cane her until she comes - or if that's even possible - then this is the book for you. And if you haven't, well this book will give you an insight into the deep end of a dating pool you never knew existed.

Daring, controversial, but always fun and astoundingly honest, Subtext will be a book no reader can put down. 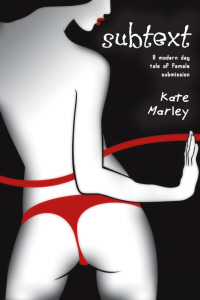 I turned round, my fingers still on my stinging arse, to see his eyes wide and innocent, his smile wider as he waved the paddle brush in front of me. ‘You said I could use it.’
Feeling like I was standing on the edge of something amazing that I had been waiting for years to experience, I smiled back at him, screwing up my courage, giving him the permission he was hinting at. ‘You’re right. I did.’
Serious hair needs a serious hairbrush and that is what it was. As he pulled my knickers down, pulling me across his lap and started smacking me with it, the noise ricocheted across the room, leaving me worried about what on earth my flatmate would think from next door, at least until he’d been going for a few seconds, after which point I really didn’t give a toss.
I had often wondered what a good hard spanking would feel like. But in a million years I would never have expected it to feel like this.
It hurt, obviously. A lot more than I was expecting – you can tell I’m of the generation that didn’t get corporal punishment in school. The air whooshed from my lungs with each impact for the first few hits, and all I could think of was how much it hurt – definitely not the sexy paddling of my secret fantasies. In a panicked inner monologue I was trying to decide whether to put a stop to it or just try and withstand it until he moved on when, suddenly, the sensation changed, blossomed almost. It still hurt, but the sting of my arse melted to a pleasurable ache in the seconds after the impact and, as the adrenaline pumped through me, suddenly even the pain of the initial hits was blurring with the warmth of the pleasure I was getting out of it.
He’d started on my left cheek, hitting me in a regular rhythm until my heart was practically beating in time with his tempo, my body responding to the slaps of him beating me. He varied where the brush landed until the whole of my arse cheek was warm and I was squirming across his lap in an incoherent bundle of nerve endings. In that moment my world was him and me, the stinging warmth of my arse, the wetness between my legs, the feeling of his cock hard against my thigh as I wriggled against him. If he’d asked me what I wanted him to do, if I’d been capable of forming words, I’d have been begging him to stop as the pain was on the edge of becoming too much. But at the same time the warmth between my legs meant I knew with utter certainty that, if he had stopped, within a few seconds I’d have been pleading for him to continue. I didn’t actually get the choice, which is just as well as, by that point, there was no way I was capable of speech.
He switched cheeks, and the process began again. But as I tried to temper my reaction to the pain, I felt a finger slide along my cunt lips, and easily – so easily that I was glad I was facing away so he couldn’t see the sudden blush on my face – he pushed inside me.
By this time I was practically writhing on his lap, my breathing heavy, tears behind my closed eyes. He didn’t hold back on hitting my arse with the brush, and, as I turned to look up at him, I saw the flush of exertion and excitement on his cheeks, and an expression that made me whimper. He looked so sexy. The look in his eyes, the way he held his head, had changed him from the Nick I had previously known. I couldn’t take my eyes off him. He was power. Control. He made me feel warm and cold and excited and nervous and like the whole world was being turned upside down and all I could do was hold on for the ride and trust him to lead me through it.

Safe and Sound
Lucas Steele
In Shelf
$4.59
Tweets by
sirenbookstrand