The Fist by G R Richards

When The Fist finds a slab of shortening in Deepack’s locker, he wants to know what it’s for and he just won’t let it go. In the end, things get very heated on the factory floor and a crew of turned-on men can make a lot of noise. Eventually, they have to turn the compacting machine on to mask their yells of excitement.

Tim, the sparky, is on the job when he catches his bosses, Elliot and Dan on the job too. Unaware they know he’s watching he ‘enjoys’ their display. The next day, Elliot accuses him of being a pervert and says he’s going to teach him a lesson he won’t forget in a hurry. Tied to the bed with his own wire, Tim is in no hurry for the lesson to finish.

Unleashing A Demon by Eva Hore

I knew I was gay, but I wasn’t sure if Brad knew what he wanted. So when we end up alone on a hot nudist beach, I’m nervous as well as excited. But it isn’t long before Brad is making some pretty hot moves.

The Running Man by Jade Taylor

Matt loves running, but the thought of his sexy next-door neighbour, Josh, always has him running faster towards home than away from it. He’s too shy to make a move but then Josh asks him to help move a box from his wardrobe.

‘I told you to hit your prick,’ The Fist growled.
‘Sorry,’ Deepak sighed. He took it in hand and pumped. When The Fist traced his greased-up index finger around his asshole, he closed his eyes and tried to relax. Even one finger could be a task if he wasn’t ready. He breathed deeply as The Fist ploughed him with the first finger. He could hear Walter gasping even as he sighed with pleasure.
The Fist offered some encouragement as his greasy finger moved in circles. ‘Deep, you got a tight little pussy-hole here, don’t you?’
He pumped his cock slowly. He wanted to make his erection last as long as possible. ‘I’m sorry,’ he said. ‘I know it’s tight.’
‘Hey, don’t sorry me,’ The Fist laughed. ‘You’re the one who’s going to get a fist all up in there.’ He grabbed hold of Deepak’s thigh as he shoved a second finger inside.
Inhaling sharply, Deepak stroked his dick from base to tip. If he were just pounding one out, he’d go straight at his cockhead until it sprayed jizz. But he wanted to make this one last. For The Fist.
Three fingers. ‘Tight fuckin’ fit,’ The Fist said. Like he knew the half of it. Three fingers to the knuckles. Deepak tugged his meat while The Fist plunged inside. Firm, greasy fingers fucked him good. 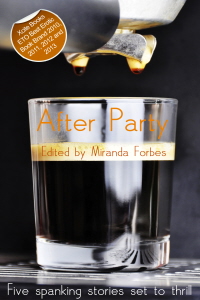 After Party
Miranda Forbes
In Shelf
$2.99

Draw Me Out
Shannon Pearce
In Shelf
$1.50