When certain death comes after a society, plans change in the blink of an eye. Decisions get made quick. Move or miss the Marrott because virtue speaks more to the character of a being. 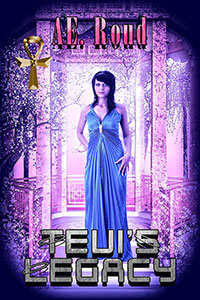 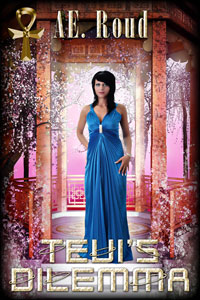 When Tevi woke the next morning, Kintar was not in bed with her. Not unusual, as he always rose from bed early, even after a long, sweaty, sex-filled night. As she stretched, she looked out the window and expected to see sunlight, but instead saw darkness beyond the window frame. Where is the sunlight?

A bit alarmed, she sat up and looked around.

A light fog floated around the room. She looked at her body and saw the shimmer. She thought a moment about the situation. This shouldn’t be possible, but I am here, so it is possible. Why is it I am the one to find out that things said not to be possible are possible? And why is that information not in the scrolls? We’ll have to fix that.

Until that moment, it was believed the Ancients could only pull a Royal to their plane of existence when they were on the Royal Marrott. However, Tevi’s current experience proved that belief wrong. Her temper rose as she realized the full extent of their intrusion.

Min was not anywhere near her. He was in orbit somewhere around Oredal Prime, and the Tomb was on Min. In the dead of the night, the Ancients found her on Oredal Prime, in the largest city on the planet, in her specific neighborhood, and pinpointed her private home from among tens of thousands of homes.

She looked around, then spoke to nothing and everything. “Your reason better be good for what you have done. The way you did this is not supposed to happen. What do you want?”

A bright orange light emanated from what in Tevi’s real bedroom was a wall and lit up the area. The intense brightness Tevi felt as heat. She shielded her eyes from the brightness with her arm. The intense light began to burn her exposed skin.

The illumination lessened to a level that Tevi could stand, but even for those brief seconds of exposure, the intensity of the unshielded Ancient left Tevi with a burn.

In the Ancients’ realm, she was at their mercy. One good thing of being in their realm, no matter what they did to her while she was there, she felt no pain or discomfort. Once returned to her reality, there she would need to deal with any pain or injury.

The unshielded Ancient morphed into a form that Tevi recognized as Kintar. The rainbow eyes looked at her. “Do you know where you are?”

“I know, although I do not know how this is possible. Min was nowhere close to me for a reason, yet I wake and find myself on the Ancient level. That’s not supposed to happen.”

The rainbow eyes swirled in their sockets, as the Ancient assessed her.

“What is of such urgency,” Tevi continued, “that you rip me out of my body and reality?”

“You are angry,” the Ancient said.

“You think?” Tevi snapped. “Am I not allowed to get angry when you Ancients do something to me that interrupts my life in ways that are not supposed to happen? How dare you! In my reality, my body is in a coma, unattended, so do not keep me here long.” She stood. “What do you want?”

“Your body is safe. We prodded the Marrott of this form to wake her partner to the change of your physical state. Your body is in the care of Dger. We need you alive.” The Ancient looked at her and smiled. “In your reality, many weeks have passed since that night.”

That revelation reminded Tevi of the different way time worked between her reality and that of the Ancients. On the Ancient level, time was of no matter. A few moments on the Ancient realm however, meant days passed in her reality. “What is this about?”

The rainbow eyes stared at her a moment. “The future for our creations is without form.”

The words sounded garbled to Tevi. “What? Your words make no sense to me.”

At that moment another Ancient appeared from the foggy area in the distance and approached.

Tevi and the Kintar Ancient looked at the newcomer, and Kintar bowed its head and backed away.

Tevi knew this new Ancient. His name was Ginlath. He was tall with wide shoulders, and silver white waist-length hair. She’d spoken to him several times in the Tomb during her time as an Oredal Royal. His presence, then and there, told her something was very wrong.

Ginlath looked at the Kintar Ancient. “You can leave now.”

The Kintar Ancient disappeared into the fog.

Ginlath looked at Tevi. “I am sorry about that Ancient. Untrained and near overtaken.”

Ginlath smiled. “Yes and no. We never send out an untrained without a trainer, but that trainer was weak.” He sat down on the bed. “It’s been a long time, Tevi.”

Tevi nodded. “Yes, it has been. Now tell me why I am here and get me back to my reality. The less I am here the better. I’ve already been burned.”

“Easier to show you,” Ginlath said. “Tell me what you see.” He waved his hand toward a foggy wall.

Tevi saw a small light, then a massive explosion and colorful waves move out into darkness and understood the symbolism. “Okay, the big bang.”

“Okay, creation of solar systems, life on planets, in the wake of what we call the big bang.”