The Elements of Love

On a world at war, the Four Elements hold the key to balance and peace. An ancient prophecy first demands they surrender to undeniable passion.

Two tales of love and fantasy.

War rages between the Lands of the Moon and Sun. The Healer of Water, Arlynn, touches the scarred Fire mage Myrric. The steam of their passion alters Arlynn’s powers forever, sending her on an odyssey to fulfill the ancient prophecy of peace for a world on the brink of destruction.

Village smith Grelig stops a slavegirl from stealing his lunch, but not his heart. Attempting to free Shayla from her cruel master, Grelig stumbles on a Trine of Evil and discovers that to spare one girl, he must first save his world. 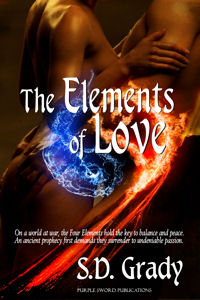 The Elements of Love

As Arlynn’s pale blue gaze locked on Myrric’s black glare, a shockwave of power surged between them. Myrric looked stunned.

“What have you done to me?” he asked, his gravelly voice weary and scornful.

Arlynn looked up at the general present. “I need some time alone with the prisoner, sir.”

The cynical, grizzled man with a short sword at his waist shook his head. “Your efforts to heal the High Mage would be wasted, Healer. Either Myrric will stand for us during the next battle or he will be executed for his crimes. Don’t waste your powers on him.”

Arlynn struggled to find an answer. She knew she had to have something from the beaten and bloody man before her. Even now, the power arced between them, invisible to the clerk and general. The spell he had begun to cast on the battlefield was not complete yet. Arlynn needed to finish it, or never heal another person again. Her powers, released during their kiss, were now locked up tight in the spell.

She settled for telling a half-truth. “Even so, general. I cast a healing spell on him, and it was incomplete. I must finish it before my powers can be used for the benefit of our troops. I was unaware of his identity when I began.”

The general appeared to consider this. After only moments, he executed a short bow. “As you require, Healer. The clerk and I will leave you.”

“When I woke, I had no powers. What have you done to me?” he asked in a hard tone.

“Nothing more than what you did to me,” she answered evenly. She reached towards his arm. He flinched, but his restraints held him in place.

“You were casting a spell before you passed out on the battlefield,” she murmured as her hand settled above the burns on his arm. Power and passion erupted between them. The blue peace of healing waters lapped against the crimson sparks of fire.

Arlynn watched Myrric fight the odd effects of their melding.

“What were you casting?”

His mouth grimaced. “A fireball.”

She considered. “So, you did not get the chance to send the power out from you. It now sits in me.”

His black eyes watched her carefully.

“But my power lies in the oceans, not the fires.” She paused seeking for a way to let him understand what was happening. “The surge of power I took from you ebbed away for a bit on the tide. Now it is a cresting wave, and it needs to be used somewhere.” She bit her lip. “I could heal you. Your power would be restored, and our armies would not withstand the next blast you send our way.”

He began to twist, pulling at his bindings.

She stood, settling her hand on his cheek. He stilled. “But then my powers would ultimately be used to hurt, not heal. I could not bear that.” She bent over, his breath heating her lips. “But such power…it must be used for something.” Sparks began to fly through the air.

Myrric eyed the temptress before him. Myths and legends were passed down at the School of Fire and War of a woman made of water, light and joy. Surely this could not be she, with eyes the color of the sea and a touch that set his blood boiling.

“Let me help you, Myrric,” her moist lips whispered. “Let me take all the anger away. Let me give you joy.”

“Joy?” he laughed roughly. “I have never known joy. It is not for men such as me.”

Her fingers, soft and agile traced his cheek. Memories of heat and contentment surged forth.

“Nonsense, Myrric. What you have given me I am not sure. But I do know what I cannot do. I cannot allow you to take that power and kill more people.” Her breath teased the small hairs near his left ear. “I can only heal.” Her hands demanded more as they crossed his chest. “I can only love.”