The Evolutionary Imperative: Why Change Happens, Where It Leads, and How We Might Survive

The Evolutionary Imperative provides a unifying perspective on the evolution of the universe in all its physical and biological detail, with a call to action for redirecting the evolutionary trajectory of human society in a way that will preserve the planet and improve the human condition.
The book's thesis is that the inevitability of change is driven by resolution of energy gradients through the operation of two fundamental laws of nature: the Principle of Least Action and the Second Law of Thermodynamics. This energy dissipation model of the evolutionary imperative accounts for all the organization of matter and energy that has ever come about; the diversity of everything from rocks and rivers to microbes and macro-organisms; the behavior of animals, the elements of culture, the structure of societies, the operation of economic systems, and the moral codes we live by. The reality of this flowing tapestry of energy and information through the cosmos, the earth, and the life of all living things offers a transcendent view of the world, and the place and fate of the human species within it.
But abetted by technology in human hands, the accelerated pace of change has begun to degrade the environment to an unsustainable degree, and has led to economic and social inequities that threaten social stability. A possible solution to the impending catastrophe is that humans switch from energy consumption to information processing. While programed for energy dissipation by our biological heritage, we are capable of converting to the processing of information as our ultimate calling.
The book is written in straightforward language at the undergraduate collegiate level. While providing novel scientific insights and ample detail, its broad strokes and basic message can be appreciated without advanced training in science.

About the Author:
Charles H. M. Beck - Born in Chile but raised in Ontario, Canada, Dr. Beck received a bachelor's and master's degree from the University of Toronto, and a PhD in Psychology from Pennsylvania State University. His postdoctoral training at the University of Pennsylvania was followed by an academic career from Assistant Professor through Professor Emeritus at the University of Alberta, where he was honored with a Rutherford Award for Teaching. He has published over 40 scientific papers, mainly in the areas of psychopharmacology and operant conditioning. In 1995, he developed and supervised the Faculty of Science Department of Psychology paid internship program, giving undergraduates a year of work and research experience in the community. An accomplished outdoorsman and artist, he has written broadly about science, society, and the human condition.
Louis Neal Irwin - Born and raised in Texas, Dr. Irwin earned a bachelor's degree in chemistry at Texas Tech University, and a PhD in biochemistry & physiology at the University of Kansas. He has held teaching and research positions at the College of Pharmaceutical Sciences, Columbia University, the Wayne State University School of Medicine, the Neurosciences Research Program of M.I.T., Simmons College, and the University of Texas at El Paso, where he is Professor Emeritus. He has published over 70 research papers and reviews in neuroscience, evolutionary biology, and astrobiology, has authored a neuroscience memoir (Scotophobin), and co-authored two books in astrobiology (Life in the Universe and Cosmic Biology). He also writes periodically on issues of public policy, science, and society. 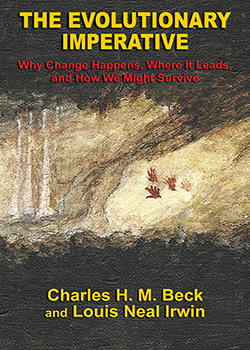 The Evolutionary Imperative: Why Change Happens, Where It Leads, and How We Might Survive