Arlyn, bored with her life in corporate America, is confronted with more than she bargained for when she meets handsome, muscular and commanding Kai. Unable to understand why he is reluctant to reveal aspects of his life to her, she finds out once he introduces himself as King Kai. Come along as Arlyn is swooped into his world and join her as she fights for her freedom as hard as she fights off the love she feels growing for the man who has her in his overpowering grasp. 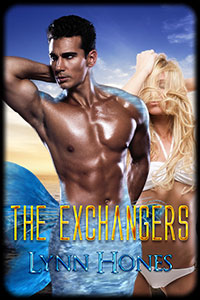 The Exchangers
Lynn Hones
In Shelf
$3.99 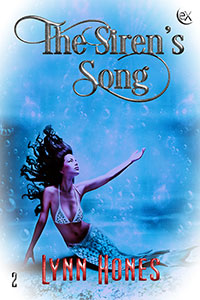 “Arlyn means waterfall. I’m an Aquarius and my parents were hippies. Sue me.” Getting trashed at Drunkin’ Joes was about as classy as it got for Arlyn.

“Well,” Brooke said, “more than half this city is named for some form of water. Drives me nuts.” She took a sip of her wine. “Hey, Calder,” she yelled out. “How do you like your name? I mean it’s waterish... doesn’t it mean something waterish?” It was painfully obvious she’d had one too many.

Calder, drying a glass with a white beer rag, answered in the positive. “Yeah, I like my name. It means rocky waters. I like that because sometimes, I’m calm, and sometimes, I’m really rough.” He winked at Brooke.

“Oh, God, Calder, how can you be so insensitive to a poor, lonely woman who is drooling over you?”

“I can do it,” Calder said, “because if it went any further, it would ruin our friendship, and I value it. That’s why.”

Brooke hiccupped. “Okay, you win. I’ll stay just friends.” Brooke commented on the bar stool spinning when it wasn’t, and Arlyn and Beth helped her off and half carried her to the door.

“Tonight’s her turn to get sloshed,” a disgruntled Beth said. “Next time it’s mine.”

Calder threw a rag at them. “Get her outta here,” he yelled. He smiled afterward, joking only the way a group of people who have known each other their whole lives can joke.

Once they got Brooke to bed, the other two roommates talked. Beth, a smoker, pulled a chair over to the window, sat, put her long legs up onto the windowsill, and lit up. “Are we getting old?” she asked Arlyn languorously.

Arlyn, sitting on the settee in the middle of the room, pulled a small blanket over her legs to ward off the breeze from the window and put about three seconds’ thought into the question before she answered. “I don’t feel old. I mean, twenty-eight’s old to an eighteen-year-old, but to a forty-year-old, we’re young. So, to answer your question, I don’t think there is a young or an old, it’s all relative.”

“Is Brooke old?” she asked, laughing.

“Now Brooke... Brooke’s a whole different story,” Arlyn replied. “She’s sophomoric. Always was, and when she’s eighty, she’ll still be sophomoric. There’s no hope for that one.”

“Really, though,” Beth continued as she inhaled her cigarette and blew the smoke toward the window. “I see people at work who are my age with two kids already, and I think is it just us Harbor kids who never grew up? I mean, the only ones who did grow up are the ones who moved away.” She took another long drag of her cig. “Look at you, for instance. I mean, you of all people shouldn’t be stuck in this tiny town. We always said you’d be the one to make it big.” She looked over at Arlyn.

“Well, gee, thanks, friend,” Arlyn said half-heartedly. “Love you, too.” She pulled the blanket up closer to her chest.

“You know what I mean.” Beth put her cigarette out in the only ashtray they had in the apartment.

“I know,” Arlyn answered. “I couldn’t help it if I enjoyed learning.” She plumped the pillow behind her head and lay down.

“You still do,” said Brooke. “You’ve worn the button off the remote for the Discovery Channel.” She took out another cigarette and then, as if thinking better of it, put it back. “It isn’t just your mind, it’s that body, too. Oh, don’t get me started. I mean, hell, I’m not half bad myself. I don’t know why I always have to put myself down.”

“I don’t either,” Arlyn replied. “And you have a great boyfriend, Beth.” Arlyn looked away longingly. “I’ve always thought Mr. Right would simply knock on the door of this apartment and I’d be swept off my feet, but now−not so much anymore. I feel lonely a lot.” She looked over at her friend. “But guys aren’t the only thing. I have to stop putting myself in waiting mode and move on. Okay, now I sound like a motivational speaker. Listen, kiddo. It’s getting late and we have work in the morning. Let’s say we call it a night.”