Mel met Bill at her Pilates class, the only man in a group of ten women. Though she was impressed with his toned body and self-assuredness, he turns out to be far from reliable, standing her up at the cinema. But while at first she’s self-conscious about seeing a film (Kill Bill, no less!) by herself, the apprehension is short-lived when a sensual game of foreplay begins in the darkness. But what happens when the lights go up?

The Tie Breaker by Phoebe Grafton

Gerald might make a good chairman at the tennis club, but his tennis is much like his performance in the bedroom these days; disappointing. He can hardly be compared to the likes of Federer and Nadal! Which is why his wife is on the look-out for unattached players when it comes to mixed doubles. When new member Paul first arrives at the club, she decides to put him through his paces, and after a passionate back-and-forth rally, his “play” does not disappoint. 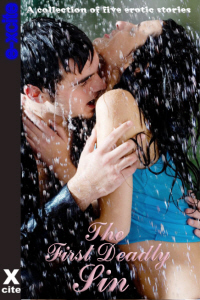 I trailed my hand up and down his thigh. Adam quietly fingered the beads of his rosary while I stroked his leg. Maybe it was the heathen in me that my Baptist preacher never could quite talk away, but I found myself growing wet at the very thought of fucking Adam in a church. I don’t know where the idea came from – maybe it was that polished table that boasted a long sentence in Latin, then below it: ‘Do this in remembrance of me.’
‘Adam?’
‘Hmmmm?’ He seemed to be almost asleep.
‘I want you.’
‘To do what?’ he asked.
I snickered. ‘No, silly. I want you.’
He looked down at me. I looked into his eyes, making sure he understood that I meant exactly what I said. ‘I want you to fuck me in this church.’
Adam started to laugh. I didn’t. He sobered very quickly.
‘You are serious,’ he stated flatly.
In response, I took the rosary from his hand and pressed it hard to his crotch. He grew hard almost immediately, despite the wide-eyed look of astonishment in his eyes. I moved the smooth beads around the outside of his shorts, then slid them up inside the leg of them to press them against his balls. Adam’s hand covered mine to pull it away, and then he hesitated as I slid the beads up his hardening shaft.
I circled my hand around his cock and laced my fingers through the rosary. I slid both up his body and he exhaled the breath he had been holding, groaning softly into my neck as he opened his mouth and bit down. I gasped in pleasure as the wetness started to grow between my thighs.
‘This is wrong,’ he protested half-heartedly.
‘Do you think so?’ 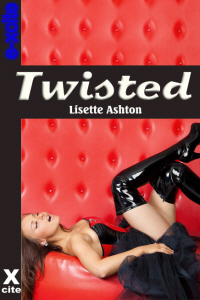 Boating with the Buttermores
Randall Lang
In Shelf
$2.50 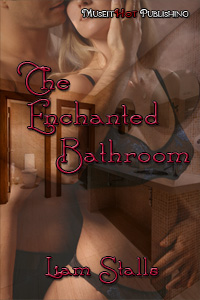 All the Way
Giselle Renarde
In Shelf
$4.99
Tweets by
sirenbookstrand