The Ghetto is the hottest attraction in Atlantic City, an adult fun house where the frights aren’t supplied by skeletons and goblins popping out of the dark, but by ghetto scenes played out in front of the audience. When a loud mouth patron and his companion are executed, the audience howls with delight. After all, it was all part of the show. Or was it? 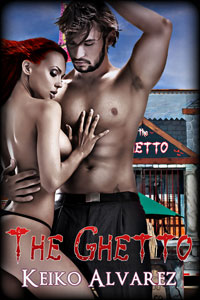 The man in the suit smiled and walked towards Ricky and Kristy. When he was less than three feet away, he asked, “A friend of yours?”

“Not our friend,” Ricky blurted.

The man in the suit backed up and shouted, “Is he anyone’s friend here?”

Someone called out, “I don’t think he has any friends.”

The man in the suit ambled over to Frank. “Looks like you’re alone,” he said.

“I got Connie here,” Frank laughed.

“Are you desperate, Connie?” the man in the suit chuckled.

“Oh, really?” the man in the suit snapped. “What about the actors you insulted?”

“Is it?” The man in the suit put his hand in his pocket, pulled out a revolver and smashed Frank on the side of the head.

Frank screamed in pain and fell to his knees.

“Hey,” Connie shouted. She dropped to Frank’s side and tried to help him up.

“Come here, honey,” the man in the suit growled. He grabbed Connie’s arm and dragged her away from Frank. When she was in a dark part of the scenery, he appeared to punch her in the stomach. She began to moan and cry. The man in the suit returned to Frank. He hit him in the head with the gun again and pulled him to the center of the scene.

The man in the suit shouted, “What should I do with this asshole?”

“Kill him!” someone replied.

Soon the audience was chanting, “Kill him! Kill him!”

“If you insist!” the man in the suit laughed. He aimed his gun at Frank’s head and pulled the trigger twice. The entire scene lit up with each blast from the gun while loud explosions rang in the audience’s ear.

The man in the suit faced the audience and yelled, “What about the bitch?”

“Nah, kill her, too,” someone else shouted.

Again, the audience was again chanting, “Kill her! Kill her!”

“If you insist,” the man in the suit mumbled. He aimed his pistol at the sobbing woman and pulled the trigger twice, again assaulting the audience with harsh bright lights and loud explosions.

“What a fucking hoot!” Ricky laughed.

“That was the first part of this stupid show that I enjoyed,” Kristy giggled.

Twenty minutes later Kristy had her head buried in Ricky’s lap. She was trying to gain her composure while Ricky talked with a uniformed policeman. “Don’t you get it?” he said. “We thought it was part of the show. I mean, we probably would have helped, especially the lady, but…”

He wilted under the dismissive stare of the cop, and his voice trailed off. “Don’t you get it?” he mumbled.