Sienna Sinclair thinks she is just another typical teenage girl who is trying hard to fit in with the high school crowds, which she feels alienated by. But when she is contacted by Sabian— a handsome and mysterious member of an ancient secret society, she is led to an unexpected journey where she encounters vile hybrid creatures and mythical beings and is admitted to Astarte Mystery School where she learns to awaken her inner-powers that will prepare her to realize she has a secret and powerful destiny: She is a Starseed. 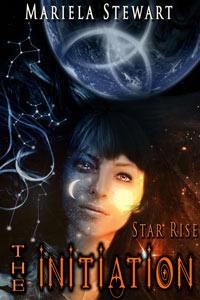 The trickling sound of rain falling on a lily pad woke me from my slumber. Where am I? Then I remembered. My life slowly flashed before my eyes.

The grueling pain of stab wounds on my legs and abdomen were beginning to vanish, while numbness had overtaken any sensation in my frail body.

How did I get here, you ask? Well…my story was like so many others, although I assure you mine has somewhat of a twist. Since this may be my last day living, I at least need to share my arduous journey, so I do not die in vain. Everyone needs to know the truth. My story starts a little like this.

In a time long ago, ancient demonic predators roamed the earth, searching for weak souls to draw the energy out of their feeble victims. They took their life force until there was no more light pulsating inside them. All virtue ceased to exist within their once pure hearts.

These stories—with roots going back more than 5,000 years—were tales of demons and angels, wizards and sorcerers. The tales of the cosmic fight between good and evil were told repeatedly. I omitted some details, others modified, but the very core never changed. The fight would never cease.

It’s funny to think of these stories now as I lay at my deathbed, life-energy seeping out from my soul into their hands, their demonic hands pulling with determined intent after years of searching, an ill-fated pursuit to find me.

Maybe if I had believed these tales and known the truth behind them, I would not be here now…maybe.

I could now feel the damp earth beneath my limp body and sensed that she would take me back into her arms and swallow me whole, so I could return once again into her fertile womb.

Those eyes—that have pierced deep within my soul—have been my fear, my curse, since my brethren reunited. They knew how much stronger, knowledgeable, and powerful they would become once they were done with me. They would never stop. If only the Council had destroyed them when they had the chance.

My thoughts went back to him. I wanted to be with him at my life’s end, even if it was just in thought, until I died. His memory embraced me. It gave me comfort and, for once, I felt safe. I knew I would see him again, in some other time, some other place…I would be with him once more. This little I knew.